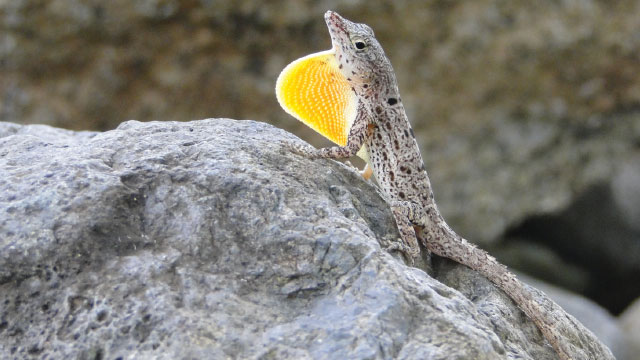 It’s not easy to snare a lizard. Evolutionary biologist Michele Johnson affixes a noose made of dental floss to a telescopic fishing rod to reach into the bushes and tree canopies where Caribbean anoles live. By the end of the summer field season, her students from Trinity University in San Antonio, Texas, develop a knack for it. “We almost always catch our lizards,” says Johnson.

She doesn’t just collect field measurements and observations; she’s taken 30 different species of anoles back to her lab to analyze their physiology. Anoles have become a favorite model for evolutionary biologists because of their extraordinary diversity—there are more than 400 species in genus Anolis—and because of how they originally populated the Caribbean islands. The relative scarcity of mammals, snakes, or birds on the islands left...

As anoles—which also inhabit Central and South America—reached individual islands, their populations diversified into island-specific forms that occupy certain niches. For example, each of the four largest islands in the Greater Antilles (Hispaniola, Cuba, Puerto Rico, and Jamaica) hosts one or more species that are green lizards hanging out in the lower canopies of trees, and another group of short-limbed, slow-moving reptiles that perch on twigs. These are two of the six “ecomorphs” that scientists who study Caribbean anole species have defined. To be considered an ecomorph, a set of habitat specialists must exist on more than one island, though the species in each group differ between islands. And yet, other anole species belong to no particular ecomorph class.

Caribbean anoles offer scientists a sort of “natural experiment,” explains Luke Mahler, an evolutionary biologist and herpetologist at the University of Toronto. Each isle, with similar environments, acts as a replicate for how anoles underwent convergent evolution into ecomorphs. As a result, evolutionary studies of anoles have flourished in the past couple of decades—think Darwin’s finches, but scalier.

“They really are a good model system for lots of questions, from very small-scale molecular work all the way up to adaptive radiation,” says Jerry Husak, a physiologist at the University of St. Thomas in St. Paul, Minnesota.

The basic anole ecomorphs go way back in evolutionary history, found Jonathan Losos, an evolutionary ecologist at Harvard University. Emma Sherratt, now at Australian National University in Canberra, got a hold of 20 fossil anoles while a postdoc in Losos’s lab. The fossils dated back 15 million to 20 million years, when the lizards were preserved in amber on the island of Hispaniola. Some were in museums, others in private collections. Using CT scans, the Losos team examined anatomy to confidently assign these fossils to four of today’s ecomorphs; a couple other fossils might be part of a fifth (PNAS, 112:9961-66, 2015). “At least several of the habitat specialist types already existed,” concludes Losos.

Despite the countless hours biologists have spent studying Caribbean anoles, the genus seems to have plenty of surprises still in store. In addition to her ongoing studies of physiology and behavior in diverse anole species, Johnson has recently focused on how her local Texan anole, Anolis carolinensis, determines dominance. A. carolinensis, like many other anole species, adopts a strict mating hierarchy in captivity, with males battling each other for access to prime habitat and to females. In the field, the hierarchy is more complicated—a lizard defending his own territory is more likely to win a fight, she thinks. She figured the biggest males would also be more likely to triumph, either in the lab or the field, and thus achieve larger territory and more females to court.

In order to correlate body characteristics and behaviors with dominance, Johnson’s group set up a sort of lizard fight club, pitting anoles against each other in one-on-one cage matches, with a single perch to battle over. Winners tended to execute more visual displays, performing push-ups and head-bobs and expanding the showy throat skin known as a dewlap. They also chased and bit the losers, who tended to back away and to hide in a corner.

But larger anoles weren’t always the winners in captivity or in the field. “Body size doesn’t predict who wins these fights at all,” says Johnson. Instead, behaviors made a huge difference—the most aggressive lizards won their matches. A longer head also helped, perhaps because it looked to opponents like a serious biting weapon. In the field, animals with a wider head and powerful jaws occupied larger territories with more females present (Anim Behav, 118:65-74, 2016).

Body size still probably matters, Johnson says. She has not yet tested in field studies whether size might help an A. carolinensis male establish his territory or take over a vacated area. And at least in other anole species, bigger males sire more offspring.

Mahler also got a surprise from the anoles when, in 2010, he received an email from Miguel Landestoy, a Dominican naturalist who claimed he’d seen a new species. Mahler was initially skeptical. “Everybody thinks they’ve got a new species,” he says, yet “the Caribbean anoles are the best known anoles, by a long shot.”

Then Mahler opened Landestoy’s pictures. “Holy crap,” he said. “That doesn’t look like anything we’ve seen on Hispaniola.” The critter was huge, by anole standards—about a foot from nose to tail tip. It had short legs, a short tail, and a mottled greenish-gray pattern that suggested it could easily blend into a mossy or lichen-covered branch. “I bought the first cheap flight I could find,” recalls Mahler.

The other thing that struck Mahler about the new species—which he and his colleagues dubbed A. landestoyi—was that it looked similar to anoles found in Cuba. Their clade is called chamaeleonides for their creeping, chameleon-like movements and camouflage prowess. These particular kinds of anoles, scientists had assumed, were unique to Cuba. But here was another species, making its living in many of the same ways, on Hispaniola (Am Nat, 188:357-64, 2016). “This is an example of what might be a seventh ecomorph. . . . Evolution is more predictable than we have yet given it credit for,” says Johnson, who was not involved in the project.

“It’s amazing, in part, that anything new there could be found after all these years,” adds Losos, a coauthor on the study. “The age of discovery is not yet over.”