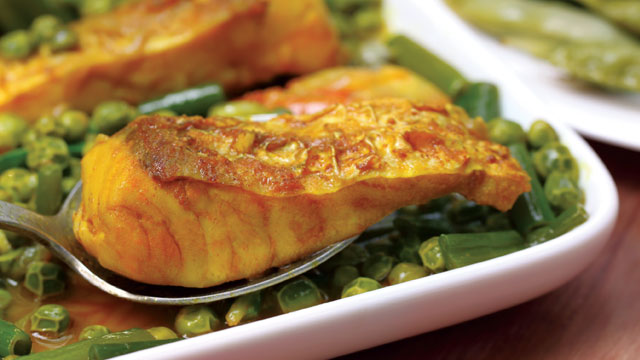 BON APPETIT: A filet of bighead carp, one of the Asian carp species that has invaded North American waterwaysSWAPAN PHOTOGRAPHY/SHUTTERSTOCK

Charlie and Rover skip back and forth across an aluminum boat idling in a lake connected to the Illinois River near Frederick, Illinois, on a chilly April morning. The father-and-son pair of chocolate labs howls with excitement as Clint Carter, a big, affable guy who runs Carter’s Fish Market in Springfield, reaches overboard to grab part of a gill net he had set the night before. Arm over arm Carter drags in the net, and along with it, big, bloody, flopping carp. Twenty minutes later he’s finished hauling in two 200-yard-long nets and is standing knee deep in a 1,500-pound pile of fish. “If this were over the summer, it would be 10,000 pounds,” he says.

This stretch of the Illinois River—once commercially fished for catfish and a...

When we decide something is pretty good to eat, we run right through it.—­Jackson Landers, hunting educator

Others agree. “When we decide something is pretty good to eat, we run right through it,” says Jackson Landers, a hunting educator and author of Eating Aliens. “There’s definitely precedent for human beings deciding to hunt something down in a systematic way, especially if we apply industrial harvesting methods.”

The idea of eating invasive organisms has developed a bit of a cult following in the past few years. Joe Roman, a conservation biologist at the University of Vermont, edits the blog Eat the Invaders, which hosts recipes for introduced species, including wild boar, periwinkle snails, kudzu, and nutria.

Ecologist Andrew Deines developed a recipe blog with his fellow graduate students at the University of Notre Dame. Deines had been studying invasive tilapia in Zambia and got interested in the idea of eating invasives when he was doing fieldwork. “For many fisheries people, you may not be considered a real scientist until you’ve eaten your study organism,” says Deines, now a postdoc studying invasive species at Michigan State University. The group decided that a good way to raise awareness about the problem of invasive species would be to appeal to people’s culinary interests. The blog, Invasivore, now includes cooking instructions for bullfrog leg piccata, deep-fried earthworm, and garlic mustard frittata, among others. 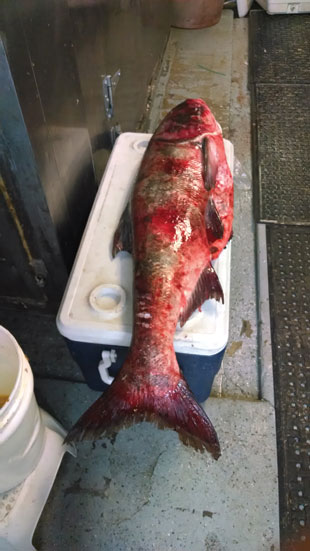 CATCH OF THE DAY: This 60-lb bighead carp (Hypophthalmichthys nobilis) was caught in the Mississippi River.COURTESY OF CLINT CARTERLike Roman, Deines sees his advocacy more as an effort in raising public awareness than as a vehicle for actually eradicating an invasive species. “What we can do is weird things on the Internet, you know, eat Chinese mystery snails—[so people] become more aware of invasive species,” Deines says. “By doing that we might be able to influence some policies or . . . actions people are doing in order to prevent invasive species from being introduced in the first place.”

There are scant data showing that targeted efforts encouraging the eating of an invasive species can actually reduce its populations, but a few anecdotal experiences do lend the idea credence. Roman was in Cuba with students recently, and after spending five days in the water, they saw only one lionfish. In contrast, any scuba diver in Florida would likely encounter swarms of the invasive fish around coral reefs. Roman points out that the Cuban government has promoted eating lionfish, and perhaps that explains the difference. Deines also notes that invasive Nile perch in Africa’s Lake Victoria eventually became a lucrative fishing industry, and populations of the fish began to crash after a couple of decades of intense harvesting.

“Before we get really excited, we have to start thinking about the economic side of this and the potential drawbacks,” Deines cautions. Setting up a market for a species makes it valuable, “and you create strong incentives to keep it around.”

Landers isn’t so worried that creating a market for an invasive species could backfire. He points to a classic economics theory, the tragedy of the commons, in which any shared resource with value will ultimately be depleted. “Any economist will tell you, when you have a public resource, as long as policy does not limit the take,” it will be depleted, he says.

The first step in fishmonger Carter’s evangelizing is to reverse the public’s aversion to eating Asian carp. A few carp processing plants have popped up in the Midwest, but the American palate has largely rejected the bony meat. Carter says that’s because nobody knows how to prepare it right, but he’ll fry it up for anyone who asks, and has done cooking demos for restaurants in Illinois. At his fish shack in Springfield, he deep-fries his catch of the day to convince me that invasive carp is actually good. Taking my first bite, I think of how few native species we pulled from those nets; of how invasive carp have ravaged rivers and lakes in the Midwest; of the devastation that could occur if they succeeded in getting to Lake Michigan. And that morsel of carp tastes all the sweeter.