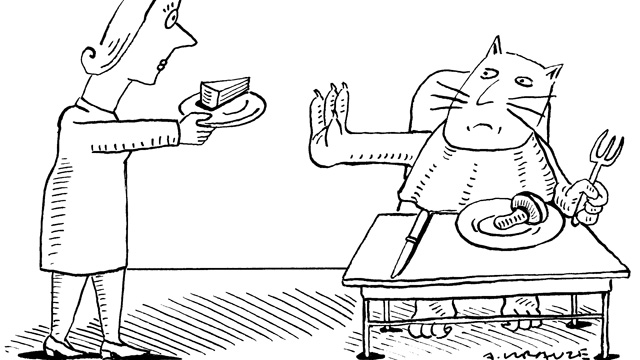 Several years ago, mycologist Ellen Jacobson was preparing a meal in her Colorado kitchen when her cat Cashew appeared, whining and brushing against her legs. She attempted to interpret her feline companion’s cries and guessed that he was begging for a taste of the porcini mushroom she was chopping. A sucker for a good meow, Jacobson obliged, tossing Cashew a few pieces, which he gobbled up, immediately meowing for more.

Jacobson soon discovered that Cashew’s gourmet tastes weren’t limited to boletes, but also included other expensive fungi, such as oyster mushrooms and morels. Her other cat, Lewis, also seemed to have a taste for mushrooms, as did many of the cats belonging to her friends and relatives. But what was it about these mushrooms that made cats crave them so? she wondered.

The answer, it turns out, is all in the taste buds, and specifically in the...

But cats are different, says behavioral biologist Gary Beauchamp of Monell Chemical Senses Center in Philadelphia. Thirty-five years ago, he recognized that the domestic cats he studied had no interest whatsoever in sweets. Curious to see if that was “an anomaly of domestication,” he and his colleagues headed over to the Philadelphia Zoo, where they conducted simple taste tests with a variety of wild felines, including lions, tigers, leopards, and jaguars. Beauchamp’s team replicated the same preference result they’d noticed in domestic cats: “there was no particular response to carbohydrate sugars or any other sweetener,” he recalls.

It wasn’t for another 30 years, however, that the molecular basis for those feline taste preferences came to light. In 2005, a few years after the T1R family of taste receptors had been identified, Beauchamp and his colleagues decided to take a closer look at the receptors in cats. What they found confirmed a suspicion Beauchamp had held ever since those studies on wild felines back in the 1970s: cats didn’t have a specific aversion to sweet flavors; they just couldn’t taste them at all. Sequencing the genes that coded for the T1R receptors, the researchers identified a 247-base-pair deletion in the feline T1R2 gene, which rendered the gene nonfunctional (PLoS Genet, 1(e3):0027-35, 2005). “I was delighted,” notes Beauchamp, who is now exploring the molecular makeup of such receptors in other carnivore species. “It was nice to see that there was a very dramatic explanation for our inability to find any response to sweeteners.”

And the results make sense given cats’ meat-rich diets, says University of Colorado School of Medicine otolaryngologist Sue Kinnamon, who studies taste transduction and the cellular basis of taste (see “Matters of Taste,” The Scientist, November/December 2011). “Because they are hunters, and they don’t actually see many sweet things in their diet, there’s just no selective pressure to maintain the sweet gene,” she says. “It’s just become a pseudogene.”

These taste preferences also explain Cashew’s love of mushrooms, adds cellular and developmental biologist Tom Finger, also of the University of Colorado School of Medicine, and coauthor with Kinnamon of “Matters of Taste.” Mushrooms, he explains, have relatively high glutamate levels, which activate the cat’s intact umami receptors. “[Cats] are not designed to like mushrooms; they’re designed to like protein [and amino acid] sources.”

But just because Cashew likes mushrooms doesn’t mean they’re good for him, warns Deb Zoran, a veterinary internist at Texas A&M University. Unlike omnivores, such as dogs or people, which can synthesize the fatty acids and amino acids their bodies need from other foods, such as plants, cats cannot, she explains. “Their bodies didn’t create those enzymes in order to convert those protein sources into the amino acids they need. They have to have them in their diet.”

“They are wonderful beasts, but they are very different [from other mammals],” Zoran adds. “A cat diet needs to be very high in meat-based protein.”