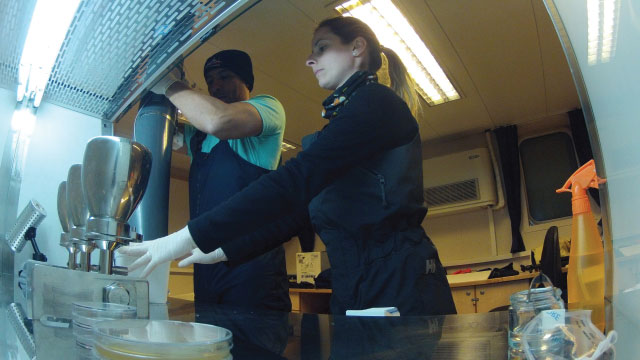 For the last 11 years, when austral summers arrive, microbiologist Luiz Rosa trades the sunny hills of Belo Horizonte, Brazil, for the cold plains of Antarctica. With its monotonous landscape, Antarctica might seem devoid of life, but despite the low temperatures, dry air, and extreme solar radiation, many microscopic organisms have learned to call this place home. For three months, Rosa, whose home lab is at the Federal University of Minas Gerais, and his team sample rocks, ice, and seawater in search of fungi. By studying them, the researchers hope not only to shed new light on their ecology and evolution, but also to find new candidates for drug discovery.

In their latest paper, published a few months...

One of the most abundant species Rosa and his colleagues observed was Penicillium chrysogenum, the globally common fungal species from which the antibiotic penicillin is derived. In fact, previous work from Rosa’s group noted that P. chrysogenum is also very abundant on the surface of rocks from Chile’s Atacama Desert, another extreme environment.

While P. chrysogenum had already been observed in Antarctica, other species were found there for the first time. For example, the team reported the presence of Rhodotorula slooffiae, a pigmented yeast species that is known to protect itself from UV radiation by producing a mycosporine—a type of compound often called “microbial sunscreen,” which has obvious biotechnological potential.

Rosa and his collaborators also noted the presence of Exophiala xenobiotica, a fungal species usually associated with polluted environments. While the introduction of pollution to Antarctica is a worrying trend, the polar region is also especially prone to disturbances wrought by other environmental changes. “Antarctica is an environment which is extremely sensitive to climate changes,” Rosa explains. “Thus, ancient microorganisms trapped on the Antarctic ice could be released due to global warming.”

Rosa points out that many unknown—and potentially noxious—microorganisms could be slumbering beneath Antarctic ice. As this ice melts and falls into the sea, deep ocean currents will likely transport the microbes for thousands of miles into new marine ecosystems. “These currents are the reason why sometimes penguins are found on the Brazilian coast,” Rosa says.

Itamar Melo, a microbiologist from the Brazilian public research institution Embrapa, was surprised to see Rosa’s team reporting land species in the seas ringing Antarctica. “Many of these fungi were mainly known in the terrestrial environment,” he says. “For example, Lecanicillium is a fungus that is often found parasitizing plant pests, and Acremonium is found in soils, where it degrades organic matter.”

Many of these fungi were mainly known in the terrestrial environment.—Itamar Melo, Embrapa

Melo says it is possible that these microorganisms were originally terrestrial inhabitants of continental Antarctica and were dragged into the sea along with melting continental ice masses. But it is also plausible that these fungal species normally live in marine environments, and are simply more ubiquitous than researchers had appreciated. Rosa says he wants to sample water along the route from Brazil to Antarctica in a future expedition, which will likely shed more light on this issue.

Most of Rosa’s work on Antarctic fungi had to be done in the field, using an onboard laboratory, as the ecological composition of seawater samples can be affected by freezing. The researchers collected samples using equipment that allows them to simultaneously measure different parameters, such as temperature and salinity. Then, in the sterile environment provided by laminar flow cabinets, they filtered the water samples and placed the filters in dishes with marine agar, a substance that mimics the marine environment. Once the fungi grew, the researchers extracted their DNA and sequenced some genomic regions to identify species.

In addition to answering basic science questions, Antarctic fungi may also possess commercial potential. For example, on a previous expedition Rosa’s team found species that demonstrated activity against neglected tropical diseases such as dengue fever and leishmaniasis. Identifying the molecules responsible for these effects could lead to the development of new drugs.

For Melo, though, the biggest potential of Antarctic species may lie in compounds that confer resistance to extreme conditions. “Many of these microorganisms synthesize essential fatty acids, such as omega-3 and omega-6, that protect their cell walls. Others produce exopolysaccharides, [large molecules made of sugars that are secreted into the environment] to protect them from hostile conditions, or antifreezing proteins,” says Melo. “Antarctica is a great place to prospect for these kinds of molecules.”