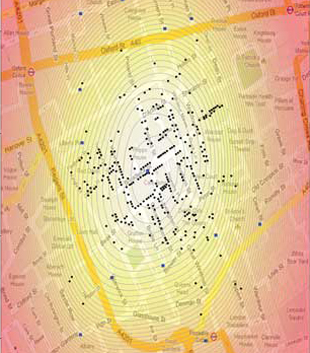 CHOLERA CARTOGRAPHY: Profiling the 1854 London cholera outbreak: black circles show addresses of victims, and blue squares, the neighborhood water pumps. The pump at the peak is the Broad Street pump, the source of the outbreak.
View full size JPG | PDFCOURTESY OF STEVE LE COMBERPeter Sutcliffe killed his first victim much as he would others: he struck the woman twice with a hammer, then stabbed her 15 times. Sutcliffe, who would come to be known as the Yorkshire Ripper, followed up that first gruesome murder in October 1975 with 12 more over the next 5 years. Local police gathered tips and interviews from terrorized citizens of the northern English county, and workers had to reinforce the floor of the station’s evidence room to bear the weight of the paperwork. But it wasn’t clever detective work or a sloppy crime that was Sutcliffe’s undoing—it was a driving...

Though the West Yorkshire police were criticized for their handling of the case, the advent of digital, searchable records would certainly have been an enormous help to pre-computer-era law enforcers. Moreover, a new criminal investigative method called geographic profiling could have cracked the 5-year-long case in a matter of hours.

“Sutcliffe’s name was on the top of the list,” says Steve Le Comber, of Queen Mary, University of London, recounting the results of plugging the Ripper data into the geographic profiling model. But Le Comber isn’t a criminologist or in the law enforcement business; he’s a biologist studying animal foraging behaviors, infectious disease, and invasive species.

Le Comber first read about geographic profiling in a magazine article and saw connections between the way it mapped a serial criminal’s activities and the foraging patterns of the three-spined stickleback fish he was studying. After contacting the mastermind behind the method, criminologist Kim Rossmo, now of the Texas State University–San Marcos, Le Comber set up a long-lasting collaboration and has adapted the model to retrace the movements of foraging fish and bats, to solve outbreaks of malaria and cholera, and to track the spread of invasive plants in the United Kingdom. “The evidence so far is that it will work quite well with almost anything,” Le Comber says.

Rossmo developed the method in the early 1990s while serving as an officer of the Vancouver Police Department and working on his doctoral degree in criminology at Simon Fraser University in nearby Burnaby, B.C. Among the key ideas behind the model is that crimes occur in linked locations. Most criminals aren’t going to commit a crime on their own doorstep—there’s a buffer zone—but they’re also not going to travel long distances to places they don’t know well, Le Comber explains. Thus, when you create a 3-D graph of where a suspected or known criminal is likely to commit a crime, it forms a volcano shape around the criminal’s home base.

Rossmo realized that he could flip the predictions, using the locations of crimes as the central point for the volcano-shaped probability graph to help determine where a criminal lived or worked. When there are multiple crimes or data points, Le Comber says, the volcanoes blend and “you end up with this bumpy mountain range.” The highest peaks represent the perpetrator’s most likely location.

During his graduate work, Rossmo tested the model out on solved criminal cases, first reidentifying the location of a serial arsonist. But the method got its public debut when it proved key to solving a serial-rape case that haunted the south side of Lafayette, Louisiana, from the early 1980s to 1995. Within a few days of working on the case, Rossmo used his method to narrow down the rapist’s location to half a square mile, leading police to Randy Comeaux, a former sheriff’s deputy, now known as the South Side Rapist.

Le Comber cold-called Rossmo about a possible biological collaboration, and Rossmo didn’t hesitate to say yes. In fact, he had independently considered that the model could be used in other fields. “Collaborating and doing a lot of different work in epidemiology and with invasive species—it’s all very exciting,” Rossmo says.

Like Rossmo, Le Comber and his graduate student Mark Stevenson first tested the model on already solved outbreaks, starting with the Broad Street cholera outbreak of 1854. In that famous incident, a single water pump in London’s Soho district was the source for a cholera epidemic that killed 616 people. Rossmo’s model passed the test by identifying the right pump.

Since then, Le Comber has been focusing on solving real infectious disease mysteries, including malaria outbreaks in Cairo, Egypt. Geographic profiling identified six of the seven water sources found to be breeding malaria-carrying mosquitoes by considering the locations of 139 malaria cases in 2005.

But, of course, the method can’t solve everything. If an area is saturated with a disease—such as is the case for Malawi, Africa, where malaria is endemic—the model won’t be able to pinpoint origins, Le Comber says. Moreover, the model may be most useful “in situations where things are very well reported, which is not often the case with tropical infectious diseases,” adds spatial epidemiologist Jane Messina of the University of Oxford, who works on modeling the spread of dengue virus, another mosquito-borne illness.

Le Comber’s graduate student, Stevenson, is even applying geographic profiling to track down and monitor invasive species. “We want to be able to have this running in real time as these things enter the country and we get more data,” he says. So if an invasive tree is planted and is spewing out pollen every season, for example, conservation biologists can track back to that first tree and stamp out the source, he explains.