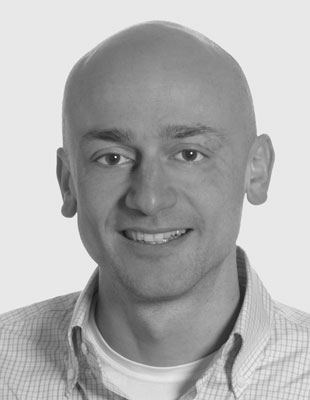 Cartilage is a firm, yet elastic, connective tissue that cushions joints and minimizes friction between bones. It is made up mostly of a matrix of collagen and proteoglycans and lacks nerve cells or blood vessels. In fact, cartilage contains only one cell type, the chondrocyte. A joint injury is often followed by progressive degeneration of cartilage, but there is hope that stem cells injected into damaged cartilage can help repair it. University Hospital Basel tissue engineer Ivan Martin discusses a recent study that sheds light on the mysterious process of cartilage regeneration by tracking labeled, implanted cells using a conventional MRI scanner (PLoS One, 6:e17001, 2011).

The Scientist: Why is it hard for cartilage to repair itself?

Ivan Martin: Cartilage is a tissue which is not vascularized, and, probably because of this, it has a limited intrinsic repair capacity. It’s a very durable tissue—in some people it can...

TS: What is the current approach to treating cartilage injury?

IM: The typical treatment includes the mobilization of local stem cells hoping that these will repair cartilage. This is the so-called microfracture technique. You can also transplant a piece of cartilage from a different area into the joints (called the mosaicplasty technique). There is a very promising, relatively new technique—the use of autologous cartilage cells, or chondrocytes, which are expanded ex vivo and injected into the defective area. Even more recently, people have considered using mesenchymal stem cells, which are the progenitors of chondrocytes.

TS: What is known about the behavior of these cells once they’re implanted?

IM: There are some theories that indicate that these cells could have a hit-and-go effect. So they could release certain factors, interact with the resident cells, instruct them, and then disappear. There are other theories that indicate that mesenchymal stem cells could effectively participate not only in assigning the regeneration but also in regenerating the tissue themselves. So they would remain there, become chondrocytes, and form new tissue.

TS: A recent PLoS One paper describes a system of labeling the progenitors of chondrocytes with superparamagnetic iron oxides and then tracking them using magnetic resonance imaging (MRI). Could this technique be applied in a clinical setting?

IM: We cannot just continue injecting cells and looking two years down the road to see if there is a change or not in the clinical results. We need to have control over the treatment we apply in order to understand the mechanisms of action and to be able to predict with better reproducibility the clinical outcome. This technique would possibly contribute or provide the technical means to address this important scientific question. It requires a relatively simple instrument, a 3 Tesla MRI scanner, which is generally available within a clinical center.

TS: Is there a concern that the label itself may interfere with the normal functioning of the implanted cells?

IM: This is a very preliminary study, but it’s a sound one which is done in a consistent way and which leads to the conclusion that there is no change in cellular function. There remain some other issues to be addressed before the technique is used safely and in a meaningful way. One is that the labeling will get diluted if the cells proliferate. So it may become undetectable after a certain time. The other is that if the cells die by a macrophage-mediated process, the superparamagnetic iron particles could be transferred to surrounding cells and this would clearly bias the readout in this system.

TS: Can these cell-based therapies treat cartilage damage from a single injury as well as longer-term damage from a degenerative disease such as osteoarthritis?

IM: The cellular therapy for cartilage repair has precise indications for the treatment of acute injuries in relatively young individuals, mostly sport injuries. The idea in these traumatic injuries is to use autologous cells to induce regeneration of the cartilage or even simply to delay the degeneration, so that the patient can get older before developing bad cartilage, and at that point maybe the joint could be replaced by an artificial prosthetic implant. What would be ideal is not only to prevent degeneration, but to reacquire some function if the degeneration is already ongoing—when osteoarthritis is already there. There is no preclinical data yet supporting the possibility of a cellular therapy for reversing osteoarthritis. It is something that several groups are working on and it probably requires specific conditions for treatment.

The Martin lab at University Hospital Basel is working on implanting preformed cartilage grafts in place of cell suspensions to treat cartilage damage.