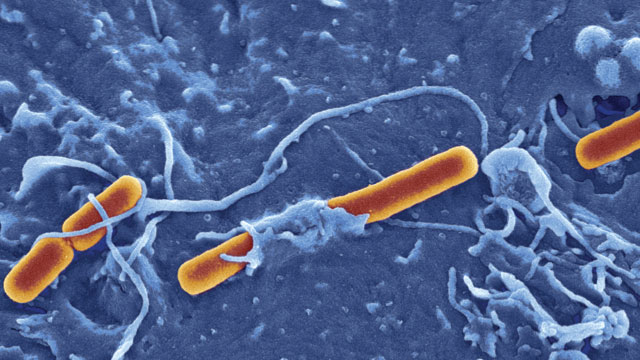 DYSENTERY: Many WWI soldiers succumbed to infections caused by Shigella bacteria, which cause illnesses that kill around 100,000 children per year in the developing world.DAVID GOULDING, GENOME RESEARCH LIMITED

In early 1915, less than a year into the First World War, Private Ernest Cable, a 28-year-old British soldier serving in the 2nd Battalion of the East Surrey Regiment, stumbled into No. 14 Stationary Hospital in Wimereux, France. He was suffering from severe abdominal cramping and bloody diarrhea. Doctors diagnosed him with dysentery. Not long after, Cable was dead.

Nicholas Thomson, a genomicist at the Wellcome Trust Sanger Institute, first came to know of Cable’s lethal infection at a conference in October 2011. At the meeting, he met a woman named Philippa “Pippa” Bracegirdle, who worked in the archives of the UK National Collection of Type Cultures (NCTC), the oldest collection of bacterial cultures in the world. Over a...

With the 100-year anniversary of the start of “the war to end all wars” coming up in just a few years, Thomson was inspired to take a closer look at the isolate. Having studied the genetics of Shigella and other pathogens, he decided to sequence the bacterium. But as Thomson learned more from Bracegirdle about the isolate, he realized he had a rare opportunity to find out more about the patient who died from it a century ago.

In contrast to most clinical isolates, which researchers typically anonymize before sharing with colleagues, the NCTC sample came with two juicy bits of information: the isolate, now known as NCTC1, was originally logged under the name “Cable,” and the medic who’d taken the sample was named Lieutenant William Broughton-Alcock. “It gave us a glint of hope that actually this story might be much more than a genomics story,” Thomson says. “It might have a real incredible personal story to it.”

The WWI genome suggests that Shigella has accelerated its accumulation of new genes over the last 100 years.—Kath­ryn Holt,
University of Melbourne

As luck would have it, Thomson’s postdoc Alison Mather had experience researching her own family’s military history, so she offered to track down information about Cable. The U.K.’s National Archives houses a collection of British Army medal index cards—records of the medals awarded to every soldier who fought in the war—but those only narrowed the search to some 300 WWI soldiers named Cable.

So Mather requested the military records for Broughton-Alcock. He had been a bacteriologist at No. 14 Stationary Hospital from late December 1914 to early May 1915. Then the real breakthrough came.

When Mather travelled to the National Archives in Surrey to examine the hospital’s war diary, she found an entry for the passing of Private Ernest Cable. It was dated 13 March 1915 and included information on Cable’s rank, regiment, and diagnosis. “It was the disease and the name we were looking for in the period of time when we knew that William Broughton-Alcock was working at the hospital,” Mather says.

Back in the lab, Thomson and colleagues were making progress on the isolate’s genome. Unfortunately, the sample had lost its plasmid through serial passage (a common challenge of long-term bacteria culturing). It was known from the published genomes of four more-modern strains that the Shigella flexneri plasmid carries many of the virulence factors that drive infection. But the group was able to generate a high-quality sequence of the bacterium’s chromosome, and having a Shigella genome from 100 years ago as a reference to compare with the published genomes of modern Shigella strains could provide unique clues about the pathogen’s recent evolution.

“The DNA inside the WWI Shigella isolate is like a time capsule,” says Kathryn Holt of the University of Melbourne, Australia, who was not involved in the work but has collaborated with Thomson.

Thomson’s team found that even in the Shigella isolate taken from Cable, the bacterium carried the genomic signature of resistance to some antibiotics, including penicillin, demonstrating that such resistance predated human use of the drugs. Of course, given the fact that antibacterial compounds evolved by fungi and bacteria have been around for a lot longer than humans have co-opted them, the finding is not all that surprising, says Thomson. “At some part of its life, in its ecology, [the Shigella strain that killed Cable] would have been exposed to penicillins naturally.”

The group also found evidence that modern Shigella flexneri has evolved greater resistance to some of the same antibiotics the Cable strain could fend off, and had acquired new resistance to a number of other antibiotics.

“The WWI genome suggests that Shigella has accelerated its accumulation of new genes over the last 100 years, gaining several new gene clusters, including some that allow it to tolerate modern antibiotics and various other compounds,” says Holt. “So our use of antibiotics and such has changed the evolutionary trajectory of the pathogen, forcing it to adapt in various ways.”

Thomson says that he and his collaborators were honored to be able to tell Cable’s story, in the context of a war that claimed millions of lives—on the battlefield and in infirmaries. “I think it’s high in the mind of most people that people die from wounds picked up during battle, but not very many people appreciate the fact that up until WWI, people died more of infection than they did from bullets,” Thomson says. WWI actually saw “a sea change in the way we managed infectious disease,” he adds. But dysentery and other diseases that spread through the trenches still killed millions.

“[We wanted] to commemorate all the soldiers who fought in the war,” Mather says, “[including] those who died from infectious disease.”