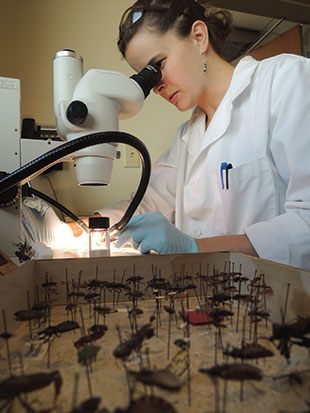 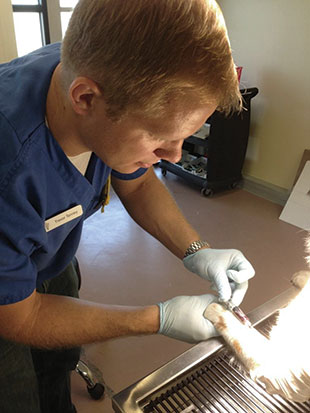 ONCE BITTEN: Trevor Tenney, a second-year veterinary medical student at Texas A&M University, samples a dog at a shelterJESSICA RODRIGUEZDogs infected with Trypanosoma cruzi—the parasite that causes Chagas disease—may not show symptoms for years until, one day, their hearts fail. T. cruzi can infect animals that ingest or are bitten by assassin or “kissing” bugs, a variety of insect species in subfamily Triatominae that are widespread in the Americas. Left undetected and untreated, Chagas can become chronic and fatal in canines. Some humans infected with Chagas face a similar fate. According to the US Centers for Disease Control and Prevention (CDC), as many as 8 million people worldwide have Chagas disease—and most of them don’t know it.

The disease and its vectors are endemic to South and Central America, but...

In the past eight years, veterinarian Roy Madigan of the Animal Hospital of Smithson Valley in Spring Branch, Texas, has treated more than 100 dogs for Chagas disease. Madigan jokingly recalls having snoozed through a vet school parasitology lecture on T. cruzi in 1999, “because it was presented as ‘This is a Mexico and South [America–based] disease,’ so my impression at the time was, ‘I’m never going to see this.’” Even today, he adds, animal Chagas is “an awareness issue” among the veterinary community; most doctors simply don’t look for it. “Veterinarians are surprised . . . when they find it.”

Sarah Hamer of Texas A&M University and her colleagues have been studying T. cruzi infections, among other vector-borne and zoonotic diseases, in dogs and other animals since 2012. “We have a very broad interest in . . . pathogens and parasites that can infect wildlife and domestic animals and are also infectious to humans,” says Hamer.

Last year, she and her colleagues sampled 205 dogs of various breeds and ages from seven shelters across Texas, screening the animals for a suite of vector-borne and zoonotic diseases, including Chagas. Testing pathogen and parasite exposures in shelter dogs could provide a proxy for human exposure in the same regions because those animals are more likely to encounter insect vectors than are pets in homes. “Many dogs at shelters show up as stray dogs or come from a background where they probably spent a lot of time outdoors,” Hamer says. “We thought going to the shelters would be good because it could provide a very sensitive signal of pathogen exposure on the landscape.”

Eighteen of the 205 shelter dogs (8.8 percent) were seropositive for T. cruzi antibodies.

We’re using shelter dogs—and dogs in general—as sort of an index of risk across the landscape.—Rachel Curtis-Robles,
Texas A&M Univer­sity

“Once a dog has an antibody titer—detectable antibodies in the blood—it has likely moved past the acute infection phase and into a latent or chronic phase of infection,” says Rachel Curtis-Robles, a PhD student in Hamer’s lab. But it’s not just shelter dogs that may be suffering in silence. “In any population of dogs that we look in, we do see disease—whether it’s shelter dogs, privately owned dogs, show dogs, breeding dogs, kennel programs, hunting dogs,” Curtis-Robles says. “All across the state there seems to be Chagas disease in a lot of these dogs. So it’s certainly not just shelter dogs, it just happened that this was a good network for us to work in.”

Although dogs with Chagas disease present very little threat to human health, Curtis-Robles, Hamer, and their colleagues proposed screening shelter dogs as a public-health tool. “Awareness of kissing bugs and Chagas disease risk among citizens and the medical community should be heightened in areas where seropositive dogs are detected,” the researchers wrote in an August Emerging Infectious Diseases paper (DOI: 10.3201/eid2008.131843).

“We’re using shelter dogs—and dogs in general—as sort of an index of risk across the landscape,” says Curtis-Robles. “This is a way that we can somewhat quickly assess the [Chagas disease] risk in certain areas across the state.”

Susan Montgomery, who leads an epidemiology team in the parasitic diseases branch of the CDC’s Center for Global Health, has investigated Chagas disease within the United States since 2007.

“Dogs do give us some indication of where transmission may be occurring,” says Montgomery, but “the link to human infection risk is really not clear.” And because of the nature of chronic parasitic infection, it’s difficult to know when transmission to either dog or human might have occurred.

Still, says Montgomery, “I’m really happy to see that there’s more attention to this disease in the United States, particularly in Texas, [where] we know there has been ongoing risk, and the amount of risk to people is still not clear.”

“More studies like this and more efforts to understand that risk are going to help us prevent the infection going forward,” she adds.