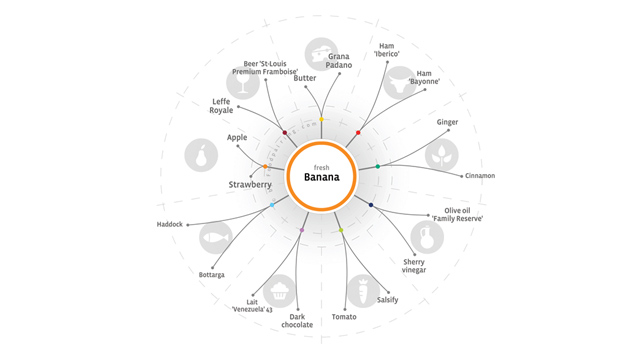 Iron Chef Masaharu Morimoto’s dish made from dark chocolate pasta bathed in a cream sauce that’s been spiked with parmesan cheese is one that may not whet everyone’s appetite. Chefs have long experimented with unusual food pairings, but now kitchen wizards have a new tool that can help them concoct even more daring culinary combinations. It’s based on research that purports to determine the compatibility of smells, which come from the volatile, or easily evaporating, compounds in food.

While the taste of food—the saltiness, sweetness, or sourness of it—contributes to the dining experience, it’s the odors that actually deliver most of the flavor, explains Marcia Levin Pelchat, a sensory psychologist at the Monell Chemical Senses Center in Philadelphia. “During normal eating movements, the tongue and palate push puffs...

To try to make sense of the how these smells are perceived when combined, chefs have turned to chemistry. In the 1990s, Heston Blumenthal, chef and founder of the three-Michelin-star restaurant The Fat Duck in England, sought scientific explanation for some unusual pairings, such as chocolate and caviar, that were surprisingly satisfying. With analytical help from chemists, Blumenthal found that the two foods shared key chemical components that could be traced using gas chromatography–mass spectrometry (GCMS). His work started something of a culinary craze in Europe. Not only chefs, but also mixologists like Tony Conigliaro of The Bar with No Name in London, would scour the scientific literature for GCMS data, trying to determine which unusual flavors might work well together. Because it was a lot of work, however, it wasn’t something he did regularly, Conigliaro says.

Enter the company Sense for Taste. To help chefs make sense of the manifold possible flavor combinations, bioengineer Bernard Lahousse collaborated with Michelin star chef Peter Coucquyt and sales director Johan Langenbick to launch Sense for Taste in 2009. They developed software that combined GCMS data on the chemical composition of different food odorants and crunched them through a proprietary algorithm to generate an easy-to-read diagram or hierarchy called the “food tree.” Entering a food into the software yields the best pairings with another food in each of nine categories that include dairy, meat, fish, fruit, beverage, and pastry. According to the software—available at foodpairing.com—banana can be combined well with butter or Gruyere cheese in the dairy category, Iberico ham in the meat category, and, unsurprisingly, strawberries in the fruit category. According to their website, more than 1 million chefs, food enthusiasts, and bartenders around the world use the program. Sense for Taste’s food-pairing software “basically took all of the work out of it,” says Conigliaro. 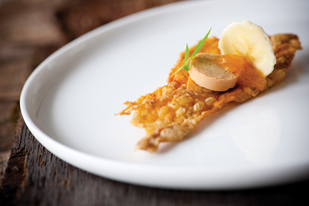 WINNING COMBO: Chicken skin, banana, passion fruit, and foie gras­—one of the many bizarre food pairings suggested using modern science© FOODPAIRING.COM, 2012But not everyone is convinced of the validity of pairing foods based on chromatograph readouts. For one thing, GCMS data, which Sense for Taste uses to create its food trees, reveals the relative abundance of each volatile, with higher peaks indicating greater concentration. However, matching foods by these peaks may not make a lot of sense, says Pelchat, as “low peaks can be very obvious to human observers,” whereas compounds that register higher peaks may not make up a significant part of a food’s perceived flavor. Lahousse says that the company adjusts for some of these preferences, but just how they manipulate the readouts to match foods is proprietary information.

In addition, very little is understood on the molecular level about how the 400 receptor gene products combine to represent the smell of a compound, says researcher Joel Mainland, also at the Monell Chemical Senses Center. Numerous receptors may be stimulated by a particular compound, making it difficult to understand how one odorant, much less any combination of odorants, is perceived by the brain. Also, subtle differences in genetic sequence for these receptors mean that up to “a third of the olfactory receptors are different between any two individuals,” says Mainland. Simply put, “the nose does not do what a GCMS does.”

Cooks less experienced than Heston Blumenthal have also given the food-pairing software a try. On his Khymos blog, organometallic chemist Martin Lersch started an online event in 2007 called “They Go Really Well Together,” or TGRWT, for which food bloggers tested unusual pairings suggested by the Sense for Taste software. The first combination—garlic, coffee, and chocolate—resulted in such creative dishes as roasted garlic dipped in melted chocolate with coffee beans, and mocha tofu mousse with roasted garlic.

Ultimately, the software may be more a tool for inspiration than for generating home-run combinations. There are many tools in the arsenals of chefs and mixologists, many sources of inspiration, says Conigliaro. But, he says, “some tools are more useful, and this is one of them.”