In the spring of 2015, doctoral student Victor Perez was working with high school students and casts of giant fish teeth. And not just any fish—it was the monster of the Miocene, Megalodon (Otodus megalodon).

During his time studying geology at the University of Florida, Perez had volunteered at a school in Tampa and another in Aptos, California, as part of a program that paired paleontologists with teachers. His job was to bring the scientific method into the classroom, and he had an extraordinary specimen to work with: a 3-D–printed cast of a nearly complete set of multiple Megalodon teeth from the same individual—what’s known as an associated dentition. The teeth themselves had been donated by private collector Gordon Hubbell to the Florida Museum of Natural History just that year.

For the Florida students, Perez had only a copy of the anterior part of the dentition, but by the time he got to the California classroom, he’d managed to get a copy of the whole set, anterior and posterior. “I would say there’s maybe a dozen known [such tooth sets] around the world for Megalodon,” says Perez, now the assistant curator of paleontology at the Calvert Marine Museum in Maryland. (Larger fossils or complete skeletons of extinct sharks are exceedingly rare because sharks’ skeletons are cartilage, more perishable than bone. So far, only teeth and the dense central part of vertebrae of Megalodon have been found.)

With a name aptly derived from “big tooth” in ancient Greek, this enormous shark terrorized the seas from about 20 million years ago until going extinct sometime between 2 and 4 million years ago. Using the teeth, and equations based on the proportions of living shark species, the students should be able to calculate the size of Megalodon, Perez figured—an exercise that would be not only entertaining but instructive about an important challenge in paleontology: estimating the size of an extinct animal from whatever bits you can find. 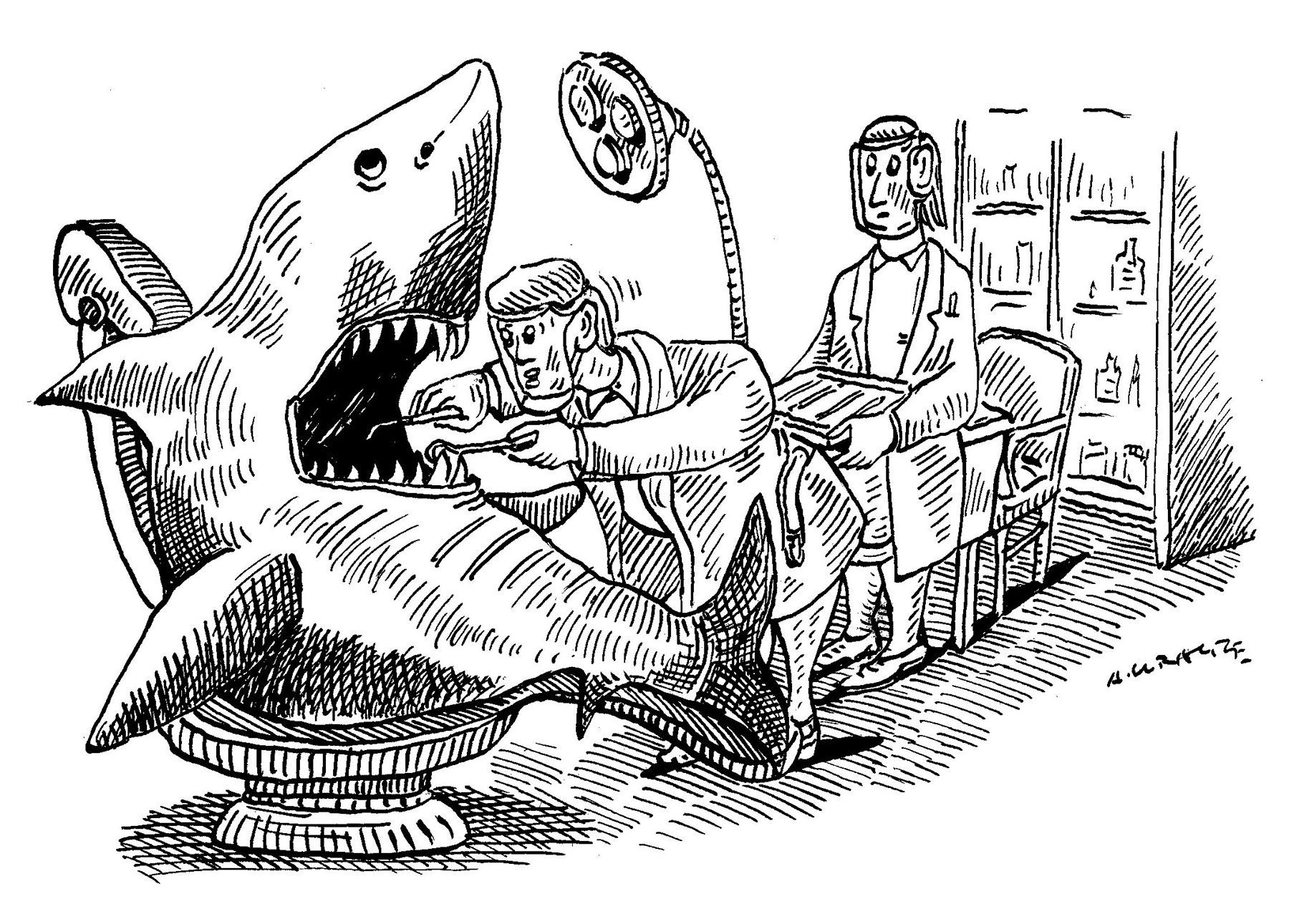 With the students, Perez relied on a method detailed in a 2002 paper by Kenshu Shimada relating the height of the tooth crowns (the part above the gums) to a fish’s body length. A paleobiology professor at DePaul University in Chicago and a research associate at the Sternberg Museum of Natural History in Kansas, Shimada had calculated that the particular Megalodon specimen he was studying would have been up to 15 meters in length. Longer sharks would be extremely rare, he concluded.

Perez’s exercise went swimmingly at first. The anterior teeth he had in Florida gave reasonable estimates of 12-meter animals. But when the California students looking at the whole dentition got to the back teeth, Megalodon had grown. Now the mega-fish was 45 meters long, almost twice the size of an average blue whale. “As we’re getting these different potential estimates, I’m trying to figure out if they used the wrong linear equation,” Perez recalls. “With the first section [of students in California], we didn’t quite figure out why. By the second, we figured out it wasn’t the students. It was the equations.”

This was surprising. Shimada’s method was widely accepted, Perez says, with many other paleontologists relying on it when analyzing fossils. He presented a paper on the students’ divergent findings at a conference in 2017. French avocational paleontologist Teddy Badaut saw the presentation and got in touch with an idea: Instead of tooth height, why not use width? 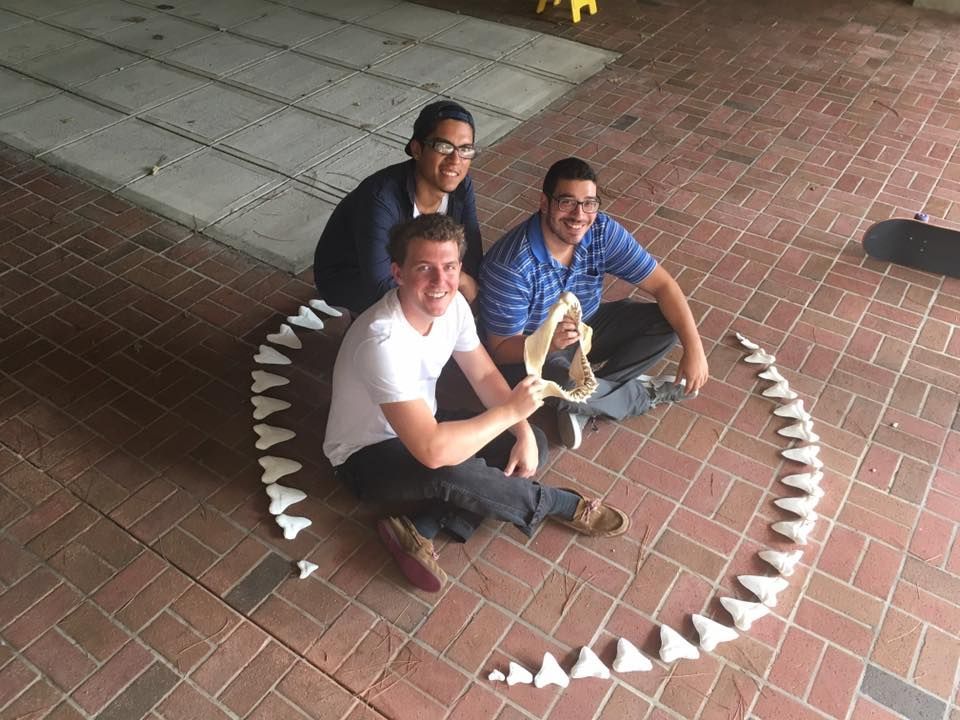 Badaut had gotten the idea from discussions with Western Australian Museum paleontologist Mikael Siversson, who has collaborated with Shimada on a couple of occasions. It was an idea Perez’s colleague Ronny Maik Leder of the Natural History Museum in Leipzig, Germany, had also previously considered. “I was finally able to convince Victor, who was initially very skeptical, that this work would be quite significant,” says Leder, who teamed up with Perez and Badaut on the project.

Megalodon’s best modern analog, says Perez, is the animal that might have helped drive it to extinction: the great white shark (Carcharodon carcharias). With 17 sets of teeth from great whites of known length, the team calculated the summed width of the tooth crowns for each animal, providing an estimate of the circumference of the animal’s jaw. They then calculated a ratio of summed crown width to body length for each great white and applied each ratio to their single largest Megalodon tooth—an 18-cm-tall, 13-cm-wide fang from South Carolina—to get 17 body-length estimates, then averaged them for their final prediction of the ancient beast’s size: as long as 20 meters, the largest estimate to date. 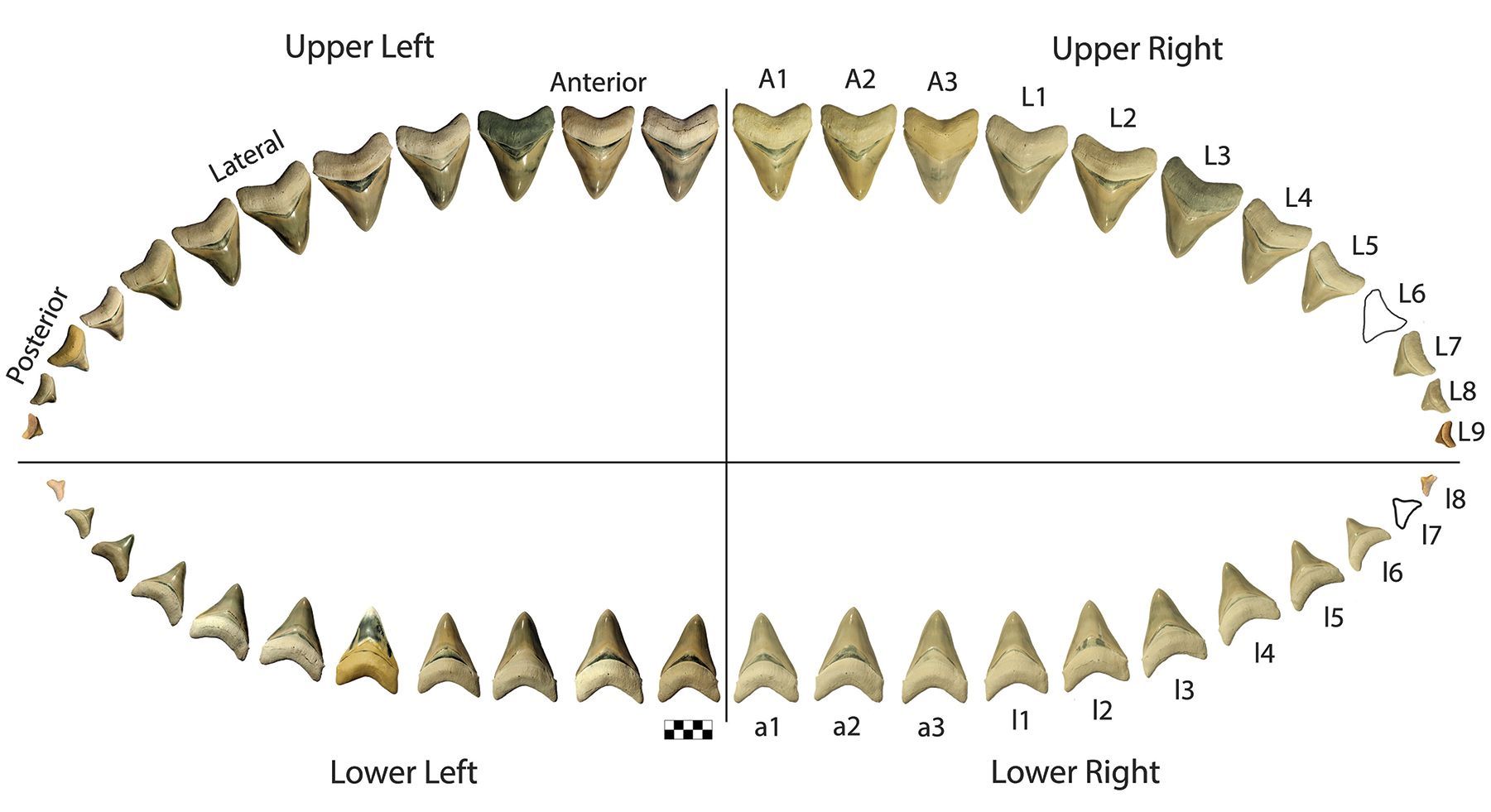 On reflection, it makes sense that tooth width should provide a more accurate estimate than tooth length, says Siversson. He points out that the largest tooth of a 2.5-meter-long grey nurse shark (Carcharias taurus), known in the US as a sand tiger shark, is only three-quarters the length of a tooth from a similarly sized longfin mako shark (Isurus paucus). But tooth width is constrained by jaw circumference. Providing you have enough teeth, “you’ll naturally come up with a close estimate of the size of the mouth” using tooth width, says Siversson, “which correlates closely to the size of the shark.”

“I was quite surprised that indeed no one had thought of this before us,” Leder says. “Obviously the simple beauty of this method was too obvious to be seen.” The approach does have limitations, though, in particular that it requires multiple teeth to produce accurate estimates, says Siversson. “We can only use it for those sharks where we do have more dentition, but that’s a quite small minority.” Another limitation in estimating jaw size is that some shark species’ teeth overlap, while others have gaps between them. 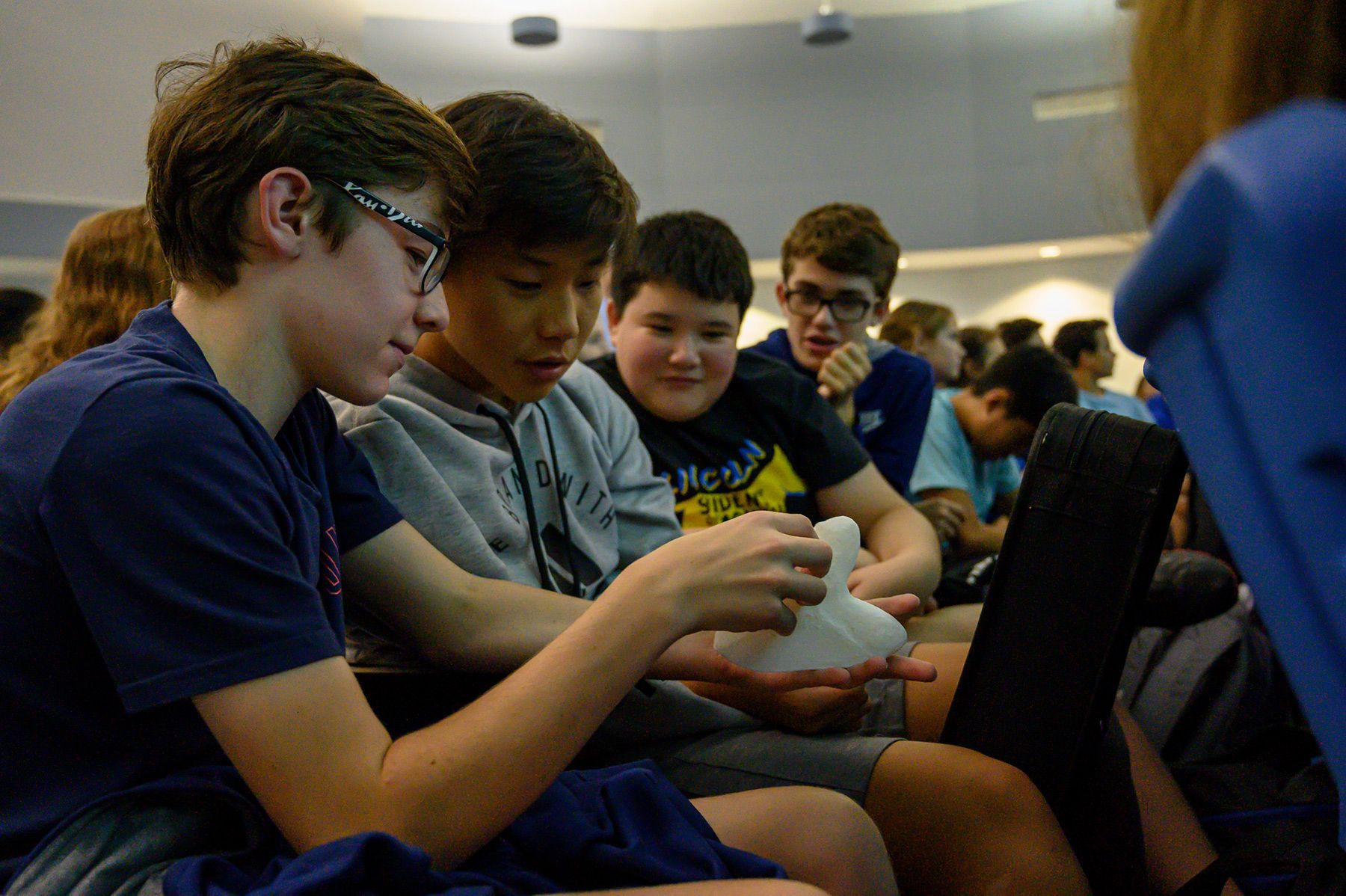 Shimada, who updated his approach in a 2019 paper, including switching from a linear to a nonlinear equation that narrowed the range of size estimates for Megalodon, notes that the new study doesn’t necessarily refute his results, adding that his work was based on different specimens. “Nevertheless,” he says, “the approach presented by Perez and others . . . is a welcome attempt that further supports that Megalodon is indeed a magnificent animal.” Shimada estimated in a 2021 study, based on growth bands in fossilized vertebrae, that newborn Megalodon were up to 2 meters long, already half the length of an average adult male great white shark.

If this sounds like a lot of effort spent on a fish-measuring contest, it is. But Megalodon is famous. “It’s on par with T. rex, I would say, in terms of popularity and attention,” Perez says. Enormity put Megalodon on the map, just as it did T. rex, and so getting the size right is an issue of public trust in science, he adds.

The size question continues to affect researchers’ understanding of the shark’s ecology as well. The current theories on Megalodon’s evolution, and why it went extinct, both rely on its size. One theory goes that Megalodon grew larger to prey on whales, but got so large that smaller sharks, still able to prey on whales but without the massive food requirements of Megalodon, outcompeted it. A paper published in September 2020, meanwhile, relied on a 16.5-meter estimate of Megalodon’s length to extrapolate the shark’s body proportions, such as the height of its fins, in an effort to better understand its physiology and why it went extinct.

While the new method could help scientists reevaluate other Megalodon specimens, the researchers who spoke with The Scientist agreed that the final test of just how big Megalodon really was would be finding complete skeletons, as rare as they must be, or at least more-complete jaws. For now, Perez says, Megalodon is an object lesson in how science works. “Science changes, and is constantly improving.” 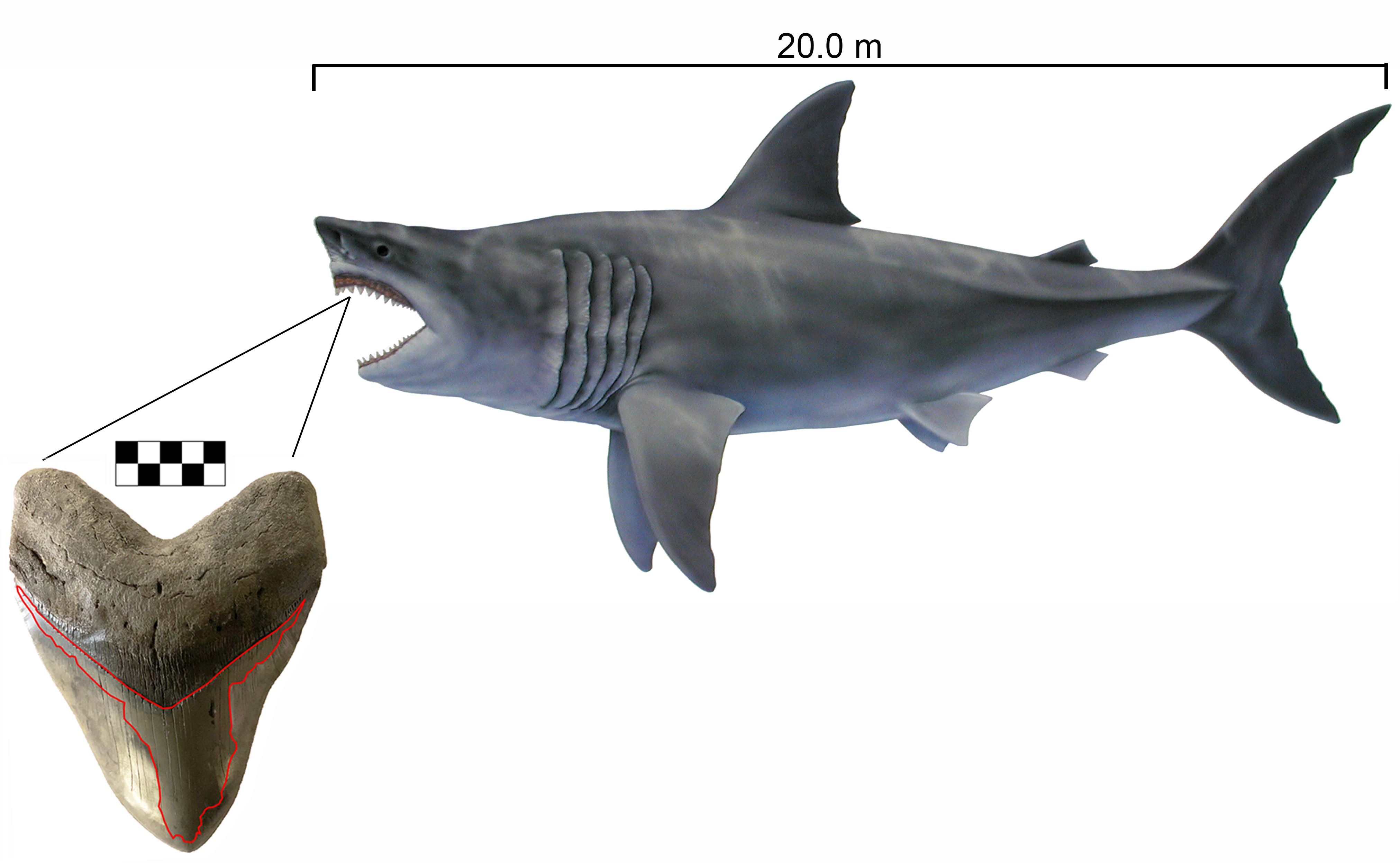