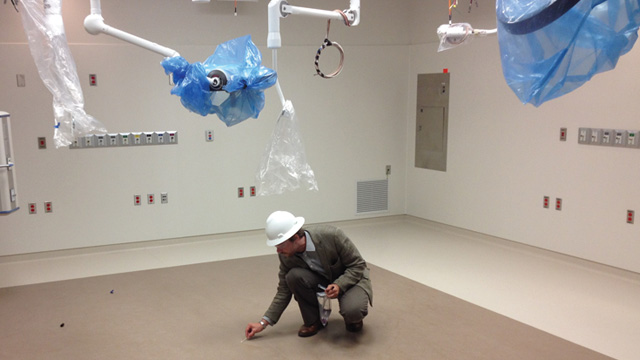 GOT ONE: Microbiologist Jack Gilbert samples microorganisms in a room of a new hospital prior to the building’s opening.COURTESY OF JACK GILBERT

Whenever human beings settle into a new house, vacation spot, or office, they aren’t unpacking alone; the menagerie of microbes that hitch rides on our bodies and belongings are busy making themselves at home, too. In less than a week, the members of our personal microbiome—sloughing off our skin by the millions—will nestle into bedroom carpets, kitchen corners, and central air ducts, elbowing their way among the already resident bacteria and viruses. And, for better or worse, these tiny tenants will inevitably influence our health.

Common as this scenario is, now imagine moving into a hospital, where microbial communities from medical staff and sick patients also reside.

“People expect not to get sick when they go into the hospital, but of course it happens—very regularly,” says Jack...

We want to see how the microbiome of this hospital environment develops.—­Jack Gilbert, University of Chicago

“We want to see how the microbiome of this hospital environment develops,” Gilbert says. In other words, how do a patient’s germs interact with hospital germs and spread to the bed rails, nurses’ stations, and air ducts of different wards? And how, in turn, does that affect the collections of germs on other people working or staying in the hospital?

Even healthy people carry around many disease-causing bugs, says microbial ecologist Rob Knight of the University of Colorado, who is collaborating on the project and has studied indoor microbiomes. Certainly there are complex interactions in the microbial milieu that determine where pathogenic microbes can survive and who gets sick, but “we don’t know the role that beneficial microbes play,” he adds.

This month, Gilbert and his team begin sampling bacteria and viruses—determining what kind and how many—in the University of Chicago’s new, currently unoccupied hospital, set to open January 31. They’ll start with a baseline read of microbial residents, which have undoubtedly trickled in through construction materials and water lines. The team will also swab the noses, hands, and clothes of doctors and nurses moving in next month, to see if their resident microbes are found in the hospital when it opens.

When patients arrive in February, the team will sample them, as well as patient rooms, nurses’ stations, and frequently touched surfaces, such as doorknobs and phones. They’ll collect samples daily for a year to understand the ebb and flow of microbial communities.

MICROBE DETECTORS: Researchers will use air samplers (left) and good old-fashioned swabbing to sample the hospital’s microbiome.PHOTO BY JESSICA GREEN; PHOTO BY ANGIE PONSO“If we can generate this data set, it opens up the black box of this hospital,” Gilbert says. But it won’t be easy. On top of the roughly 12,000 samples they’ll process each month—generating a predicted 300,000 microbial DNA sequences—they’ll have to rely on medical professionals, administrators, and even sick patients for help.

Medical staff will help explain the experiment to patients, Gilbert says, while patients—who will be either cancer patients that require long-term hospital stays, or surgery patients that require shorter stays—will volunteer to sample themselves. “We’ll ask them to swab themselves daily, their hands, their nose, and their inguinal fold (the area between the anus and genitals), which hopefully never really touches many of the surfaces,” Gilbert adds.

Despite the extra work, the hospital’s medical staff and administrators are eager to start. In fact, Gilbert has met with a lot of enthusiasm from the medical community. It’s amazing, he says, how passionate doctors and surgeons have become about understanding and preserving microbial diversity.

But, there are still many unknowns about the exchange between humans and microbes in our shared indoor worlds, says microbial ecologist Jessica Green, of the University of Oregon, who also studies indoor germs. “We know so little about the microbiome as a whole, it’s hard to even know if you’re measuring the right parameters,” she says. But Green hopes the year-long study will provide the first glimpses of such dynamics.

Though Gilbert and Knight are hesitant to make their own predictions about the movement patterns of microbes through the hospital, they do expect that bugs from long-term patients will become acclimated to their rooms, whereas rooms with shorter-term patients will be more susceptible to shifting populations—as they’ve seen in other indoor environments. Overall, they hope the data will lead to new cleaning and building strategies that could one day reduce harmful microbial communities. Moreover, the data could, as Gilbert says, inform the design of methods to promote healthy microbial communities that elbow out pathogens—a kind of probiotic supplement for your hospital room.