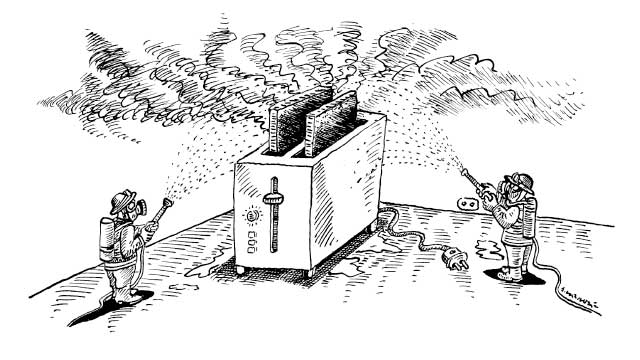 In 1997, construction workers digging an 8.7-km railway tunnel in Sweden began experiencing unusual symptoms: nausea, dizziness, and numbness in their fingers. Around the same time, people living near the dig site discovered paralyzed cows in adjacent pastures and dead fish floating in nearby pools. The cause of these mysterious ailments was a sealant called Rocha-Gil that the construction company had used to fill leaking cracks in the tunnel’s walls. The sealant had contaminated the surrounding ground and surface water with a toxic chemical—acrylamide.

Faced with a national environmental scandal, the construction company abruptly halted its work and called in a group of researchers, including analytical chemist Margareta Törnqvist of Stockholm University, to examine the effects of acrylamide exposure on tunnel workers. Her study revealed something unexpected: people in the control group, who had not been exposed to the tunnel’s toxic sealant, also had acrylamide in their...

At the time, acrylamide was primarily known as an industrial chemical, which earlier animal studies had revealed could cause a variety of cancers in rats at very high doses. Further investigations by Törnqvist and her colleagues revealed that acrylamide was also present in carbohydrate-rich foods that were prepared at high temperatures, such as chips, French fries, bread, and crackers (J Agric Food Chem, 50:4998-5006, 2002). Around the same time, Don Mottram, emeritus professor of chemistry at the University of Reading in the U.K., and his colleagues discovered that acrylamide was formed in the Maillard reaction, which browns and flavors certain foods, such as potatoes and bread (Nature, 419: 448-49, 2002).

The discovery that commonly consumed baked and fried products contained acrylamide, a known carcinogen in animals, prompted the Swedish National Food Administration to announce these findings to the public. “In Sweden, acrylamide was thought of as a poisonous compound that the tunnel workers were exposed to—there was so much written in the newspapers about that—then we found that acrylamide was in food and that [nearly] everyone was exposed,” Törnqvist recalls. “That was a challenging risk-communication task.”

Since 2002, various health authorities, including the US Food and Drug Administration and the European Food Safety Authority, have urged consumers to reduce the consumption of acrylamide-producing products. This January, the U.K.’s Food Standards Agency launched a “Go for Gold” campaign, urging consumers to avoid frying or baking starchy foods to a crisp. Despite campaigns like these, however, scientists have struggled to find consistent evidence that acrylamide does, in fact, cause cancer in humans.

“When the findings came out from the Swedish Food Administration, it definitely raised concern all over the world,” says Lorelei Mucci, an epidemiologist at the Harvard T.H. Chan School of Public Health who was then a research fellow at the Karolinska Institute in Stockholm. “Given the number of foods that contained acrylamide, we felt it was important to investigate whether eating the foods that contain acrylamide . . . was enough to cause different types of cancer.”

Mucci and her colleagues looked for links between acrylamide intake and a variety of cancers (including bowel, bladder, and breast) in Swedish populations and found no significant associations (Br J Cancer, 88:84-89, 2003; JAMA, 293:1322-27, 2005). Similarly, many other studies, including investigations of large cohorts containing tens of thousands of people, have failed to find a correlation between dietary acrylamide and an increased risk for a variety of cancers, with two exceptions: ovarian and endometrial malignancies.

In 2007, Janneke Hogervorst, who was then a postdoctoral student in epidemiology at Maastricht University in the Netherlands, and colleagues reported that within a large Dutch cohort of 62,573 women, acrylamide intake was associated with an increased risk for endometrial and ovarian cancers (Cancer Epidemiol Biomarkers Prev, 16:2304-13, 2007). Around this time, Mucci collaborated with Kathryn Wilson, who was then a doctoral student in epidemiology at Harvard, to investigate this question in US populations. In 2010, they reported that their analysis of the acrylamide intake of 88,672 women also revealed increased risks for endometrial cancer and for serous tumors, a specific type of ovarian cancer (Cancer Epidemiol Biomarkers Prev, 19:2503-15, 2010).

Many subsequent studies, however, failed to find an increased risk for these types of cancer. One of the reasons it’s been difficult to find consistent effects, says Hogervorst, is because “it’s not so easy to estimate acrylamide intake through questionnaires.”

Most of these early epidemiological studies relied on participants to complete surveys about the food that they had consumed. But these don’t always provide a completely accurate estimate of a person’s acrylamide intake, Hogervorst points out, because acrylamide content in food depends on the cooking process. In addition, she notes that some studies asked participants to indicate the amount of acrylamide-containing food they consumed, while others asked for frequency of consumption. Most studies have reported that the average daily intake of acrylamide through diet was less than 50 micrograms, which, according to Mucci, is on the order of 1,000 to 10,000 times lower than the levels tested in animal studies.

In a follow-up study, when Wilson and her team compared acrylamide levels in the blood of 263 women with ovarian cancer to control subjects from the same study cohorts, the increased risk for ovarian cancer they initially discovered disappeared (Cancer Epidemiol Biomarkers Prev, 22:653-60, 2013). “There are a lot of problems with trying to measure acrylamide intake with dietary questionnaires,” Wilson says. “So the fact that when you look at an actual biomarker of acrylamide exposure and you don’t see any [correlation with] ovarian cancer, I think kind of suggests that there really isn’t an association.”

Hogervorst thinks that more studies using biological markers are needed to confirm whether acrylamide really is carcinogenic in humans. Others, however, think it might be time to put the question of whether acrylamide causes cancer to rest. “When I review the literature, I take the findings from the epidemiology to suggest that dietary acrylamide does not increase the risk of cancer in humans,” Mucci says. “So I think that given limited public health dollars, maybe those dollars would have a bigger impact on reducing cancer in the population through other means than reducing acrylamide in food.”