Treating the microbial community residing on a painting with probiotics may offer a way to stave off biodegradation, a study suggests.

On the ceiling of the basilica of Santa Maria in Vado, a church in Ferrara, Italy, is a circular canvas nearly three meters in diameter. On it is a depiction of the Virgin Mary being crowned queen of heaven by God, Christ, and the Holy Spirit. Called Coronation of the Virgin, the painting is believed to be a masterwork of early Baroque artist Carlo Bononi and has hung on the church ceiling since the 1600s, where it remained until 2012. That year, an earthquake struck Ferrara, forcing conservators to remove the painting from the ceiling. It was then leaned against an interior wall of the church, and later returned to its rightful place after restoration.

Despite centuries on the ceiling and some time on the floor, the artwork didn’t show severe damage to its paint layers, with the exception of a network of cracks...

Thanks to their often degradable materials, artworks such as paintings are prime locations for microbial colonization, Sante Mazzacane, a researcher who studies chemical and microbial pollution at the University of Ferrara, tells The Scientist. In the past, art conservators and researchers have studied the effects of microbes on stone monuments, murals, and frescoes in order to better understand how to preserve them. But little work has been done to understand the microbial degradation of canvas paintings.

Artworks such as paintings are prime locations for microbial colo­nization.

Curious to know what was living on Coronation of the Virgin so he could properly restore it, Fabio Bevilacqua, a conservator in Bologna and Ferrara, teamed up with Mazzacane and Elisabetta Caselli, a microbiologist and medical geneticist also at the University of Ferrara, to identify the painting’s microscopic inhabitants. The team rubbed rayon swabs on regions of the front and back of the painting and took tiny patches of paper and cotton fibers from the back of it. They then put the samples on agar plates to culture the microbes growing there.

Using optical and scanning electron microscopy, the team identified the microbes as several species of Staphylococcus and Bacillus bacteria and Aspergillus, Penicillium, Cladosporium, and Alternaria fungi. The researchers found that Staphylococcus microbes hung out mostly on the front of the piece, while the Bacillus species inhabited the back of the painting. As for the fungi species, Aspergillus typically congregated in the darker colors of the work, the reds and browns, while Cladosporium hunkered down in the lighter colors, the yellows and pinks, and Alternaria lived on the part of the painting that had touched the church floor (PLOS ONE, doi: 10.1371/journal.pone.0207630, 2018).

“The more you know about a painting, the better equipped you are to understand what variables are affecting its deterioration and how to restore it,” says Bill Brown, chief conservator at the North Carolina Museum of Art in Raleigh, who was not involved in the study. He was especially interested in the authors’ suggestion of a possible relationship between fading in red layers of paint and certain species of Bacillus and Aspergillus—although he’s seen this sort of fading in other works, the damage isn’t usually connected with microbes. 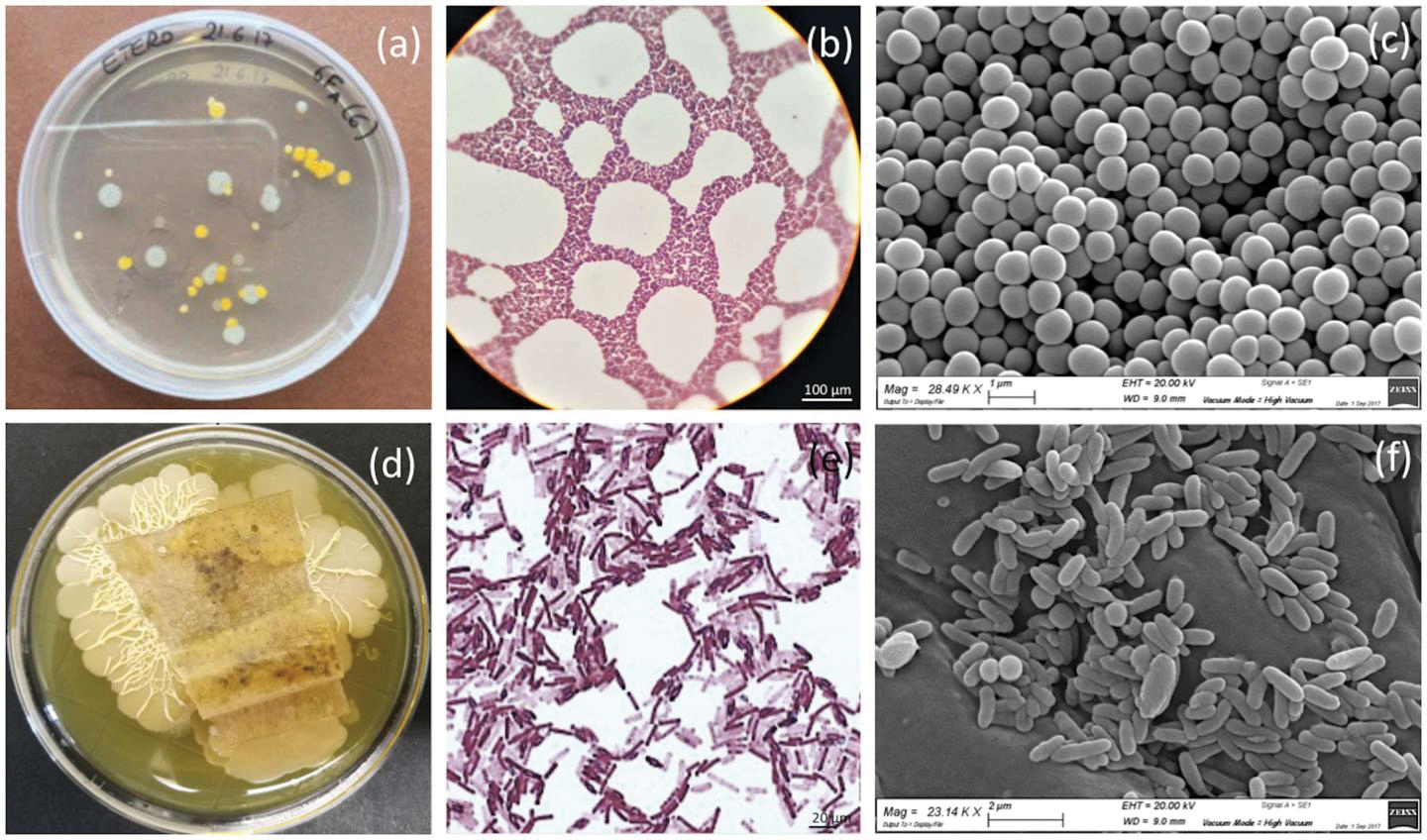 BONONI’S BACTERIA: The Italian artist’s Coronation of the Virgin (below) is teaming with microbes, according to a recent study. Researchers identified Staphylococcus species (above, a–c) on the painting’s front and Bacillus species (above, d–f) on its back.
Caselli et al., PLOS ONE, 13:e0207630, 2018 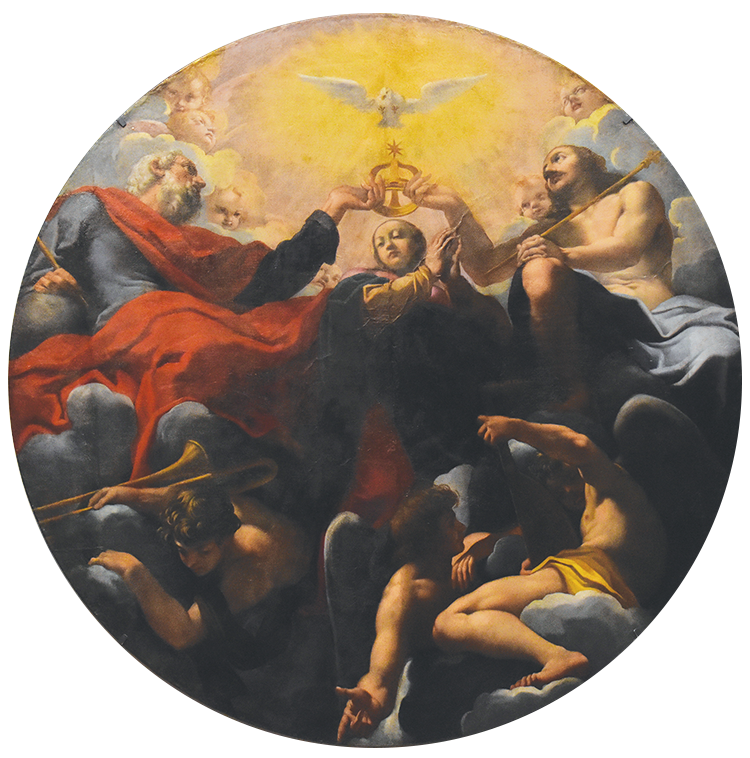 Understanding the microbiome of the piece did indeed help Bevilacqua determine what techniques he could use to decontaminate Coronation of the Virgin as he worked to restore it. One option was chemical biocides, which can wipe out all the microbes on an artwork. But this approach can open the painting up to infiltration by new microbial species—some of which may be even more damaging. So Caselli and Mazzacane looked for an alternative, drawing on some of their own research into the use of certain bacterial species as probiotics.

In work published since 2014, the researchers have shown that probiotics can prevent harmful bacteria from growing on surfaces in hospitals via competitive antagonism—where the probiotic uses up the nutrients that harmful bacteria need to survive. Using an experimental probiotic treatment on those surfaces led to a 52 percent decrease in hospital patient infections and a 75 percent decrease in antibiotic treatment costs, Mazzacane says. Maybe, he and his colleagues thought, the technique could be applied to the painting to get rid of the harmful microbes while preventing others from invading.

The researchers tested the idea in the lab. They ordered the bioactive product used in their hospital experiments from a local company, diluted the mixture in sterile water, then spread it on agar plates growing the microbial species found on the painting. The bioactive solution—comprising spores of Bacillus subtilis, B. pumilus, and B. megaterium—appeared to inhibit the growth of the painting’s microbes, though the team has not yet tried the microbial treatment on the painting itself, opting for a more traditional biocide treatment.

“It is extremely valuable to look for new and different ways to preserve art,” Tom Learner, head of the science division at the Getty Conservation Institute, who was not involved in the study, tells The Scientist. “I fully support exploring any novel approach like this.”

The results are preliminary, Mazzacane notes, but do suggest that some Bacillus bacteria could be used as a probiotic to prevent the growth of microbes that damage artwork. Of course, the team still needs to ensure that those Bacillus species don’t themselves cause damage. Treating masterworks with anything other than tried-and-true conservation methods isn’t easy to do in the art world, so fully checking the safety of any new treatment is important, Learner says. “There is a general reluctance by conservators to carry out any kind of treatment that requires an invasive procedure, such as this,” he says, “so the onus really is on the researchers to convince conservators that the treatment is safe, and hence one to consider.”