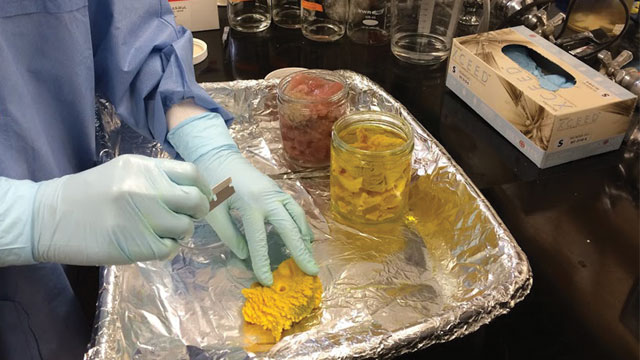 In bioengineer Seung-Wuk Lee’s native Korea, turkeys are often called seven-faced birds, a descriptive name stemming from their tendency to change the color of their neck and head depending on their mood. Normally red-faced, turkeys can become blue or even white as their excitement rises. Previous research had suggested that these colors resulted from light reflected off of the collagen structure that makes up the turkey’s skin, and Lee, a professor at the University of California, Berkeley, wanted to see for himself.

He called a local turkey farm in northern California and explained that he wanted to purchase 10 turkey heads. The farm generously donated 20. The disembodied heads arrived at Lee’s lab via overnight delivery, and his team immediately began peeling off the skin...

The collagen bundles use the same basic building block, [but] depending on how they organize, all these colors are produced.—­Seung-Wuk Lee,
University of California, Berkeley

Whether changes to these collagen structures modulate a turkey’s color remains a matter of debate. But the clear relationship between the size and shape of the collagen bundles and the skin’s color gave Lee an idea. What if he and his colleagues could re-create the collagen structure found in turkey skin, then engineer it to expand or shrink in response to particular stimuli? The result, he reasoned, would be a nanoscale sensor that could change color when a particular compound was present.

Collagen is composed of some 1,000 amino acids, making it very difficult to work with. So the researchers turned to a simpler solution: the M13 bacteriophage, which self-assembles into bundled nanofibers with a structure nearly identical to that of collagen—albeit one that is three times as large. Sure enough, the viral nanofibers swelled upon exposure to a variety of volatile organic compounds, such as methanol or hexane, causing a visible color change due to differential light scattering (Nature Communications, doi:10.1038/ncomms4043, 2014). Lee’s group is now working to build a database matching color changes to the specific chemicals that cause them.

The phage nanofibers used by Lee and his colleagues form a structure that, like the collagen bundles in turkey skin, is quasiordered, meaning that while the distance between the individual building blocks is highly predictable, it’s not truly periodic. That is, you could never copy one section of the material and get it to overlap perfectly with another section, as you could with a perfectly repeating pattern. As a result, the angle of viewing doesn’t affect the color that is reflected, as is the case with crystalline structures, such as that of an opal. “That’s the heart of the bioinspiration here,” says evolutionary ornithologist Richard Prum of Yale University.

Quasiordered nanostructures could also have the advantage of being easier to make than crystalline structures. “Photonic materials have properties based on their perfection,” Prum says. “A little flaw in a perfect thing will change the function radically, but these [quasiordered] materials are quite robust to that.”

Using phages has yet a further advantage: they are easy to genetically modify, allowing Lee and his colleagues to build nanofibers capable of binding specific compounds of interest. They generated a library of a billion different genes for viral surface proteins, then expressed them in phages that they subjected to a directed evolution process. By selecting for phages that bound to a desired target molecule, they “ended up with best-binding viruses within a couple of weeks,” Lee says. The winning phage can then infect a cultured E. coli cell, where it produces a billion identical copies of itself in less than five hours. “You can amplify trillions or zillions of these particles in overnight culture,” Lee says. Then, the artificial selection process can be repeated to generate phages with even greater affinity and specificity. 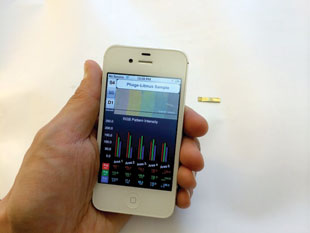 Nevertheless, the phage-based sensor pales in comparison to existing TNT detectors, notes Ned Thomas, a materials scientist at Rice University in Houston. Dogs, for example, can detect the explosive even when it’s at levels lower than one part per trillion, and some chemical detectors do even better.

But the one thing that Lee’s sensor has going for it is its specificity, Thomas adds. “Molecular binding in biology is so exquisite. The ability to detect things with biology, I think, is probably unsurpassed,” he says. “But . . . you want both—you want to be super specific, but you also want to be super sensitive.”