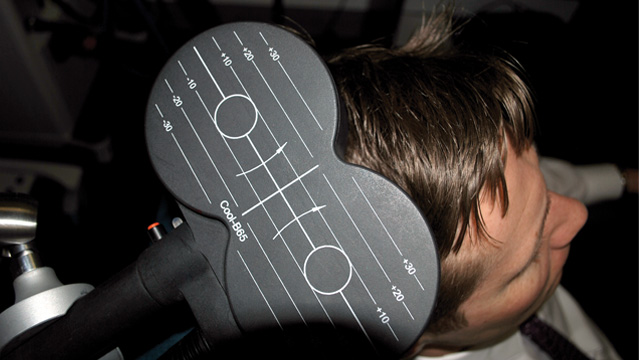 SCALP SENSOR: A study that delivered magnetic pulses to the scalps of children with autism and Asperger’s found differences in motor cortical inhibition.JEROME MALLER

Patients with Asperger’s syndrome (AS) display a distinctive suite of characteristics: high intelligence, high functioning, social impairments, and odd speech, movements, and interests. Earlier this year, after countless documented cases since the 1940s, Asperger’s disappeared as an official diagnosis, at least according to the latest version of the Diagnostic and Statistical Manual of Mental Disorders (DSM-5) used by clinicians. With the elimination of the label, researchers who have studied Asperger’s are now left in the lurch. “They’re trying to research a group that technically doesn’t exist anymore,” says Peter Enticott, an autism researcher at Monash University in Melbourne, Australia. “That’s a bit frustrating.”

Many in the Asperger’s community were not happy with the changes. Not only might people lose part of how they identify...

“The trouble with Asperger’s is everybody thinks they know it when they see it,” says Catherine Lord, a member of the DSM-5 Neurodevelopmental Disorders Committee and a psychologist at Weill Cornell Medical College in New York. “But what you may think is Asperger’s is not going to be the same thing as what I think is Asperger’s.” Lord and her colleagues evaluated the data on autism and Asperger’s, and decided the DSM-5 will lump people with certain behavioral traits that previously might have garnered them a diagnosis of Asperger’s, such as highly restricted interests or difficulty having a normal conversation, under the umbrella of autism spectrum disorders.

Duffy believes that the DSM-5 is a “very compulsively detailed” and “well-thought-out” document, and one that best represents the state of the science in the autism field. But he also suspects that Asperger’s exists as a unique disorder, with biological underpinnings distinct from those of autism. The challenge now for those who believe Asperger’s is a separate disorder is to prove it. “If they are different, then their physiology should be different,” Duffy says.

Currently there are no biomarkers to distinguish the conditions. Duffy and his colleagues set out to find the physiological correlates of each disorder using electroencephalogram (EEG) recordings. MRI studies favor higher-functioning children, Duffy says, because it’s difficult to get the more impaired kids to remain immobile during the scan, which can last for an hour. EEG is easier because the children only need to sit for as little as 8 minutes with electrodes on their scalp. In a recent study, Duffy’s group recorded brain activity from 430 children diagnosed with autism, 26 kids with Asperger’s, and 554 controls.

Among thousands of signals picked up by the EEG, the researchers identified 40 that could describe 50 percent of the variation among the children. Using these 40 signals, Duffy’s team was able to group the children accurately—autism, AS, or typical—about 90 percent of the time (BMC Medicine, 11:175, 2013). The children with autism and Asperger’s were more closely related to each other in their brain activity patterns than to the typical kids, but “these Asperger’s children carried a unique identity that we couldn’t find within the autistic group,” Duffy says. “They are either on the high-functioning tail of autism or, more likely, they’re different.”

The brain regions in which activity patterns differentiated the children with AS seemed to fit nicely with the stereotype of the condition. “Asperger’s children have higher levels of traditional language function, and they also show increased connectivities from left temporal areas [a region involved in understanding speech] to the rest of the brain,” Duffy says. The findings hint at the possibility that Asperger’s might exist as a distinct disorder, even if it’s no longer recognized clinically.

Enticott has also seen differences between children with high-functioning autism and those with Asperger’s in a study that used transcranial magnetic stimulation. The children with autism in that study showed reduced motor cortical inhibition, which typical kids and those with Asperger’s did not (Developmental Medicine & Child Neurology, 52:e179-83, 2010). Those findings suggested an explanation for the motor problems seen in autistic kids.

Enticott admits that Duffy’s findings don’t justify separating autism and Asperger’s into separate groups, but they “suggest there is a difference.” Richard Griffin, an autism researcher at Tufts University, says that Duffy’s study found a distinction between the two groups only because there were enough data to fish one out. “EEG and fMRI produce so much data that it would be statistically impossible not to find something (many things) significantly different between individuals or groups,” he says in an e-mail to The Scientist. Moreover, the study relies on clinicians’ judgments of the children’s conditions, which are not necessarily consistent from one assessor to the next.

Lord also points out that it wasn’t clear how the children classified as having Asperger’s and autism differed in categories such as IQ, language skills, or motor abilities. “It’s unfortunate, because it is a very interesting finding,” she says. “It seems likely to mean something, but we don’t know what the differences were between those two groups”

Griffin does believe that the DSM-5 should have kept AS as a distinct entity. “Not because there are clear behavioral or neurological differences (. . . clinicians fail to agree on the ‘right’ category all the time) but because many people have already been diagnosed with AS, often later in life, and it makes sense to them.”

Duffy agrees that there aren’t enough data yet to say if Asperger’s is a separate disorder that can be identified through biomarkers. The big hurdle will be getting sample sizes large enough to do a more definitive study, a task made all the harder now that no one is getting diagnosed with Asperger’s anymore.