Deciphering the communications of electric fish in their native streams is not for the faint of heart. “Once in a while, there is a thunderstorm ten kilometers away, then at some point the water level of those streams rises by one meter in one hour or so,” says Jan Benda, a computational neuroscientist at the University of Tübingen in Germany. “Then we are in big trouble with our equipment.”

Even in the absence of extreme weather, given the normal heat and humidity levels at his team’s research sites in Panama and Columbia, “things break and then you sit there in the field and try to solder a wire back to something late at night,” he says, laughing. “You’re dreaming about your nice lab where everything is so easy.” 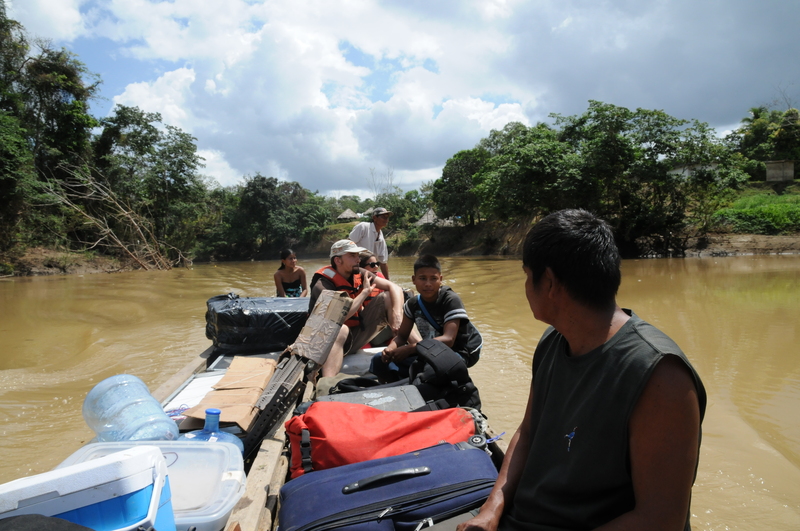 To reach the study...

Benda was driven from his comfortable lab a few years ago by a gaping hole in the body of scientific knowledge: weakly electric fish, which use electricity to communicate but not to stun prey, are popular subjects for neuroscientists who want to know how vertebrate brains process sensory information, but few if any researchers had ever eavesdropped on the animals zap-chatting in nature. Gaining this type of insight into the behavior of a species studied for decades in the lab is “a massively important undertaking,” says Malcolm MacIver, a neuroscientist and engineer researching animal behavior at Northwestern University in Illinois.

To record the fishes’ communication, Benda’s team had spent years devising grid-like arrays of electric signal sensors, with an amplifier to magnify the signals, to submerge into shallow streams. Studying the fishes’ chatter this way is particularly appealing for neuroscientists, Benda explains, because data on electrical pulses, or “chirps,” can be used to discern what sensory information a given fish receives, and how it responds. Not only can the researchers measure any electrical signals a responding fish gives off, they can also infer any position changes it makes—each fish uses a specific frequency, and its location can be triangulated if multiple sensors are used. 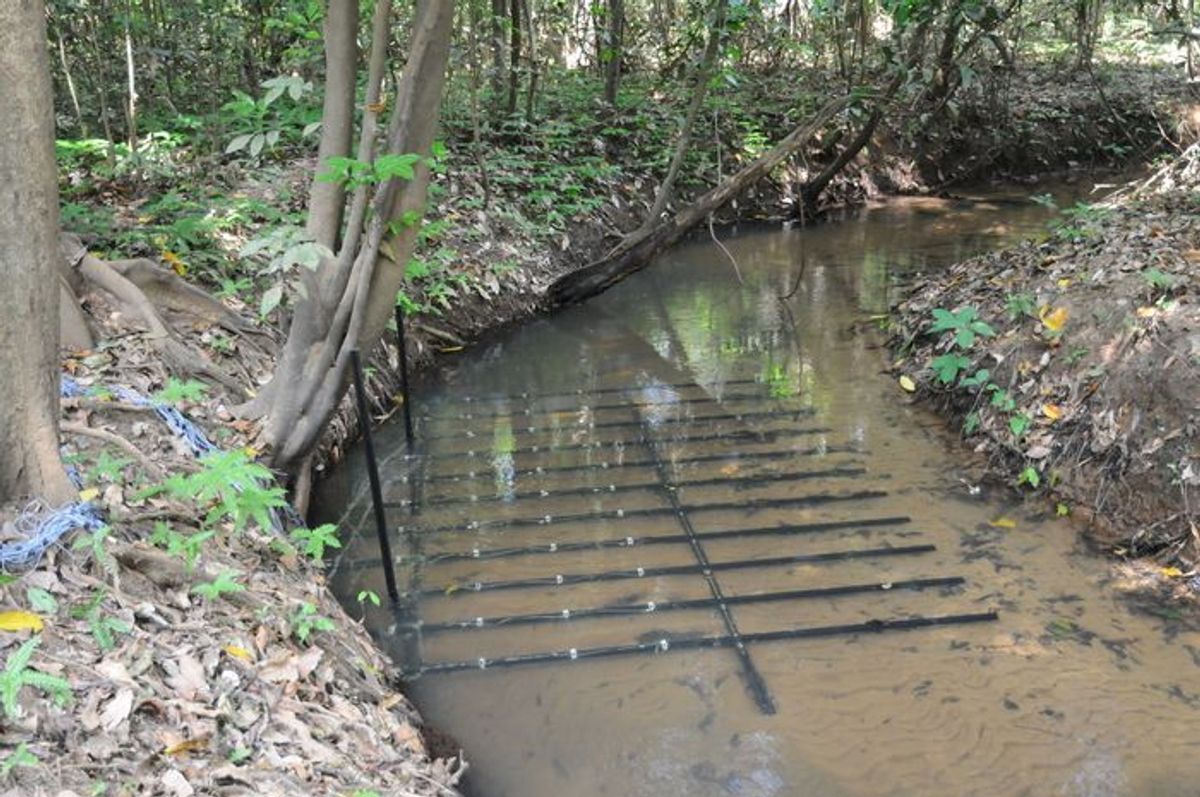 Researchers submerged a grid of sensors to eavesdrop on conversations between weakly electric fish.
JAN BENDA

It was a simple idea, but reeling in the data from jungle streams took some doing. “The Amazon is a real pain-in-the-butt place . . . to do research,” observes Eric Fortune, who studies the communications of songbirds and weakly electric fish at the New Jersey Institute of Technology and who has collaborated with one of the new paper’s authors, but was not involved in the current study. Fortune is intimately acquainted with the region’s difficulties, which can include fast-moving waters, hard-to-access sites, and unwelcoming human residents; he’s conducted a similar study of his own, not yet published, on a different fish species.

Once the logistical kinks were ironed out, Benda’s team crunched electrical signaling data collected in a short stretch of stream in Panama over several days. Their arrays had picked up the chatter of four different species, but the team homed in on the frequencies of just one, the gymnotiform knifefish (Apteronotus rostratus).

The researchers’ analysis, published this summer in The Journal of Neuroscience, turned up a few surprises. For one, males’ behavioral responses—such as attacking a nearby male, or modulating their own chirps in response to a female’s—revealed that the animals could detect extremely subtle signals from their neighbors. Between males, the team detected reactions to potential rivals that were more than 1.5 meters away, Benda says. “At this distance the electric field decays to such small amplitude . . . that this is the very lowest threshold where they can just perceive the signal at all.”  Lab studies by his group and others have shown that such “super-small signals do not really evoke very obvious responses in the neurons . . . the firing rate of the neurons does not change dramatically.” 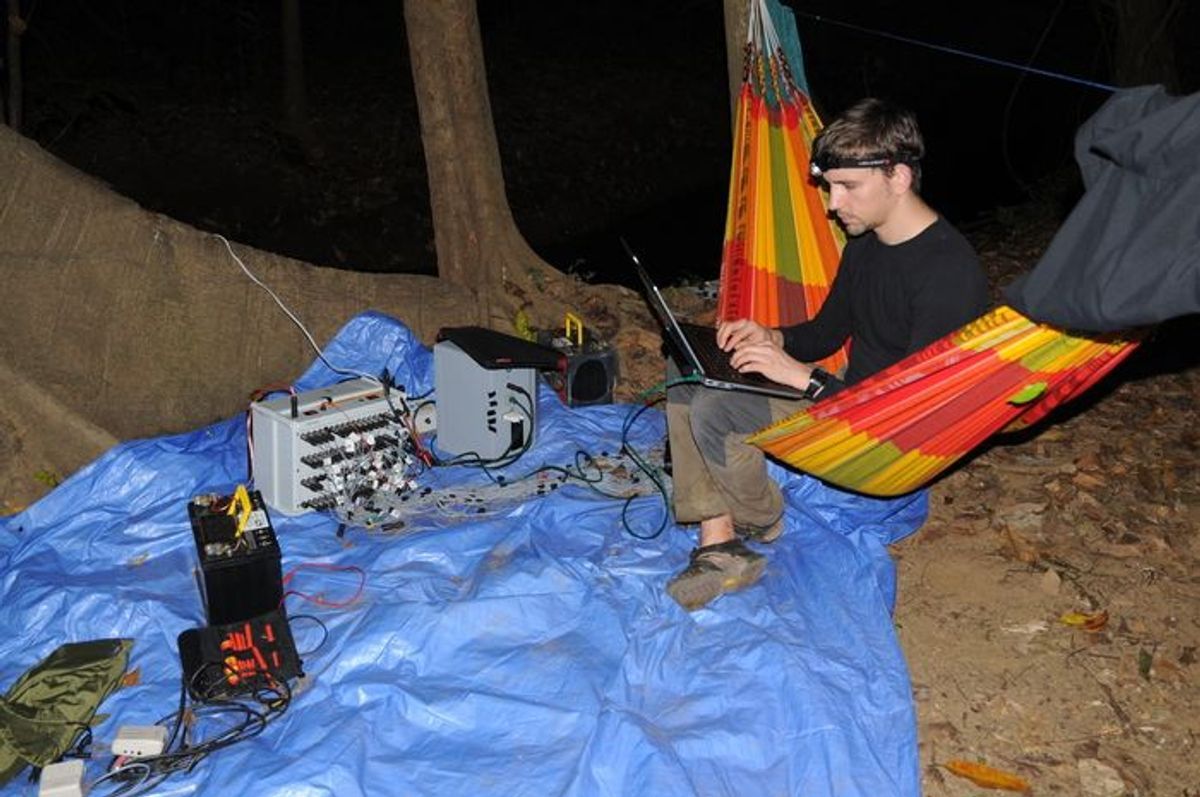 The rainforest is not the easiest place to run experiments with electrical equipment. At work in the forest here is study coauthor Joerg Henninger.
JAN BENDA

The fish also pick up similarly weak signals during courtship communications, the team found. While conversations between males and females tend to take place over smaller distances than those between rival males, courting fish sometimes “talk to each other in soft voices,” Benda says, deploying frequencies so high that they could have provoked only very small responses in the receivers’ neurons.

The fish’s regular use of signals at the limit of their own sensory systems was surprising to Benda. “There’s always the idea that the neural system is kind of optimally tuned to the task it needs to perform”—that neurons should respond strongly to those signals that are important to the animal’s survival and reproduction, he says. But “here we see something where this is not really the case. . . . There are other forces in evolution that drive your signals into regimes [that] the neural system is not optimally tuned to”—factors that may include sexual selection. The implication for sensory biology, he says, is that researchers should be aware of the niche in which their subjects evolved, and what types of signals they would be exposed to naturally.

In addition to their utility for neuroscientists, the newly developed listening arrays could help with ecosystem monitoring, Fortune says, by enabling estimates of electric fish populations without netting the animals.

MacIver, who reviewed Benda’s latest study for the Journal of Neuroscience, is also excited by the possibilities opened up by the listening arrays for better understanding electric fishes’ communications. “It’s fantastic to have, finally, some data,” he says. “This is a whole electric civilization that’s buzzing around in South America.”