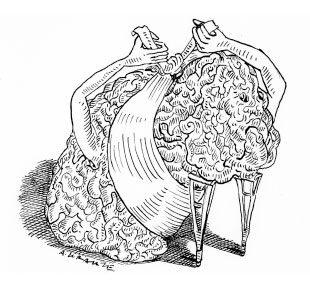 ANDRZEJ KRAUZEAs a psychiatrist at Western University in London, Ontario, Lena Palaniyappan regularly sees patients with schizophrenia, the chronic mental disorder that drastically affects how a person thinks, feels, and behaves. The disorder can be devastating, often involving hallucinations and delusions. But one thing Palaniyappan and other mental health professionals have noticed is that, unlike those with degenerative neurological disorders such as Alzheimer’s disease, Huntington’s, or Parkinson’s, sometimes schizophrenia patients eventually start to improve.

“In the clinic we do actually see patients with schizophrenia having a very relentless progress in early years,” Palaniyappan says. “But a lot of them do get better over the years, or they don’t progress as [quickly].” So far, most research has focused on the neurological decline associated with schizophrenia—typically involving a loss of brain tissue. Palaniyappan and his colleagues wondered whether there might be “something happening in the brain [that] helps them come...

To get at this question, he and his colleagues performed MRI scans to assess the cortical thickness of 98 schizophrenia patients at various stages of illness. Sure enough, the researchers noted that, while patients who were less than two years removed from their diagnosis had significantly thinner tissue than healthy controls, those patients who’d had the disease for longer tended to show less deviation in some brain regions, suggesting some sort of cortical amelioration (Psychol Med, doi:10.1017/S0033291716000994, 2016). “Some brain regions are regaining or normalizing while other brain regions continue to show deficits,” Palaniyappan says.

“We know very well now that the brain is plastic and changes over time, but we didn’t know if this could happen as a repairing mechanism or a compensatory mechanism in schizophrenia,” says Antonio Vita, a professor of psychiatry at the University of Brescia in Italy. “This is a strong suggestion that this could happen.”

Palaniyappan cautioned, however, that he and his colleagues were simply looking at a snapshot of schizophrenia patients and correlating cortical thickness with duration of illness. To better understand how the brain changes over time in this disease, it will be necessary to follow individual patients, taking multiple brain scans over the course of their illness, he says. Moreover, he adds, “the improvement in brain tissue in these patients does not directly relate to getting better in terms of symptoms. . . . If it is compensation, it’s not fully efficient.”

“It’s very preliminary,” agrees Georgia State University’s Jessica Turner, who was not involved in the research. “These guys were very careful in what they did, but until you do it again and again and again, it’s a little bit tricky.” And while 100 subjects used to be considered “a huge data set,” she says, with effect sizes as small as they are in schizophrenia, researchers need to look at thousands to “really get a sense what’s going on.”

Last year, Turner and her colleagues in the ENIGMA (Enhancing Neuro Imaging Genetics through Meta Analysis) group organized a study across 15 centers worldwide. Participating researchers used standardized methods to assess the subcortical brain structures of a total of 2,028 schizophrenia patients and 2,540 healthy controls (Mol Psychiatry, 21:547-53, 2016). And earlier this year at the annual meeting of the Society of Biological Psychiatry, Turner’s team presented results they’re now writing up on the cortical thickness and surface area of schizophrenia patients, using data from more than 30 centers in Australia, Korea, Japan, South Africa, Europe, and the U.S. “The goal is replicability,” says Turner. “Can we find consistent results that are not dependent on a particular data set or a particular subset of subjects?”

And for the most part, the answer is yes. Although the effect sizes from individual study sites are small—so small that most groups working independently probably would not have published their results, Turner says—collectively, the data tell a consistent story. “Almost all of them agree that almost all the brain regions are thinner in the cases than in the controls,” she says. But when the ENIGMA group looked for evidence that schizophrenia patients regain brain mass as their disease goes on, they didn’t find it, though the data do suggest that some areas of the brain begin to thin at a slower rate.

Palaniyappan is anxious to understand if the reparatory effect he and his colleagues observed is replicable, and if so, to study what factors might be contributing. All of Palaniyappan’s study subjects were on antipsychotics at the time of their MRI scans, he notes, so whether the same changes would have been seen without treatment remains unclear. “But we never used to think that the schizophrenic brain can recover,” he says. “[Our study] is an indication the brain is making some attempts, with help or without help.”