ABOVE: Marley, pictured here with her father, was diagnosed with the rare genetic condition Bachmann-Bupp syndrome a few years ago. TAYLOR BALLEK, SPECTRUM HEALTH BEAT

Kelly Berthoud remembers the day in 2019 when her daughter Marley sprouted her first eyebrows. Already four years old at the time, Marley had been hairless for most of her life, one of several characteristics about the young girl that scientists and physicians had spent years working to explain. But with the family ensconced in the living room on that morning just before Christmas, each tiny blonde hair, now growing as the result of an experimental drug Marley had recently started taking, was a gift. “We were sitting on the couch and the sunshine was hitting her just right,” Berthoud recalls. “I remember whipping my head around when I noticed.”

Marley had in fact been born with silver hair, but shortly after, it had fallen out in thick clumps. Her head was also unusually large, and a neonatal MRI revealed that sometime before her birth she had suffered a brain hemorrhage, leading to the formation of cysts in the organ’s white matter. As she grew, Marley started missing developmental milestones, including sitting up and learning to speak. The doctors  and her parents were at a loss. It would take a chance meeting between three scientists to jump-start her case, but once Marley’s team was assembled, it moved quickly. Within just two years, her symptoms would be diagnosed as a novel genetic disease, Bachmann-Bupp syndrome (BABS), and a promising therapy identified, representing one of the fastest turnaround times known for treating a rare disease.

Marley grew not only eyebrows, but eyelashes and a full head of sandy-blonde hair.

The path to this treatment began in 2016, when Marley’s doctors referred the family to one of the people the disease would eventually be named after, Caleb Bupp, a medical geneticist at the Helen DeVos Children’s Hospital and the healthcare organization Spectrum Health, both in Michigan. Initially, Berthoud and her husband, both nurses, grappled with whether to pursue genetic testing, a fear Bupp often encounters in his work. Unearthing an unexpected risk factor or mutation “has implications for privacy, for insurability, for all sorts of things that people worry about with genetics,” he says.

After the couple decided to go ahead, the doctors first checked Marley’s chromosomes for large duplications or deletions. Finding none, Bupp next turned to whole-exome sequencing, which scans all of the protein-coding regions in a genome. That analysis revealed two noteworthy findings—the first was a mutation that causes Smith-Lemli-Opitz syndrome, but Marley only had one copy of the disease-linked variant and the syndrome was recessive. The other mutation the team identified was in a gene called ornithine decarboxylase 1 (ODC1), which codes for an enzyme called ODC that is involved in catalyzing the production of certain biomolecules.

Running the ODC1 results through GeneMatcher, a database where clinicians share data on particular genes, revealed no known human diseases associated with Marley’s mutation. “It was the kind of result that goes back in the drawer,” Bupp says. But months later, Bupp attended a talk by Helen DeVos Children’s Hospital pediatrician Surender Rajasekaran and Michigan State University cancer biologist André Bachmann, during which the pair talked about their work with polyamines, molecular derivatives of amino acids that are involved in multiple cellular processes. “Polyamines are not very well known, even though they’re absolutely essential for so many things that the cell has to do,” says Tracy Murray Stewart, a polyamine research scientist at Johns Hopkins Medicine—including roles in cell growth, survival, and proliferation. “Nothing happens without polyamines.”

As it turns out, polyamine synthesis is mediated by ODC. Making the connection, Bupp struck up a collaboration with Bachmann and Rajasekaran to study a possible role for polyamines in Marley’s case. 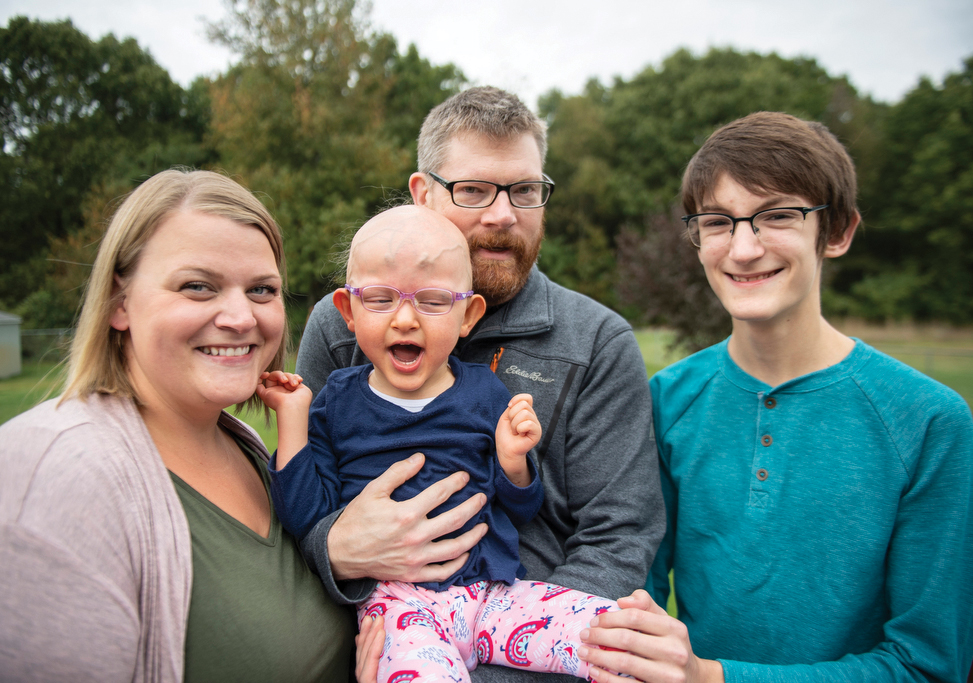 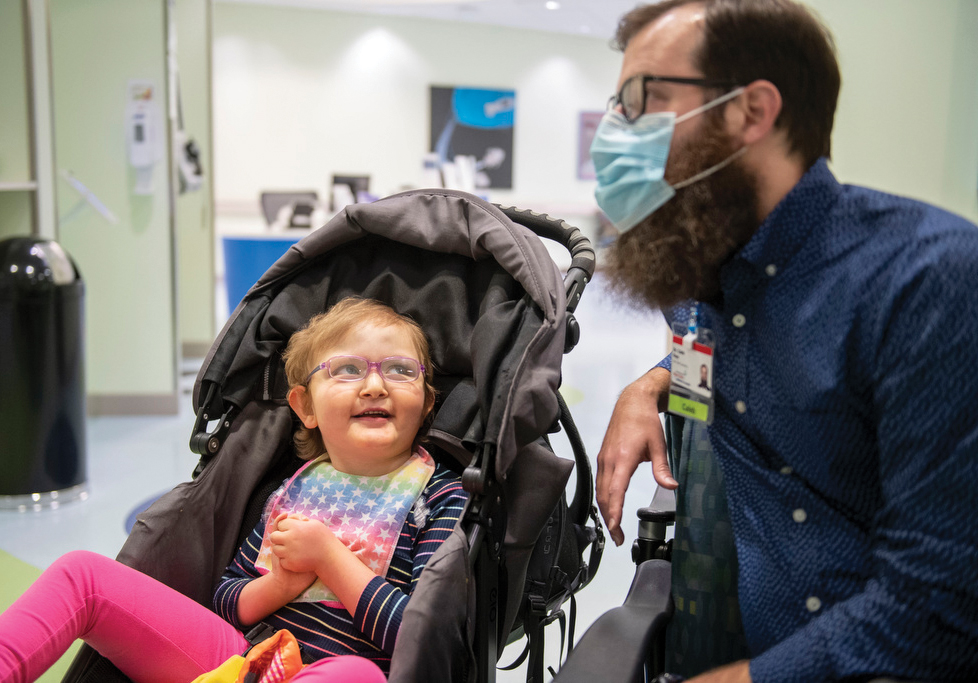 TURN AROUND: Marley, whose doctors identified a genetic mutation underlying her condition and repurposed a drug to treat it within just two years, with her family in 2018 (above) and with her physician Caleb Bupp in 2021 (below)
TAYLOR BALLEK, SPECTRUM HEALTH BEAT

Because of their importance in normal cell function, disruptions in polyamine synthesis often manifest early in life as cancer, which is how Bachmann and Rajasekaran first came to study them. Marley doesn’t have cancer, but her mutation, located on one end of ODC1, leads to a buildup of a truncated form of the enzyme that is much harder for the body to clear than the normal version, which is typically broken down in the cell within just 20 minutes of its production. “In Marley’s case, because that end of the protein is missing, the mechanism to clear it is jammed,” Bachmann says.

Shortly after meeting, the team published an early account of Marley’s disease and started brainstorming ways to treat it. Bachmann had one idea: an ODC-inhibiting drug called difluoromethylornithine (DFMO). Initially approved in 1990 to treat African sleeping sickness, DFMO had since shown promise in clinical trials for pediatric neuroblastoma and colon cancer, while preclinical evidence from a 1996 mouse model that coincidentally mimicked BABS—the mice also accumulated ODC and had a similar phenotype, including silver hair that quickly fell out—demonstrated that DFMO reversed many of their symptoms. To test the drug against Marley’s specific mutation, the researchers cultured some of the girl’s skin cells and found that DFMO reduced ODC activity.

Even with no guarantee of success, the Berthouds agreed to try DFMO, and Marley began taking the drug on a compassionate use basis when she was four years old. A month later, she sprouted the unexpected eyebrows. Having known Marley for most of her life, Bupp recalls the day he heard about it as “one of the best days of my life.”

Marley grew not only eyebrows, but eyelashes and a full head of sandy-blonde hair; the team documented these and other changes in a recent eLife publication. Within six months, she was able to sit up by herself, and today she’s able to scoot around and trade high fives with her brothers. Last winter, she tried sledding.

Post-treatment MRIs showed that myelination in the white matter of her brain had increased, signs that the drug, which she takes twice daily, might be spurring neurological improvements. The team also sent blood samples to a company called Metabolon that specializes in detecting biomarkers of rare diseases. Their tests, which involved comparing her samples to a reference cohort of almost 900 pediatric patients, confirmed that the drug normalized Marley’s levels of a well-studied polyamine called N-acetylputrescine, suggesting that her polyamine pathway had stabilized.

Within six months, she was able to sit up by herself, and today she’s able to scoot around and trade high fives with her brothers.

This quick turnaround—from diagnosis to administering a potential treatment in roughly 16 months—is “extraordinarily unusual,” says Anne Pariser, the director of the Office of Rare Diseases Research at the National Institutes of Health. “There’s really only a handful of cases like that.” She attributes the speed to the ready availability of an off-the-shelf drug that came with detailed dosage and safety assessments in children, as well as a preexisting animal model that had responded positively to the therapy. “In this case, they had a body of evidence that they could rely upon.”

Since Marley’s diagnosis, the number of documented BABS cases has risen to at least nine, including four described in a 2018 study. It’s still extremely infrequent, but according to Pariser, diagnoses of rare diseases tend to accumulate as evidence grows, and Bachmann also expects more to surface. “I’m sure in five or ten years, we’ll know of maybe forty or fifty,” he says. (He, Bupp, and Rajasekaran are named as coinventors on a patent application related to treating disorders caused by ODC1 mutations.) Researchers have already learned a lot from the nine cases so far, including the fact that each patient has a unique mutation, all of which affect polyamine synthesis in different ways. Shortly after Marley began treatment, a seven-year-old boy diagnosed with BABS started taking DFMO; Bupp says that his mother has told him that her son is “getting better every day.”

The success of the DFMO has spurred additional research into BABS and other rare diseases. Stewart of Johns Hopkins is using mice and patient cell lines to investigate DFMO as a treatment for Snyder-Robinson syndrome, another polyamine disorder. And Kwame Anyane-Yeboa, a geneticist at Columbia University Medical Center, is testing turmeric in an 18-year-old BABS patient. One of the spice’s ingredients, curcumin, has been reported to reduce ODC activity in certain cell lines, although there are no data about its effectiveness in people. “If we could treat this [condition] through diet, that would probably be easier for parents and other people to use,” Anyane-Yeboa tells The Scientist. He adds that while his patient has grown some hair since starting a dietary regimen of one teaspoon of turmeric per meal almost a year ago, “the question in our minds is whether the neurological part is reversible or not.”

For Marley’s part, she’s busy playing catch-up. On a video call with The Scientist in August, Marley, now six years old, sat on her mother’s lap, smiling and crying in equal measure. This, her mother says, is something the family is still adjusting to. Marley is now more than a year into her treatment—which will continue indefinitely. And while her quality of life has undoubtedly improved, the changes have also brought new behavioral problems. Even so, her daughter’s journey “is my favorite story in life,” Berthoud says. “There are so many patients out there with undiagnosed diseases that this doesn’t happen to, and when I look back at how quickly it happened, it’s absolutely amazing that everything lined up.”