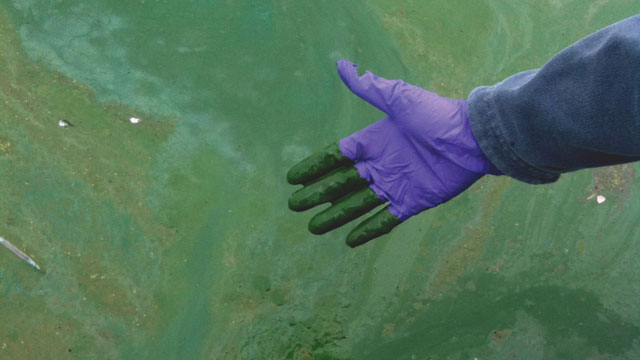 Annabelle’s family didn’t know it, but she was dying. Two hours earlier, she had ridden along in a canoe drifting through Middle Foy Lake near their Montana home. As the canoe neared the shore on this autumn day in 2010, Annabelle leapt from the vessel, as an excited Australian Shepherd is prone to do, and swam the rest of the way to the bank. Once ashore, she licked her wet fur—a casual reflex that almost spelled her undoing.

The lake water and her coat were tainted with microcystin, a liver toxin produced by some species of blue-green algae—or cyanobacteria—thriving in the water. Quick thinking, a Google search, and an experimental therapy would ultimately save Annabelle’s life, but her case spotlights a hidden danger that abounds in freshwater bodies throughout the country. One out of three US...

The blooms are sparked by a deluge of organic nutrients, such as those found in fertilizers, pouring into aquatic habitats. Recreational waterscapes near farms and residential lawns typically harbor such compounds, and climate change may be further driving cyanobacterial growth. And the problem is escalating. “There is widespread agreement within the scientific community that the incidence of cyanobacterial harmful algal blooms (HABs) is increasing both in the U.S. and worldwide,” says an EPA spokesperson in an e-mail.

Dogs often fall prey to such bacterial outbreaks, according to a recent study led by the Centers for Disease Control and Prevention (CDC). Their penchant for drinking stagnant water or diving headlong into contaminated ponds makes them susceptible to accidental poisoning. Nearly 100 dogs were killed by cyanobacterial toxins between 2002 and 2012, according to the CDC’s survey of veterinary hospital records, news reports, and state-agency archives dating back to the 1920s. “It’s really important that the CDC is showing an interest,” says toxicology expert Val Beasley, a professor emeritus of comparative biosciences at the University of Illinois at Urbana-Champaign. Yet the CDC study offers a mere glimpse into this burgeoning dilemma.

“A comprehensive review [of HABs] is impossible in this era because there isn’t mandated reporting,” says Beasley. For instance, the Harmful Algal Bloom–Related Illness Surveillance System (HABISS), a CDC database of reports on algal toxicity cases that served as another source of information for the CDC survey, was limited to just 13 states.

We are increasingly aware that many dogs and other pets are exposed to these toxins every year, and that the blooms are likely increasing.—­Raphael Kudela, University of California, Santa Cruz

Beasley argues that mandatory reporting and a centralized database are vital to management efforts, which can include interventions such as planting vegetation between water bodies and farms to sop up excess nutrient pollution.

“The cyanobacterial blooms are an alarm that is going off and will continue to go off until we start to manage the world more wisely,” says Beasley.

The algal toxin can affect humans as well. “Microcystin scares me a ton, especially because of the potential human health issues that are being missed,” says Melissa Miller, a veterinarian and wildlife pathologist with the California Department of Fish and Wildlife who coauthored the CDC report.

Kelly Rankin, Annabelle’s veterinarian, desperately needed a network like HABISS after the sick pooch was admitted to her clinic a couple of days after her exposure. “I couldn’t find any information beyond just routine supportive care for liver failure—I was scouring my veterinary literature and the Internet when I happened upon the San Francisco Chronicle article,” recounts Rankin. That newspaper story reported on a 2010 paper Miller published about microcystin poisoning in 21 California sea otters. This was the first report linking the death of a marine mammal to the freshwater toxin. Scientists had previously assumed that microcystin quickly broke down in saltwater.

As Annabelle lay dying, Rankin called Miller to ask if a treatment existed. Miller suggested cholestyramine, a drug that had allayed microcystin poisoning in rat studies, but had never been tested in canines. Cholestyramine was once a mainstay for the human treatment of elevated cholesterol, before the discovery of statins. It works in two ways. First, the drug enters the intestine and sequesters bile salts attached to microcystin. By binding the salts, cholestyramine ensures their excretion instead of their recirculation to the liver, where the toxin causes organ failure. Cholestyramine has also been shown to strongly bind microcystin, both in vitro and in the living rat intestine, which may protect the liver, kidneys, and colon from harmful inflammation and disease.

“I started [the drug] that day and literally by the next, the dog was on the mend,” Rankin says. The collaboration also helped establish Annabelle’s microcystin exposure, which was 4,000 times greater than the dose designated as “safe” by the World Health Organization. Together, Rankin, Miller, and other scientists published the details of Annabelle’s recovery with cholestyramine, so that veterinarians and the general public would be aware of this emerging toxin and its antidote (Toxins, 5, 1051-63, 2013).

“[Annabelle] ingested 1,000 micrograms of toxin. If [she] ate or drank the pond scum, that would be akin to the volume of a soda can,” says Raphael Kudela, a coauthor of Annabelle’s case study and phytoplankton ecologist at the University of California, Santa Cruz, who screened Annabelle’s fecal samples.

A fast, accurate test for cyanotoxins doesn’t exist, but one is desperately needed for comprehensive surveillance of contaminated lakes or for patients who visit veterinary and human emergency rooms, where cases may go overlooked. CDC budget cuts ended the HABISS program in 2012, so a national hub for case reports, which could aid prevention and treatment, is still lacking.

“We are increasingly aware that many dogs and other pets are exposed to these toxins every year, and that the blooms are likely increasing,” says Kudela. And new findings on the chronic impacts of cyanotoxin poisoning have him worried. “We know that even low-level exposure results in decreased reproduction in fish, and probably promotes cancer in mammals, such as dogs and humans.”