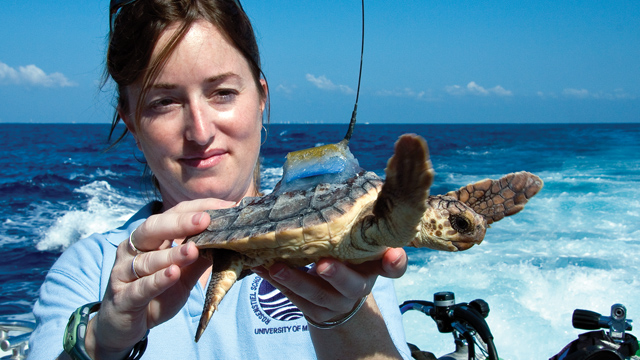 In 2007, sea turtle researchers Kate Mansfield of the US National Marine Fisheries Service and Jeanette Wyneken of Florida Atlantic University (FAU) were faced with a dilemma. They wanted to track loggerhead turtles during the oceanic phase of their lives, from the time they leave nesting beaches as hatchlings until they move back to near-shore habitats some years later—but such young animals were too small for the tagging devices used on adult turtles.

“It’s easy to glue a tag on some of the larger turtles, but the first couple of year age classes have been much too small,” Mansfield says. “So there’s this whole gap in our knowledge of what turtles are doing, how they’re behaving, what they’re eating, what part of the water column they’re...

Mansfield had recently learned of smaller tags used on birds that took advantage of solar energy technology to eliminate the large battery packs that power many satellite tagging devices. “Sea turtles are basically birds with flippers,” Wyneken noted. But attaching the tags to their small, semisoft shells was proving difficult. The duo had tested a variety of tactics on Wyneken’s lab-reared turtles at FAU, but nothing seemed to work. Affixed with the typical marine epoxy glues used for larger animals, the tags fell off within 2 to 3 weeks due to the young turtles’ fast growth. Velcro was similarly ineffective. An independent-study student in Wyneken’s lab who had started school as a fashion design major before switching over to biology at FAU designed various flexible neoprene harnesses, which worked, but all too well—they didn’t fall off as the turtles matured, and started to constrict the animals’ shells as they grew.

Then, while mulling over the problem one day in the lab, Mansfield noticed Wyneken’s beautifully manicured toenails, with blue waves carefully painted on. Wyneken also thought of her guitar-playing husband, who had acrylic nails applied to his own to help him pluck the strings. The researchers realized that turtle shells are composed of the same protein as human fingernails—keratin. Maybe the techniques the manicurist used could help them secure the tags to the young turtles. Wyneken stepped outside and called Marisol Marrero of Just Nails in Boynton Beach, who recommended they use the same acrylic base coat that she used on Wyneken’s husband’s nails. So the two researchers buffed shells and painted them with nail acrylic from the local pharmacy before gluing the tags in place.

The strategy worked. Previously, the longest time researchers had been able to track a young oceanic turtle in the wild was a few days, and the best tags Mansfield and Wyneken tested in the lab lasted just a few weeks. The new technique “extended the attachment period by 4 to 8 times,” Mansfield says—up to 2 months or more.

On top of the acrylic base coat, the team was using a surgical adhesive to secure the tags. Then another of Wyneken’s students, whose family owned a hair salon, recognized the odor. “One of my undergrads said to me, ‘That glue you’re using smells like what we use for hair extensions,’” Wyneken recalls. The student brought in a bottle of the stuff to the lab, and sure enough, the hair extension glue worked even better. “It’s the same chemical, but it polymerizes a little differently, so it remains a little stretchy,” Wyneken says. “Basically it accommodates, in people, the movement of the scalp, and in turtles, the growth.” 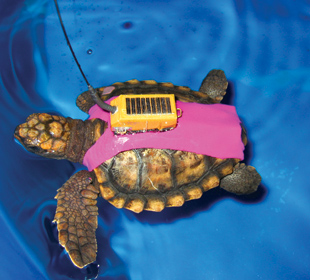 NICE BIKINI: Neoprene harnesses like this one fit turtles well, but rapidly became too tight on the growing animals.COURTESY OF KATE MANSFIELDIn 2009 the team released several tagged turtles, some as small as 11 centimeters long, into the Gulf Stream, and headed back to the lab to wait for the satellite data to start coming in.

“Considering that prior to this work almost all of the tracking data were limited to a couple of days [on turtles] from near-shore habitats, what we’re getting is pretty exciting,” Mansfield says. “We’re seeing the turtles moving thousands of kilometers in the Atlantic.”

The ability to track younger turtles for extended periods of time in the open ocean is promising for studying seasonal patterns of activity, migration routes, and other aspects of turtle behavior. “It’s going to allow you to investigate the spatial and temporal distribution patterns of a life-history stage that’s been relatively understudied,” says marine scientist Mike Arendt of the South Carolina Department of Natural Resources.

Mansfield and Wyneken couldn’t be more pleased with their salon-inspired technology. “It’s really worked out beautifully,” Wyneken says. “I’m reminded every time I get a manicure.”