A PhD student at Macquarie University, Pirotta had been searching for ways to monitor whale health using blow—“that visible plume of spray rising from a whale’s blowhole,” she tells The Scientist. Once considered just water, “it turns out [blow] is a juicy organic mixture of health information, which contains material such as DNA, hormones, and bacteria that we can collect to provide a checkup on a whale’s health.”

Getting close enough to healthy whales to collect this material manually is both dangerous for researchers and disruptive to the cetaceans. Collecting samples from stranded animals, meanwhile, biases researchers’ understanding toward whales that are likely to already be sick, Pirotta says.

But a collaboration with Alastair Smith, a senior drone technician and pilot at Sydney-based company Heliguy, offered another...

Last December, Pirotta and colleagues published a description of their approach, along with initial analyses of the microbiota resident in at least 48 whales’ respiratory tracts. This summer, they reported that an analysis of just 19 whale blow samples had turned up six new virus species, from five viral families.

These data, along with results collected in another snotbot project by researchers at the Woods Hole Oceanographic Institution in the Northern Atlantic and Pacific Oceans, are helping to provide critical new insight into whale biology. “People are starting to do this with other populations, which is great because we can compare what we find with their whales,” Pirotta says. “But we’re just starting to build that catalog of bacteria. . . . We’ve just scratched the surface of what can be done.”

A drone collects the spray from a humpback whale's blowhole.
VANESSA PIROTTA

Whale snot collection is just one of many ways that researchers in the biosciences are taking advantage of rapid advances in drone technology. Falling drone prices, extensions in battery life, and the miniaturization of sensors and imaging equipment are helping scientists to pose bold ecological questions and find answers that have previously been out of reach, or achievable only through drawn-out, expensive research.

“It’s almost limitless,” says Monash University ecologist Rohan Clarke. Especially in the field of spatial ecology, “drones with the right sensors give you the capacity to do just about anything we do already with traditional techniques. . . . In the past, you couldn’t even pretend you were going to go and collect data at the level of accuracy and precision we can now get.”

Drones’ earliest and most obvious successes have been in simply photographing animals or plants. In 2016, Clarke and colleagues reported that using drone-collected images to estimate numbers of nesting birds in tropical and polar environments offered more precision than expert observers on the ground—with the added advantages of being able to cross difficult terrain and creating a storable record of the data in the form of photographs.

A study published earlier this year by several of the same authors—this time using “colonies” of known numbers of plastic ducks on a beach in Adelaide—reported similar benefits: Counts made by citizen scientists using drone-collected images were between 43 percent and 96 percent more accurate than counts recorded by ground-based observers.

Drone image of a tern colony on an island off the coast of northwestern Australia
JARROD HODGSON & ROHAN CLARKE, MONASH UNIVERSITY

Drones’ capacity to take multiple, high-resolution aerial images can help researchers address more-nuanced ecological puzzles, too, as a University of New South Wales (UNSW) team recently demonstrated in a study of how humans have unwittingly influenced the physical landscape of Australia’s Strzelecki Desert.

Using off-the-shelf, camera-equipped UAVs, UNSW postdoc Mitch Lyons and colleagues collected overlapping images on either side of a 3,500-mile fence running across southeastern Australia. Constructed to keep dingoes (Canis dingo) out of what used to be farmland, the fence has been in place for more than a century, and has already been implicated in changes in vegetation: sand dunes on the dingo-free side of the fence are known to exhibit higher shrub density, thanks to changes in food webs brought about by the removal of the ecosystem’s top predator.

A drone captures footage of the landscape on either side of Australia's dingo fence in the Strzelecki Desert.
MITCHELL LYONS

But when the researchers computationally stitched together drone images of 12 dunes for a 3-D reconstruction back in the lab, they noticed something else. “Where shrub density is high, dunes tended to be taller and more ‘bumpy,’” Lyons writes in an email to The Scientist. “We suggested that the changes in shrub density alter the wind flow regimens and sediment dynamics, such that over time it has caused these changes in the dunes.”

These sorts of indirect biological effects on the physical landscape could potentially be widespread, Lyons adds. “Here it’s dingoes, but elsewhere it could be other predators, or how we manage grazing and livestock practices.”

Researchers are increasingly making use of UAVs to collect nonvisual data, too. European Commission agricultural engineer Pablo Zarco-Tejada and colleagues, for example, have been working with drones and small manned aircraft equipped with thermal and hyperspectral imaging devices to monitor the health of important crop plants.

One of their recent projects focused on southern Italy, where the pathogenic, insect-borne bacterium Xylella fastidiosa has been wreaking havoc on olive orchards. Although trees eventually display obvious symptoms such as leaf scorches and withered branches, the first few months of Xylella infection produce essentially no visual signs of disease, making it difficult for farmers to know which trees to cut down when.

“The risk is that before the symptoms are visual . . . those trees that are already infected can be the source of [further] spread,” Zarco-Tejada tells The Scientist. “The earlier we can identify trees that are infected, the better the possibility of preventing the spread.”

In the summers of 2016 and 2017, the team used small sensors—attached to a manned aircraft in the current study but easily applied to drones—to capture thermal and hyperspectral images of around 200,000 individual trees over more than 1,000 hectares, an area that would have taken months to survey on foot, Zarco-Tejeda says.

Comparing these data with direct analyses of plant tissue, the researchers found they could identify trees harboring Xylella remotely before visual symptoms appeared on the basis of subtle changes in color, fluorescence, and temperature due to bacterium-induced disruption to photosynthesis and transpiration.

The method had an accuracy of more than 80 percent, notes Zarco-Tejada, and is now to be trialed at almond groves in Spain and vineyards in Mallorca, which are suffering from infections by the same bacterium. 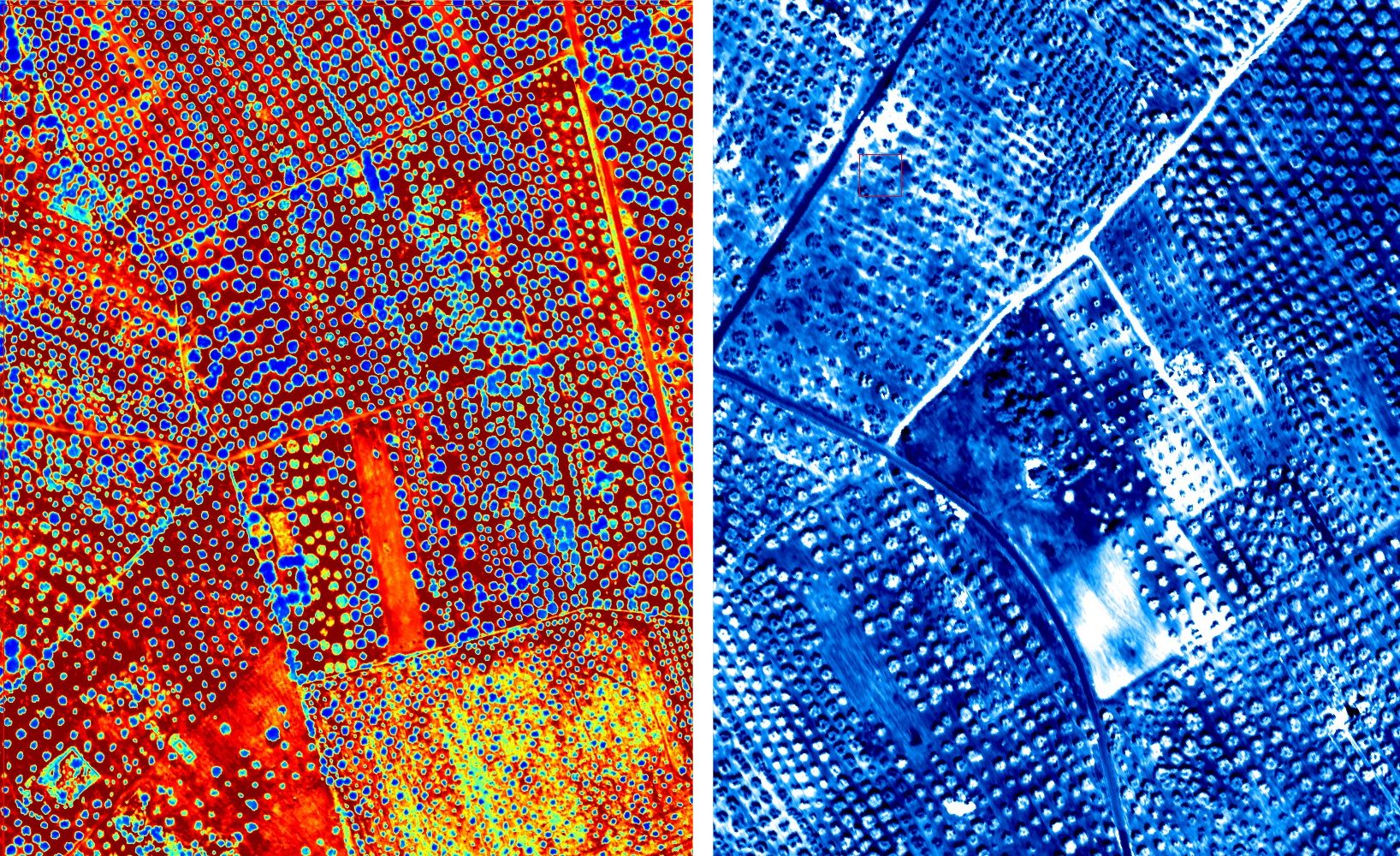 But with the rise of UAVs both for leisure use and in scientific research, some biologists are concerned that the technology could disrupt the very systems it’s meant to help study.

Although several groups have reported that drones can be flown surprisingly close to many animals without provoking an obvious behavioral response—one 2015 study found that wild greater flamingoes (Phoenicopterus roseus) barely reacted at all to a UAV hovering as few as four meters away—others have highlighted more-subtle responses from animals under surveillance.

A couple of years ago, for example, US researchers reported that American black bears (Ursus americanus) that had been fitted with cardiac biologgers showed a physiological stress response to drone flights even when they showed no obvious changes in behavior. Similar results were reported last August in breeding king penguins (Aptenodytes patagonicus), which exhibited significant increases in heart rate despite appearing undisturbed behaviorally.

Results such as these are unlikely to rule out the use of drones in biology, but they do underline the need for caution in study design—and for greater public awareness about the use of UAVs around wildlife, says Clarke.

“If it’s a one-off survey, and you increase the heart rate of your focal species for a few minutes, I’d think that’s pretty low risk and not that different to, say, a human observer or predator,” he says. “The real issue comes with repeated use—whether it’s recreational use over seabird colonies or other wildlife, or repeat scientific surveys; that’s when you want to be really careful about those small differences.”