These social animals keep tabs on aggressive members of the group and groom them less after fights to punish them.

ABOVE: Dwarf mongooses (Helogale parvula) pay attention to conflicts among other members of their groups, a study suggests. Shannon Wild

A growl from the aggressor, followed by a hip-slam. High-pitched squeals of surrender as the loser retreats. This is what a disagreement between two dwarf mongooses (Helogale parvula) looks and sounds like. It’s usually instigated by a dominant mongoose that wants to steal prey from a subordinate, and it’s not uncommon, even in this highly cooperative species.

Researchers from the University of Bristol have been studying this and other social behaviors in dwarf mongooses for years as part of the Dwarf Mongoose Research Project, a long-term investigation of free-living animals on Sorabi Rock Lodge Reserve in South Africa. The project was initiated in 2011 by Julie Kern, then a master’s student at the university, and has led to a number of findings about how mongooses manage within-group relationships, most recently as they relate to food-based disagreements. In addition to shedding light on how friendships and disputes are handled within mongoose society, results from the project could have implications for scientists’ understanding of social animals more broadly, say researchers.

Africa’s smallest carnivore—about the size of a 500 ml bottle when standing upright—dwarf mongooses live in groups (sometimes called “businesses”) of between 5 and 30 individuals, a mix of various relatives and unrelated immigrants. Though not as well-known as some of Africa’s iconic wildlife, dwarf mongooses have proved amenable to up-close observation, says behavioral ecologist Andrew Radford, Kern’s graduate advisor at Bristol. Indeed, the animals in the Dwarf Mongoose Research Project—now comprising eight groups—are habituated to the presence of researchers. Kern and her colleagues have used elongated paintbrushes to individually mark the study animals with harmless blonde hair dye, Radford notes. They’ve even trained some of the mongooses to climb onto balance scales to weigh themselves in exchange for a piece of hard-boiled egg.

While they’re habituated to humans, these animals are still in the wild and going about their natural behaviors, says Radford, now the principal investigator of the Dwarf Mongoose Research Project. He says the duration of the project has allowed Kern, himself, and their colleagues to run field experiments that might otherwise be impossible. “The dwarf mongooses are this wonderful, tractable study system for big questions about cooperation and conflict and how those get mediated by vocalizations,” he says, adding that they are also “amazingly cute and charismatic.”

A few years ago, Kern and Radford used audio playbacks to study how mongooses perceive groupmates’ actions, specifically when it comes to an individual taking on more than their fair share of work. Groups of mongooses move around their territory during the day, digging and foraging for invertebrates and other prey, explains Radford. Because they are vulnerable to a number of predators, one mongoose often serves as sentinel, foregoing eating so it can monitor the surroundings, and announcing that it’s on watch with what is known as a watchman’s song. In their experiment, the researchers played recordings of songs from specific dwarf mongooses to make it seem like those individuals were doing additional sentinel work and found that those individuals were rewarded later that day with extra grooming by their groupmates. 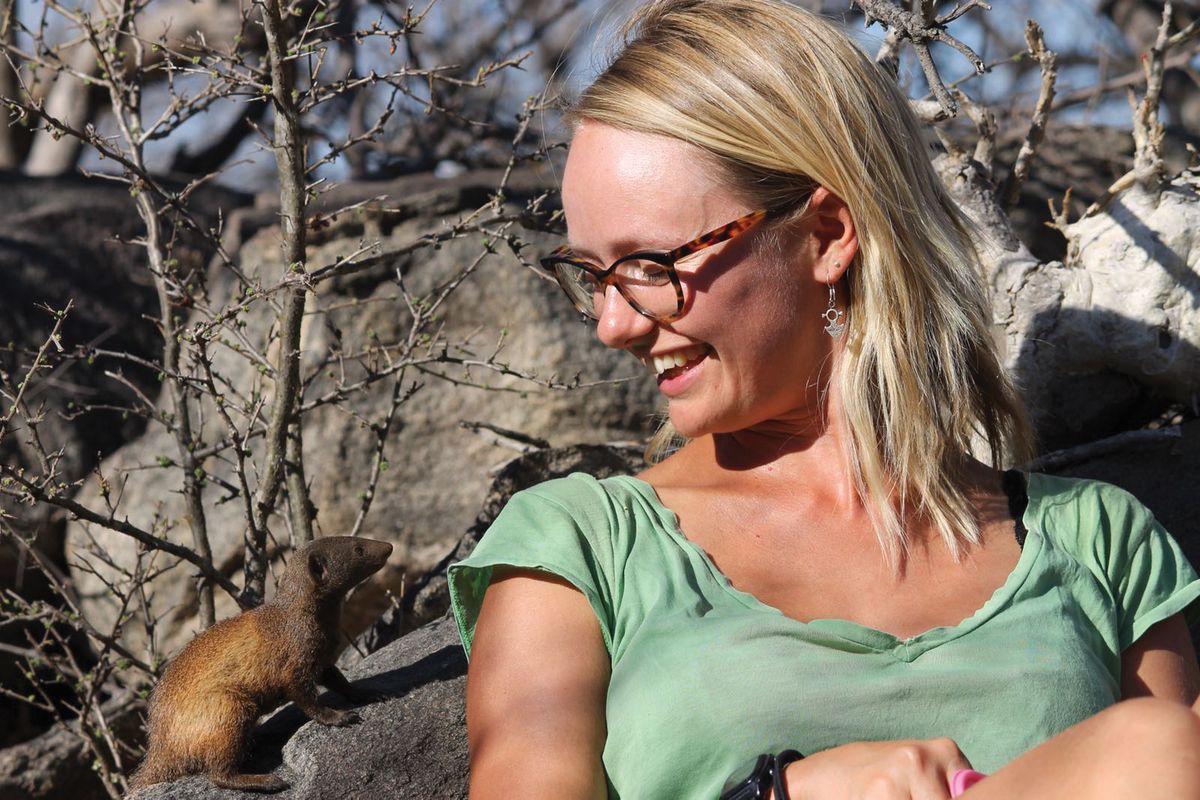 These findings inspired Radford’s then–PhD student Amy Morris-Drake to ask whether there might also be social consequences for mongooses who weren’t so well-behaved. Using recorded growls and squeals, Morris-Drake, Kern, and Radford crafted a recording simulating one of the dominant mongooses bullying a specific subordinate out of its meals. The track was played to the mongooses as they foraged over the course of an afternoon, so that group members heard what sounded like repeated conflicts between these two out-of-sight individuals.

There did not appear to be any change in behavior by the mongooses immediately after hearing the squabbles, says Radford. But the researchers found that, in the evening, mongooses that heard the simulated conflict reduced their grooming of the perceived aggressor while grooming one another more than usual. The results, published last November, suggest that mongooses not only tracked the behavior of their groupmates during the afternoon through their chatter, they acted on that information later in the day by shunning the bully. The researchers also saw hints that the simulated victim received slightly more grooming than usual, although Radford says that a larger sample size will be necessary to tease out the significance of these results. 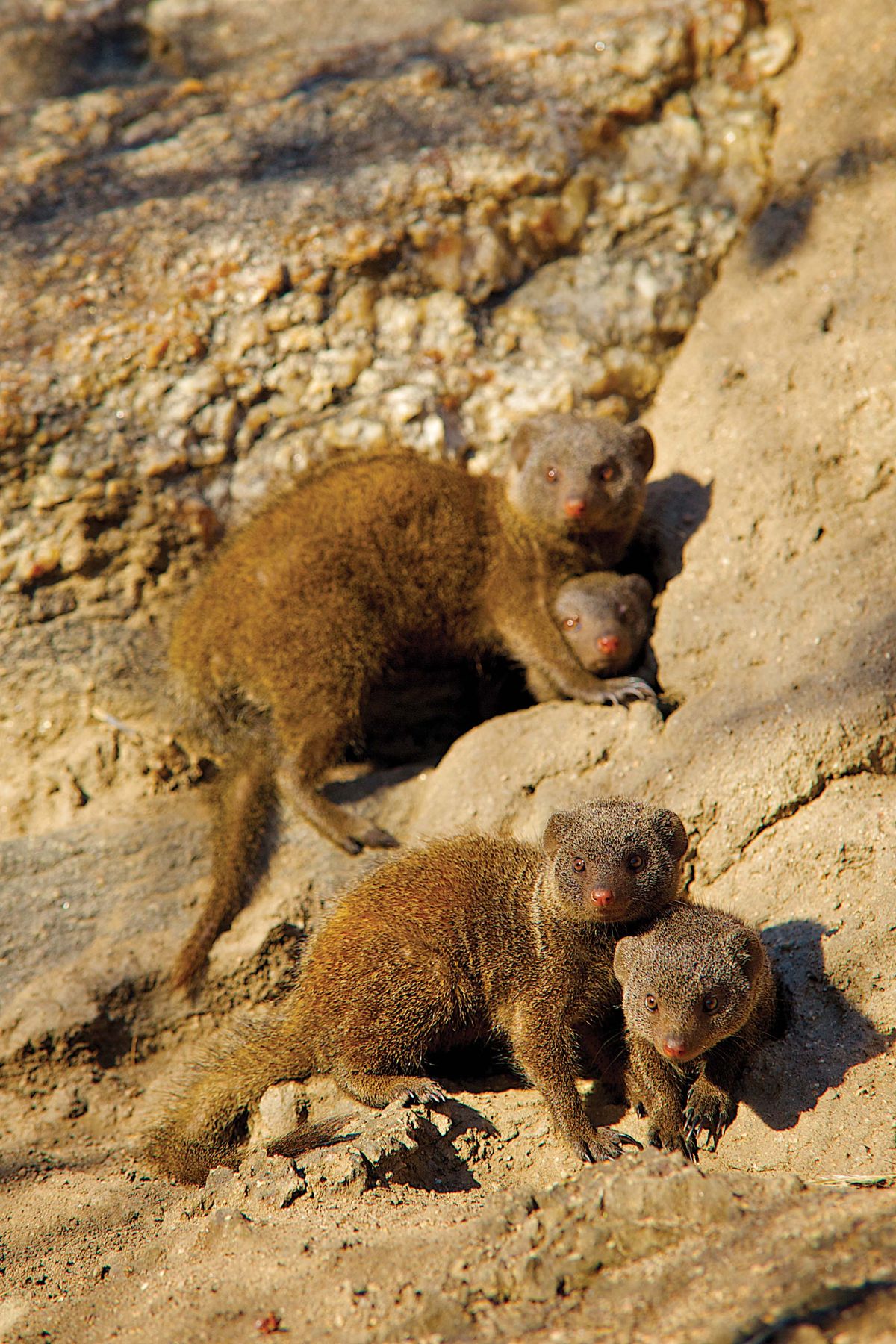 Faye Thompson, a behavioral ecologist at the University of Exeter who was not involved in the study, notes that a strength of this research is the combination of natural observations and experimental approaches. “This shows that these types of vocalizations provide rich social information to group members and that aggressive interactions can affect the social behavior of the whole group,” she writes in an email from her field site in Uganda.

Although conflict management strategies are known to have evolved in many social animals, little research had examined what happens beyond the immediate aftermath of a falling-out, says Radford.

“This study adds a new perspective,” says Bonaventura Majolo, a professor of social evolution in the University of Lincoln’s School of Psychology. Majolo, who was not involved in the mongoose research, says the study adds to a growing body of work suggesting that bystanders are also affected by conflicts. “The results show that conflict has cascading effects on a number of individuals, not just those involved in the fight or the genetic relatives or friends of the former opponents,” he says. “Conflicts may have significant and long-term effects on how social interactions are shaped in groups.”

Radford says that while it’s difficult to extrapolate the findings to other species, his gut tells him that other animals may also keep tabs on bullies and dole out punishment later. “There is no reason to think that dwarf mongooses are unique in this capacity,” he says. Majolo agrees, saying that studies such as this one have implications for understanding the socioecological factors driving conflict and the consequences for bullying in social animals more generally. “These studies on animals are important for understanding social evolution and in particular for making inferences about human evolution,” he says. “I believe the more we study other species, the more we see that similarities are more common than differences.”