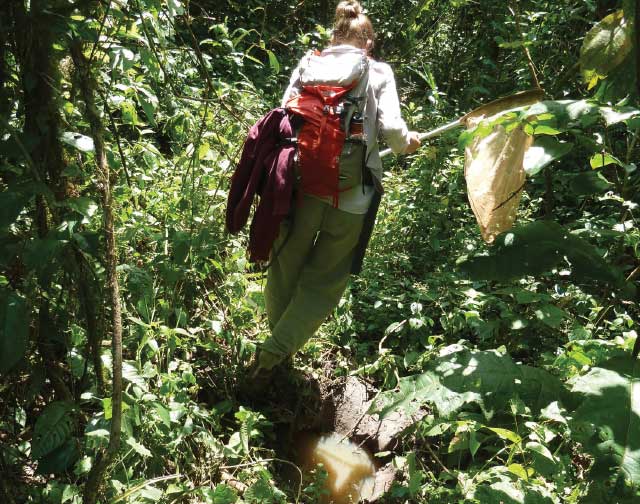 Wolfram Remmers, a graduate student at the University of Koblenz and Landau in Germany, had always wanted to visit a rainforest. So when the chance to take a summer field course with a nongovernmental organization, the Tropical Biology Association in Kibale National Park, cropped up in 2014, he leapt at the opportunity. “It was my first time in Africa,” Remmers says. “I was always fascinated in the biology of the tropics—and I was not disappointed!”

Spread over nearly 300 square miles in southern Uganda, Kibale National Park is famous for its diverse primate communities, as well as sizeable resident populations of big cats, birds, and the world’s largest land animal, the African bush elephant. The park has...

It all began with a puddle. “We came across these elephant footprints while we were walking through the forest,” he explains. “I was surprised to see that, even in the dry season, these footprints were filled with water.”

Remmers knew from having studied aquatic ecology that small animals—particularly invertebrates—use pools of stagnant water as habitats and breeding grounds. And a study in 2010 had found that the water-filled footprints of elephants are used for breeding by mosquitoes in India (EcoHealth, 7:498-506, 2010). But most research on the environmental impact of elephants has focused on more direct effects, from the animals’ dispersal of seeds through their guts or invertebrates on their skin, to their trampling of vegetation and erosion of landscapes. Remmers says he wondered whether elephants may be playing a larger, indirect role in invertebrate ecology if their footprints are actually inhabited by these little creatures.

After five days, we could already take more than 400 individual insects out of the 18 buckets. It was amazing.—Wolfram Remmers
University of Koblenz and Landau

Remmers teamed up with two other students and set out into the forest. They used a sieve to sample 30 elephant footprints over the course of three days. Their work turned up more than 2,700 specimens, including water beetles, mosquitoes, and dragonfly larvae, representing 61 distinct taxa, including 27 families or orders (Afr J Ecol, doi:10.1111/aje.12358, 2016). “It’s a preliminary study,” notes elephant researcher Gary Haynes of the University of Nevada, Reno. “But when you look at the fact that they identified 61 taxa—and there’s probably a lot more they haven’t yet identified—that’s a lot.”

Remmers and his team didn’t stop there. “We wanted to know how quickly—and in general how—[invertebrates] were colonizing the footprints,” he says. Because existing footprints were already colonized, he and his fellow researchers decided to make their own. Armed with buckets and digging equipment, the three students laid out six transects perpendicular to a stream; then, they sank buckets into the earth—three per transect at various distances from the stream—and filled them with water to create a set of footprint-size puddles. “It was a lot of work,” Remmers acknowledges. “We had a pickaxe and a shovel, and we dug 18 of those holes and carried the water from the stream to fill [them].”

The backbreaking effort paid off. By taking samples from the artificial footprints, the team observed the colonization of these pools in real time and found that it took place surprisingly quickly—particularly in footprints close to the stream, notes Remmers. Within hours, the team found water beetles paddling around in several of the recently constructed footprints, and spiders spinning webs over the pool’s surface. After five days, “we could already take more than 400 individual insects out of the 18 buckets,” Remmers says. “It was amazing.”

The findings both are and are not a surprise, notes Western Kentucky University’s Bruce Schulte, a biologist who studies herbivorous mammals and had previously found that vegetation damage by elephants could create habitat for amphibians and reptiles in Northern Tanzania (Afr J Ecol, 49:133-40, 2010). “It makes sense that these organisms would take advantage of these types of pools that the elephants create,” he says. “But what struck me was the scale. Elephant footprints are big relative to other species’ footprints, but you don’t really think of them as being a microcosm of aquatic macroinvertebrates.”

Although data were collected over only a few days, Remmers says that community composition differences between old and recently made natural footprint pools suggests a sort of succession—similar to how plant communities change with age or time from last disturbance. But researchers will need to collect longer-term data to confirm this hypothesis. For now, Schulte notes, the work provides only a snapshot. Remmers says he hopes to collect such data after completing his PhD, both on the long-term dynamics of footprint communities and on the importance of these pools in invertebrate ecology.

In the meantime, the team’s research provides food for thought, not to mention further incentive for elephant conservation, notes Haynes. “Elephants are ecosystem engineers,” he says. “But there’s a whole lot of things about elephants we don’t know much about.” The current study reflects that observation, Haynes says, and adds yet another facet of elephant-driven ecosystem engineering to the list.

“Anyone driving past the forest would notice the large-scale changes [elephants make], like the clearing out of vegetation and so on,” Haynes says. “But the little things in the footprint, that’s a whole other dimension. It’s one more thing that you can think of elephants having a hand in—or I guess a foot in, in this case.”