ABOVE: Hummingbirds such as this female Calypte costae don’t visit flowers where ants are present, researchers report. David Rankin

University of California, Riverside, ecologist Erin Wilson-Rankin didn’t set out to study hummingbirds. A few years ago, she and her then-postdoc C. Sheena Sidhu were conducting a field experiment on campus to see if honey bees avoid feeding on flowers with ants on them, something that could spare them harassment by the aggressive insects. It turned out that the bees indeed spent less time on ant-occupied flowers—and so, it seemed, did local hummingbirds.

The “charismatic” little birds, as Wilson-Rankin describes them, would fly up and then quickly move along, opting not to plunge their long beaks into that flower’s nectar. A follow-up study confirmed the observation: like the honey bees, hummingbirds avoided flowers (or feeders) when ants were present.

The researchers knew that the bees were using smell—the pollinators preferred feeding on flowers that didn’t reek of ant pheromones. But what about the birds? While the scientific community has long since discarded the old belief that most or all birds are anosmic, the olfactory bulb in most avian species is small, and hummingbirds have incredibly small brains to begin with. “Conventional wisdom was that if you have a really small olfactory bulb [and] very few neurons that are associated with olfaction, you’re not going to have a very good sense of smell,” Wilson-Rankin says. “Our first thought wasn’t odor,” she adds—the group suspected that the birds were using tactile or even gustatory cues. 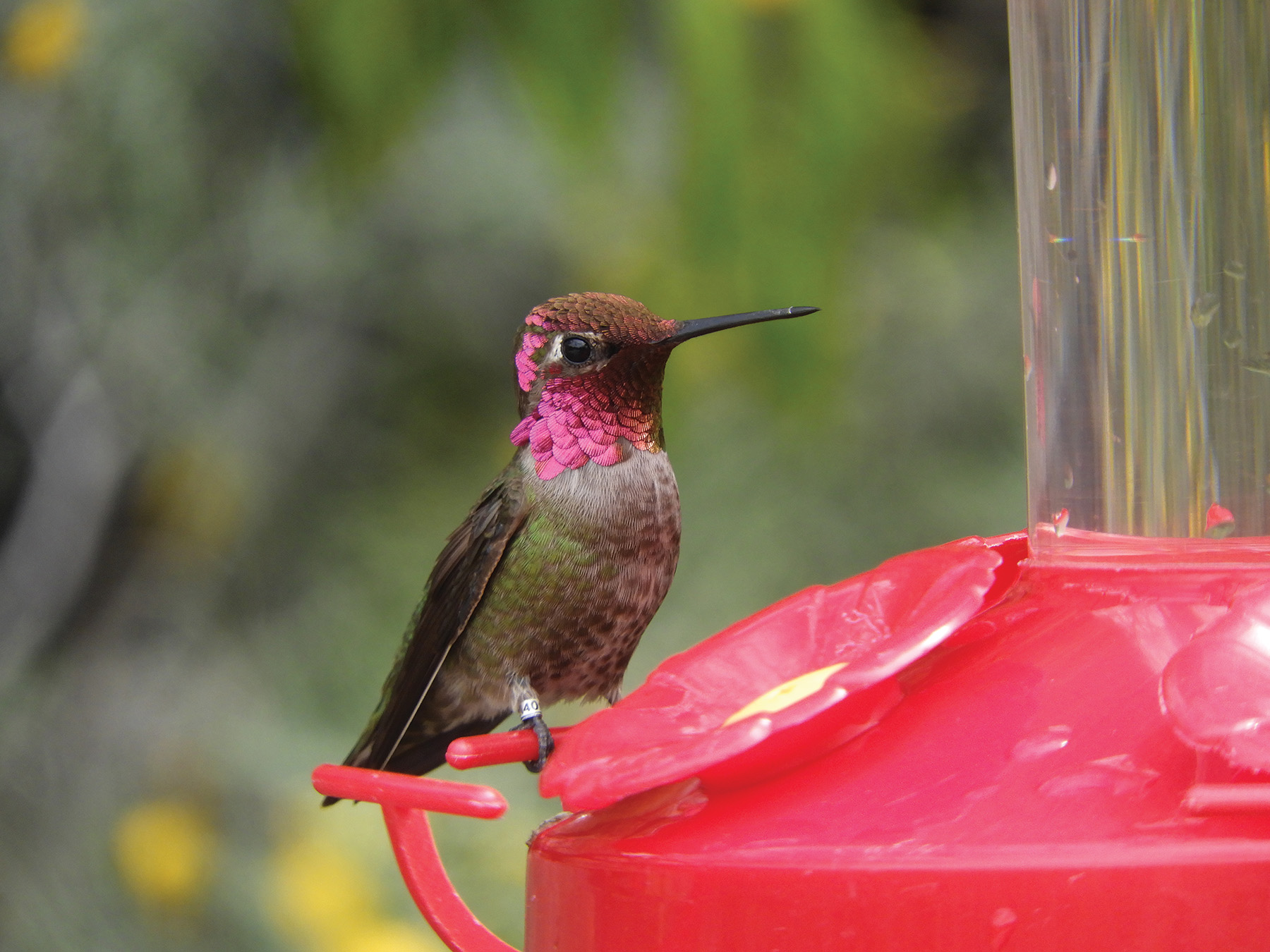 To dissect the observation, the team designed a new study that allowed hummingbirds to choose between a feeder with plain sugar water and an identical feeder containing sugar water laced with one of three chemicals: cuticular hydrocarbons found on honey bees’ exoskeletons; formic acid, a defense chemical released by Formica ants; and (Z)-9-hexadecenal, the ant aggregation pheromone they’d used in the bee study. The birds avoided feeders that smelled of the latter two, but not those that smelled of honey bees or a common food additive. “For specific contexts such as danger, they are responding to odors that are associated with . . . chemicals produced by insects,” says Wilson-Rankin. “They might not have many [olfactory] neurons, but they use those neurons to avoid dangerous [situations].”

Other birds appear to use smell to find food. In a study published the same month as Wilson-Rankin’s hummingbird experiments, conservation ecologist Juan Luis Celis-Diez of the school of agriculture at Pontificia Universidad Católica de Valparaíso in Chile and colleagues found that artificial prey worms placed on tree branches were more likely to be attacked by birds if dispensers of the aggregation pheromone of carpenter worm (Chilecomadia valdiviana) larvae were placed among them. According to Celis-Diez, the experiment was inspired by a study in Spain from a few years ago that used a similar design. That study found that insectivorous birds were attracted to a pheromone that female winter moths (Operophtera brumata) use to attract mates. “Smell in birds is more common than we thought before,” Celis-Diez tells The Scientist. 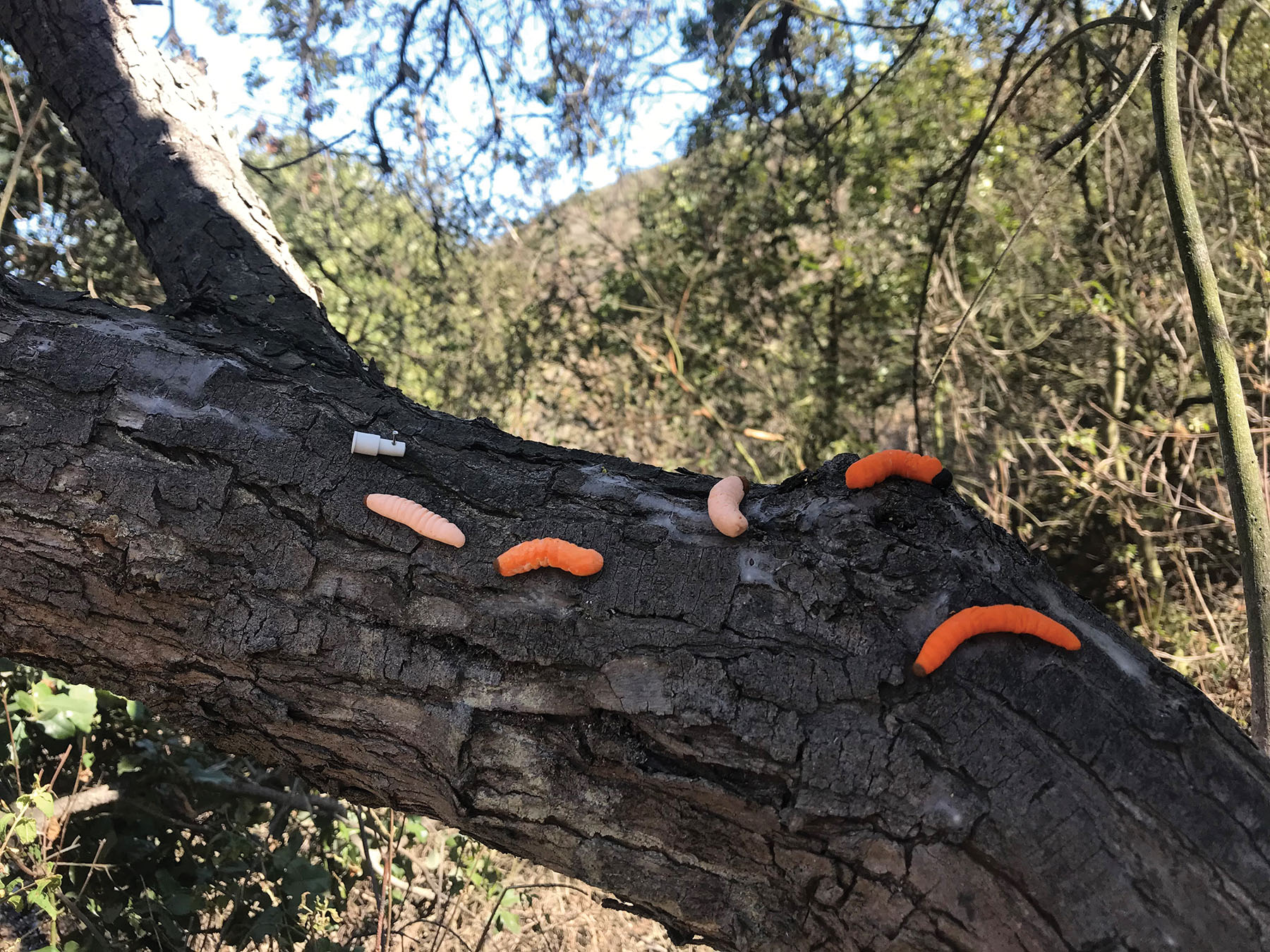 SMELLY WORMS: Artificial prey worms suffered more bird pecks when they were placed near a dispenser (left side of image) of the aggregation pheromone of carpenter worm (Chilecomadia valdiviana) larvae.
JUAN LUIS CELIS-DIEZ

While many avian-focused scientific manuscripts rehash the outdated belief that birds can’t smell, or can’t smell much, evidence to the contrary has been building for some time, says Andrew Iwaniuk, a neurobiologist at the University of Lethbridge in Canada. In 1960, Johns Hopkins University’s Betsy Bang looked at the relative size of the olfactory bulbs in birds and found that some species—in particular, vultures and a few others—did have quite sizable structures. More than half a century later, Iwaniuk and his colleagues found that the turkey vulture (Cathartes aura) has perhaps the biggest olfactory bulb of all birds, along with a high number of olfactory neurons that link the nasal cavity’s smell receptors with the brain, features indicative of a particularly sensitive sense of smell.

Alongside work on the anatomical basis of smell in birds were functional studies showing that vultures, and later wandering albatrosses and other seabirds, can pick up the scent of food—carrion in the case of vultures, and chemicals released by plankton on the ocean’s surface in the case of the wandering albatross. Decades of work starting in the 1960s has also demonstrated the importance of smell for homing pigeons’ navigation. Iwaniuk says there’s no arguing that the scientific consensus has shifted, and that scientists should adjust their manuscript introductions accordingly: instead of a statement about how birds have traditionally been considered anosmic, “just lead with, ‘We know that birds can smell.’”

Still, it’s only recently that researchers have begun to study smell in a much wider range of bird species for a broad spectrum of functions, including mate selection, subspecies identification, and navigation. “Now we’re in almost a renaissance, if you will, in studying olfaction in birds,” Iwaniuk notes. “There’s more and more people that are trying to determine what birds can smell, what kinds of cues are they paying attention to, what can they discriminate among.” Wilson-Rankin’s and Celis-Diez’s recent studies, neither of which Iwaniuk contributed to, are “two nice examples of that,” he adds.

Iwaniuk suspects that many birds are very sensitive to a small number of smells. “You could have an olfactory bulb that’s extremely small, but it’s really sensitive to a select number of or a select range of odors.” Wilson-Rankin agrees. In her work on hummingbirds, “we built on the work of others that found that just because you don’t have a lot of [olfactory] neurons doesn’t mean your sense of smell isn’t important in certain contexts.”