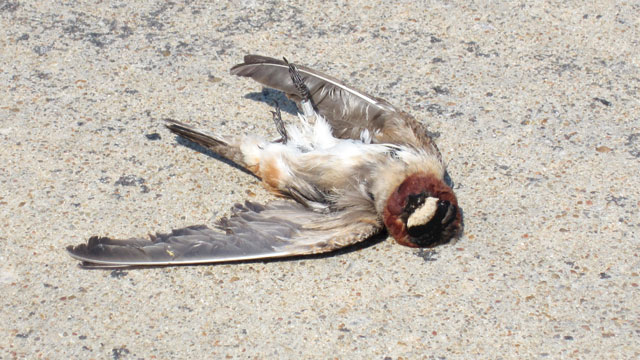 VEHICULAR BIRDSLAUGHTER: Some cliff swallows, like this one found dead on a road in western Nebraska, have longer wingspans than the population at large, suggesting they have failed to adapt to human-altered landscapes.PHOTO BY VALERIE A. O'BRIENFor the past 31 years, University of Tulsa biologist Charles Brown has been studying the social behavior of cliff swallows that summer on the pancake-flat plains of southwestern Nebraska. There, in the absence of cliffs, the birds build dense collections of their gourd-shaped nests under highway bridges and overpasses. During his daily travels visiting as many as 40 different nesting sites, Brown has seen a lot of roadkill—and whenever he spotted dead birds on the roadside, he pulled over to collect them. “Many were still in good shape, so I’d preserve them,” says Brown, a keen taxidermist. “I didn’t have any objective in mind; I just didn’t want good specimens to...

As the years passed, however, Brown noticed fewer and fewer dead swallows along the roadside. He knew that the overall population was on the rise, so he wondered what might explain the decline. Perhaps the birds could be adapting in response to road mortality, he thought. Having ruled out an increase in scavenger numbers, last year Brown decided to put his collections to use to see if there was anything different about the birds killed by onrushing cars compared to those accidently killed by sampling nets he’d set.

“The only difference was in wing length,” says Brown: vehicle-killed swallows had significantly longer wings, and thus broader wingspans, than those that died randomly in the nets, assumed to be representative of the population at large. And while the average wing length in the population had gone down since 1982, the average wing length of birds killed on the road had increased. Together, the results suggested that cliff swallows are adapting to avoid deadly collisions with cars (Current Biology, 23:233-34, 2013).

“Shorter wings may confer greater maneuverability to help the birds evade cars”—a trait that appears to have been selected for over time, says Brown. “We’re not saying the reduction in wing size is all because of cars,” he adds. It’s possible that changes in insect communities wrought by the shift to a corn monoculture could also select for shorter wings, or that the birds are simply learning to avoid cars. “But we think road mortality is an important factor,” he says, because it likely exerts a strong selection pressure.

The case of the cliff swallows is the latest in a growing body of research that suggests evolution can happen on much shorter timescales than previously imagined, especially in human-altered landscapes. Indeed, over the past decade or so, scores of studies have demonstrated that by introducing novel selection pressures, human incursions into natural ecosystems—from industrial pollution to commercial-scale harvesting of fish and other animals—can drive the evolution of organisms before our very eyes.

“It’s been a sea change in thinking,” says Steven Brady, an evolutionary biologist at Yale University. “We now know that evolution doesn’t just affect changes over very long periods of time, but affects changes over timescales we see in our lifetimes.”

And Brown’s work on traffic-dodging cliff swallows is not the only evidence suggesting that roads, in particular, are drivers of rapid evolution. Last year, Brady demonstrated that deicing salt and other pollutants running off of the roads that wind through the forests of northeastern Connecticut have resulted in noticeable adaptations in the spotted salamanders that hatch and grow up in roadside vernal pools.

Suspecting that the cocktail of contaminants seeping into these pools would exert a strong selection pressure, Brady tested his theory by transplanting eggs between roadside pools and unpolluted woodland pools located deeper inside the forests. He found that the two groups survive equally well into adulthood in the woodland pools. But the woodland salamanders transplanted into roadside pools survived in significantly smaller numbers than their roadside counterparts (Scientific Reports, doi:10.1038/srep00235, 2012).

“It looks like over the past 75 years, since these roads have been paved, the populations surviving in the roadside pools have evolved some sort of adaption to cope,” says Brady.

Brady adds that such rapid responses can be explained not only by the novel selection pressure applied by the roads, but also by the fact that roads carve up habitat, thereby limiting gene dispersal in animals that can’t fly. “One of things that can slow down evolutionary response is gene flow, but with a network of roads you end up with isolated populations, which could lead to these responses happening more rapidly.” In effect, he says, the roads of northeastern Connecticut are creating hotboxes for salamander evolution. “We’re essentially stacking the odds in favor of evolutionary responses on fast timescales.”

Whether this stacking of the odds is a result of road construction or of countless other man-made changes to natural landscapes, it’s clear that our increasing knowledge of evolution on contemporary timescales has implications for ecology and conservation, says Michael Kinnison, an evolutionary biologist at the University of Maine.

“We [currently] view species as static entities that only do certain things and respond in certain ways to their environments, sort of like standard pieces on a chessboard that can only make certain moves,” he explains. “But imagine how much more complicated the system gets when you realize that the players on that chess board can evolve, that their traits can change [on contemporary timescales], and after x number of moves they can do something different.”

Kinnison, one of the pioneers of “eco-evolutionary dynamics”—a subfield that studies the interface between evolution and ecology—says the big picture is still emerging from lots of small, specialized studies. “But it’s risen to the point where a lot of people are contemplating ways in which evolution could be influencing what they’re trying to understand and, ultimately, to manage.”

One way Kinnison and Brady hope to accelerate the work is by partnering with citizen scientists to track trait changes in real time across large areas. Such a project remains a “twinkle in the eye,” says Kinnison, who recently discussed the idea with Brady at a conference. Nevertheless, the ambition is to create “an evolutionary observatory of sorts, where people go out and measure how the traits of organisms in their backyards are changing over time.”

Those trait changes may provide early warning signs of long-term ecological outcomes, he says. “They may be able to warn us about whether [the evolution of] organisms can keep up with roads, pollution, climate change, and other human disturbances long before [the animals are] critically endangered, which is normally when we take notice.”