In a lab in Massachusetts General Hospital, mice lie in cages in a state of hypothermic suspended animation induced by a low dose of hydrogen sulfide gas (H2S). These chemically incapacitated animals have aged less than normal, effectively experiencing a slowing of time.

These lab mice are experiencing a condition similar to that induced by anesthesia. The setup is part of a series of experiments exploring suspended animation, headed by physician and anesthesiologist Fumito Ichinose of Massachusetts General and Harvard Medical School, and the premise for what would turn out to be a serendipitous discovery with potential applications for protecting the brain from hypoxia. Such dangerously low levels of oxygen can result from cardiac arrest or other medical problems that cause a restriction in blood flow.

We thought that repeating hydrogen sulfide inhalation might prolong suspended animation in mice, so we tested that. . . . We quickly found out that was not the case.

The research began after another lab’s 2005 discovery that H2S, a compound so toxic that it was used in World War I as a chemical weapon, could, at extremely low doses, safely induce a state similar to hibernation in mice. The gas caused the animals’ cells to temper their metabolism, researchers found, resulting in a deceleration of normal aging processes. While in this state, an animal’s heart rate and energy consumption go down, causing the body to stop producing heat. The mice in Ichinose’s lab typically have a core body temperature approaching room temperature, down from an average temperature of 36.6 °C.

According to Ken Olson, a cardiovascular physiologist at Notre Dame University who is not involved in Ichinose’s work, H2S is also a naturally occurring compound in the human body that has important biological functions. “Hydrogen sulfide [protects] cells from inflammation,” he writes in an email to The Scientist. Plus, “it serves as an antioxidant and as a signaling molecule to regulate a wide variety of body functions.”

Ichinose has long been interested in the potential of low doses of H2S to deanimate humans. “If suspended animation can be induced in humans, that could be quite useful. One potential application is space travel—people would need less food, for example, and they could conserve energy, which would greatly reduce the size and weight of the spacecraft.” He says he can also foresee a time, likely in the distant future, when suspended animation could be offered to terminally ill patients, effectively slowing time for them until cures or treatments are developed. 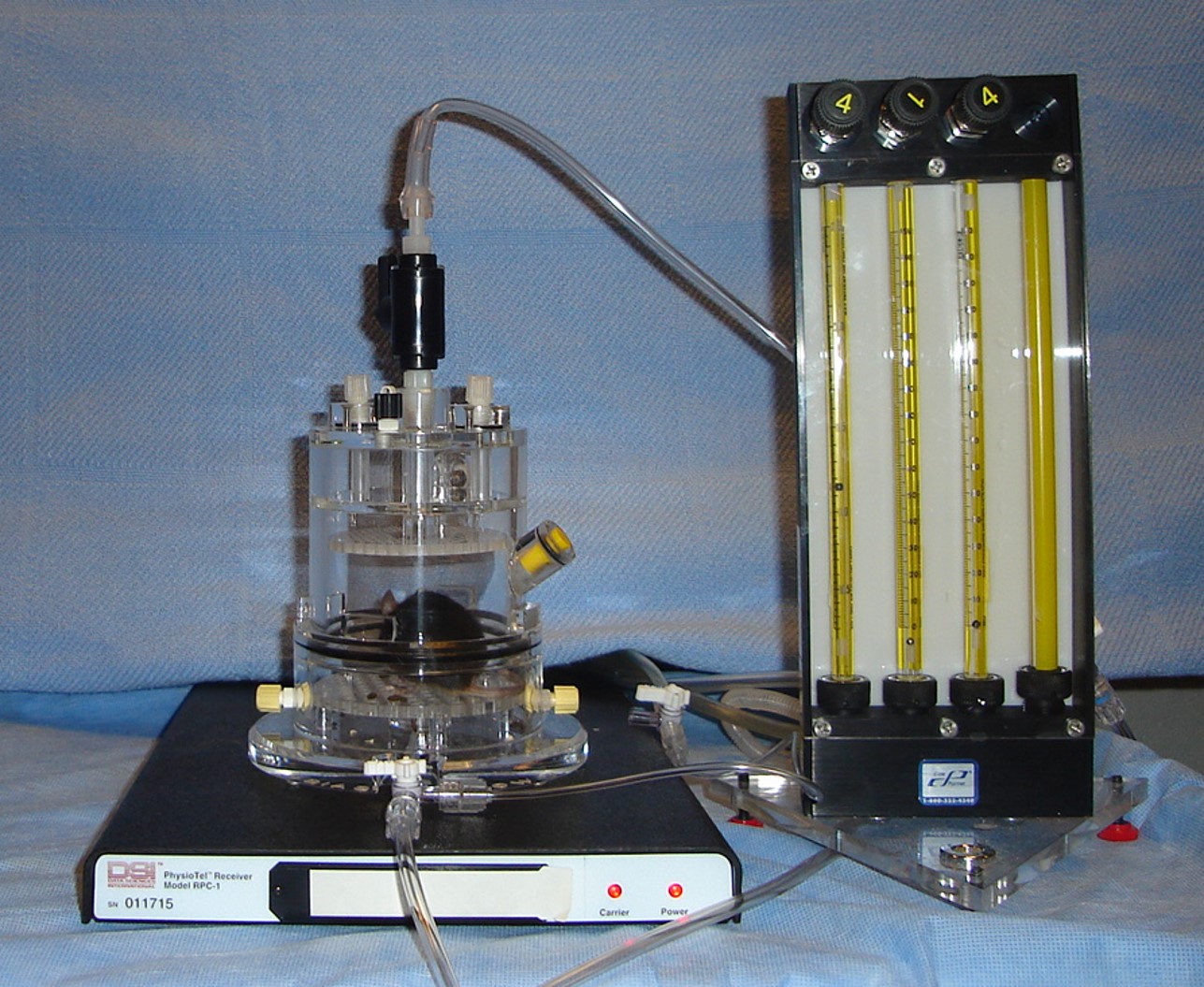 JUST SLEEPING: A mouse in a setup designed to induce suspended animation with H2S
COURTESY OF FUMITO ICHINOSE

With these possibilities in mind, in a recent experiment, Ichinose and his colleagues attempted to extend the period of H2S-induced suspended animation in mice by continuously topping up the supply of the gas in the brain. But what happened surprised the researchers. “We thought that repeating hydrogen sulfide inhalation might prolong suspended animation in mice, so we tested that,” Ichinose says. “And we quickly found out that was not the case. The mice quickly developed tolerance.” Indeed, the mice were able to maintain normal metabolic activity, and the gas no longer induced suspended animation to the extent seen during earlier exposures.

Undeterred, the researchers decided to look into what, exactly, might be supporting this tolerance. Specifically, they wondered if the mice had somehow increased their capacity to break down H2S. After some trial and error, they discovered that levels of an enzyme called sulfide:quinone oxidoreductase (SQOR), which is normally only found in very low concentrations in brain cells, were increasing in the mouse brains. The buildup occurred as the animals developed a tolerance to H2S, and rose to well beyond typical levels.

It was this result that led them to identify an unexpected role for SQOR in preventing harmful effects that arise during hypoxia. Normally when the brain is starved of oxygen, there’s a buildup of H2S to the point where it begins preventing the function of mitochondria within neurons, explains Olsen. But the team found that SQOR was averting this harmful effect in mice by keeping H2S levels down. The new study “is novel in that it clearly shows that SQOR can [help to] maintain energy production,” Olsen writes. “This explains why cells low in SQOR, i.e., brain cells, are especially susceptible to hypoxia, which is often seen [in] a stroke or related forms of brain injury.”

For some patients, treatment with a sulfide scavenger might be lifesaving.

The connection between SQOR and hypoxia tolerance was corroborated when the researchers analyzed tissue samples from thirteen-lined ground squirrels (Ictidomys tridecemlineatus). Study coauthor Eizo Marutani, also at Harvard, says that these animals “are known to be very hypoxia tolerant, especially in the brain. . . . So we examined SQOR levels and surprisingly discovered they were very high,” suggesting an evolutionary adaptation for these animals, which live in burrows and thus are regularly exposed to low-oxygen conditions.

Hideo Kimura, a researcher at the National Center of Neurology and Psychiatry in Japan who investigates the biological effects of H2S and has previously collaborated with Ichinose but was not involved in the current research, says the findings raise the prospect of studying SQOR in hypoxia tolerance in larger mammals. “Suspended animation [with H2S] may be dependent on the species size—it worked in mice but not in bigger animals such as piglets and sheep,” he notes.

Still, it’s not feasible to inject SQOR into the human brain under conditions of oxygen deprivation, Ichinose notes in an email. A clinical extension of the research, therefore, is to find a drug that could possibly mimic the effects of this enzyme. Ichinose and Marutani have found that SS-20, an experimental drug that “scavenges” H2S, performs a similar function to SQOR, demonstrating that a pharmaceutical approach may be possible, Ichinose says. SS-20, however, is very unspecific, meaning that it also scavenges vital compounds along with H2S, so it would not be feasible to use in patients.

Ichinose says that he and Marutani are now trying to create their own compound. “We’re developing a scavenger more specific to H2S. If we find one, we could go on to a large animal study or even to a human study if it’s safe,” says Ichinose. “For some patients,” he adds, “treatment with a sulfide scavenger might be lifesaving.”