Millions of years ago, hundreds of light-years from Earth, massive stars started to explode. As they died, the stars spewed energetic particles into space, many of which rocketed toward Earth, tearing through the atmosphere and causing a surge in the electric charge of the layers of air closest to the planet’s surface. Researchers studying the Earthly effects of these stellar explosions hypothesize that this electric boost triggered lightning storms and sparked wildfires that burned the forests of Africa, turning them to grasslands.

One of these researchers, University of Kansas physicist Adrian Melott, says he thinks that these lightning storms and wildfires also could have played a role in hominins’ transition to walking on two feet. According to Melott, supernovae-induced fires would have left just a few trees scattered across the landscape. For our tree-living ancestors, “[this] encouraged bipedalism,” he says, “because we had to get from one tree to another.”

Bipedalism is a horrible form of locomotion. We are miserably adapted to it, even after 6 million years of doing it.

In May, Melott and Brian Thomas of Washburn University in Topeka, Kansas, published a paper detailing the proposed connections between these stellar explosions, which started roughly 7 million years ago in a nearby part of the Milky Way, and the bipedalism transition (J Geol, 127:475–81, 2019). The authors’ argument ties in with an existing idea, known as the savannah theory, that a change from forest to grassland could have spurred our hominin ancestors in Africa to stand up to see what tree to walk to next and to check for predators that might be lurking among the grasses. By providing data on what caused our ancestors’ landscape to change, the team’s study helps flesh out this particular hypothesis, Melott says.

The study is just the latest of many to tackle the origins of bipedalism—but it hasn’t particularly convinced anthropologists. “It is an interesting hypothesis,” Bernhard Zipfel, an expert on human evolution at the University of the Witwatersrand, Johannesburg, writes in an email to The Scientist. But gathering convincing evidence to support any bipedalism hypothesis is extremely difficult, he notes.

Owen Lovejoy, an anthropologist at Kent State University in Ohio, is more blunt, calling the hypothesis both “bizarre” and “weird.” It doesn’t match the fossil record and can’t account for just how significant an adaptation bipedalism was at the time it arose, he says. According to the fossil record, hominins were definitely walking upright by the time of Australopithecus roughly 4 million years ago, and possibly as early as the time of Sahelanthropus, 7 million years ago. And many of the fossils showing evidence of bipedalism have been found alongside those of woodland animals, suggesting that the behavior evolved while our hominin ancestors still lived in forests. This evidence would rule out the savannah theory and, in turn, the supernova-lightning hypothesis, he says.

But if bipedalism evolved before our ancestors left the forests, what might have driven its spread? Part of the reason anthropologists and evolutionary biologists have trouble coming up with answers is that, from many perspectives, bipedalism “is a horrible form of locomotion,” Lovejoy says. “We are miserably adapted to it, even after 6 million years of doing it.” Walking upright can be slow and unsteady, and it leaves us prone to falls. For bipedalism to take hold, he says, it had to have huge advantages.

Researchers have proposed several ideas, ranging from better presentation of sexual display signals to the ability to wade in water to improved vigilance. Bipedalism could also have helped ancient hominins find and transport food, an idea supported by the observation that chimpanzees stand up and walk on two legs when they are carrying rare and coveted food, freeing their hands to hold more of it (Curr Biol, 22:PR180–R181, 2012). 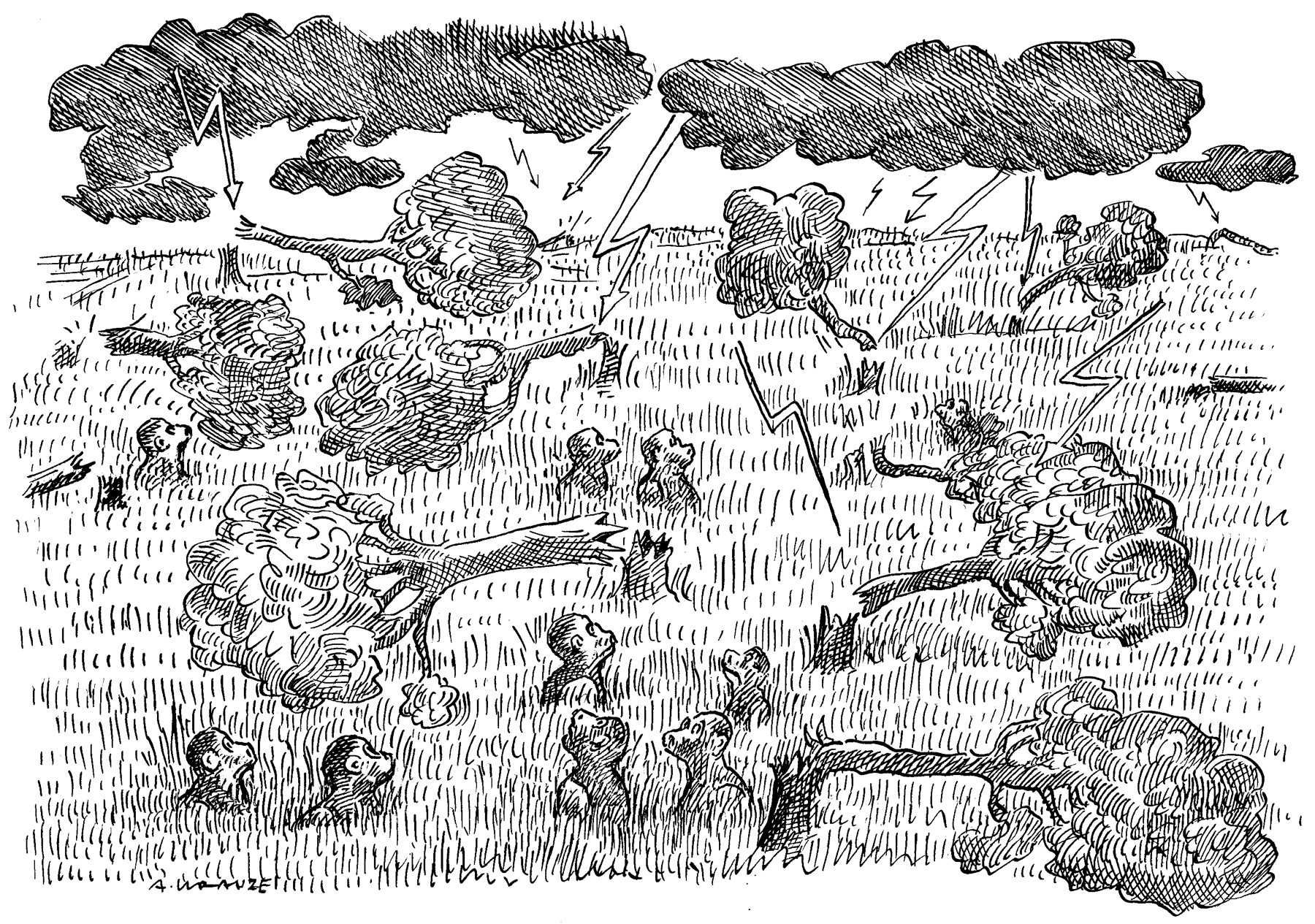 Lovejoy supports this hypothesis, but says he thinks the story might be more complex. He and his colleagues propose hominin bipedalism arose as part of a reproductive adaptation, perhaps as our ancestors evolved from polygamous societies toward more monogamous ones (PNAS, 115:E1108–16, 2018). The fossil record shows that, around the time that researchers think the transition to bipedalism was happening, apes seemed to be evolving traits associated with less aggression, such as smaller canine teeth. Lovejoy says he thinks that this was partly due to sexual selection by females for males that were better providers instead of better aggressors. Because walking upright might have allowed males to carry more food, this sexual selection therefore could also have favored bipedalism.

It’s an interesting hypothesis and has merit, Zipfel says. However, there’s evidence that early bipedal hominins may not have been monogamous, and there may be more than one reason for hominins to have stood up and started walking. In his mind, still, “the drivers of human bipedalism remain largely elusive.”