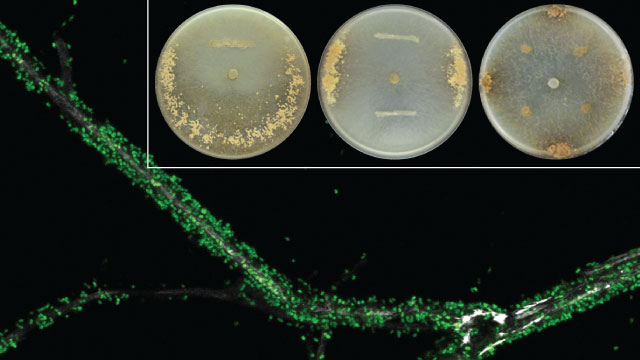 Every spring, several students from the microbiology lab at the Université de Neuchâtel in Switzerland take to the woods that surround the town. Their mission is not scientific, but culinary. As part of a local mycology club, they hunt for morels, fungal delicacies prized in kitchens around the world for their earthy, nutty flavor.

Microbiology group leader Pilar Junier says that during morel season in Switzerland, restaurants everywhere advertise food prepared with morels, and “it’s delicious.” But beyond her taste for the fungus, Junier has a scientific interest in morels. She is a trained bacteriologist, but she works side by side with mycologist Daniel...

Junier and Job wanted to understand the interactions between bacteria and fungi at a basic level, so they chose two species that have been well studied in the past. They had previously isolated fungal cells from the thick-footed morel, Morchella crassipes, from woods near the university, and they cultured it on petri dishes with a bacterial species (Pseudomonas putida) commonly found in soil. M. crassipes shunts melanin to its filamentous growth structures, called hyphae, in response to stress, and also forms sclerotia—thickened hyphae—to store nutrients through the winter, from which the fruiting bodies reemerge in the spring. These sclerotia are the reason that morel hunters can return to the same patch of forest each season to bag their quarry. The structures are also easy to visualize in the lab. The researchers expected that sclerotia formation and melanization would give them clues about how M. crassipes and P. putida interacted.

When Junier and Job cultured M. crassipes and P. putida together, they saw that the fungi formed sclerotia at the point on the plate farthest from the spot where the bacteria had been inoculated (Proc R Soc B, doi:10.1098/rspb.2013.2242, 2013). Over a series of experiments, the researchers observed the fungus dispersing the bacteria, then feeding them with fungal exudates, and finally harvesting carbon from the bacteria and storing it in sclerotia. The research team also showed that fungi grown without bacteria had hyphae that melanized more under stress conditions; that isolated sclerotia were packed with bacteria, which the fungi could redistribute on a fresh plate for a later harvest; and that, of two other species of bacteria, only one induced specific sclerotia formation.

“All these complementary experiments obviously led us to think, ‘OK, this is farming,’” says Junier. Convincing journal reviewers, however, led to a “long discussion” about whether what they were observing could really be considered agriculture of some sort.

Other experts echoed reviewers’ questions. “I would ask whether there’s really evidence that the fungi are farming the bacteria, or is it just something that’s evolved as a mutualistic relationship over millions and millions of years?” says Lynne Boddy, a professor at Cardiff University in the United Kingdom. “The fungi and the bacteria are intimately connected, but is it right to call it farming? I think perhaps that might be going a little bit too far.”

Instances of interspecies farming do exist, notes Boddy. “For example, some of the higher termites and some ants are described as farming.” Indeed, some insect species bring food back to their nests, feed it to fungi, and then eat from their fungal gardens. “The ants and the termites keep out any competing organisms, and they eat some of the fungus as a nutrient source, because obviously ants and termites can’t break down wood and leaf litter themselves.”

“Farming, in my interpretation, would be one organism using another organism to acquire a resource that they couldn’t otherwise get,” says Johannes Rousk of Lund University in Sweden. He would have liked to see Junier and Job introduce a mix of bacterial species in culture with M. crassipes, in order to address whether the interaction between P. putida and the fungus is specific and to more closely replicate actual soil systems, which often harbor many species of bacteria and fungi.

Wietse de Boer, who studies fungal-bacterial interactions in the department of microbial ecology at the Netherlands Institute of Ecology, also questions the use of the term “farming” to describe the interaction between M. crassipes and P. putida. “Both the fungus and the bacterium can consume the primary food resources supplied in the growth medium, so the fungus is not dependent on the bacterium as a food resource,” he wrote in an e-mail to The Scientist.

“We can grow the fungus without the bacteria, and we can grow the bacteria without the fungus,” acknowledges Junier, “but . . . of course, this was a pair that we made in the laboratory.” Junier expects that as they go back to the field and isolate more fungi, they will find fungal-bacterial pairs that are dependent upon each other, which would suggest an agricultural relationship between the two.

Besides the distribution, feeding, and harvesting of the bacteria by the fungus, two other observations convinced Junier that what they saw was truly farming. The ability of sclerotia to store bacteria and then later redistribute them on a fresh plate is similar to seed storage in human agriculture. Junier explains that they also observed M. crassipes harvesting carbon from the bacteria in one area and storing it in another, which mirrors the way that humans use farm animals.

However one interprets the findings, experts agree that they point to the existence of previously unsuspected interactions between fungi and bacteria in soil. “I hope that people will change the way they look at fungi” and their interactions with bacteria, says Junier, and “start to discover even more complex [fungal] behaviors.”

“What they’re doing in pure culture is extremely important to identify putative mechanisms that . . . we can use to generate hypotheses in a slightly more complicated system,” says Rousk. Even though he emphasizes that he does not think the authors have demonstrated a farming relationship, Rousk admits he finds the results intriguing. “If fungi actually used bacteria in a farming-type way, that would be biologically fascinating.”