Images from a Cold War spy satellite help researchers piece together the effects of land-use decisions in Kazakhstan.

ABOVE: Researchers used images taken by the Corona satellite system decades ago to track declines in marmot populations in Kazakhstan.
ALYONA KOSHKINA

In 1960, in a milestone that would remain classified for more than three decades, the US Air Force, CIA, and private industry partners launched the world’s first photo-snapping satellite into orbit. Known as Corona, the satellite and its successors would be sent on periodic missions for the following 12 years, chiefly targeting sites of strategic interest such as military airfields and missile silos within the territories of the Soviet Union and its allies. Once the satellite had shot its strip of film, it would release the photos in a parachute-equipped capsule over the Pacific, to be retrieved by a military plane before it could hit the water.

“I think it’s [a] really great example of human ingenuity that they were able to take such astounding photos already back then,” says Volker Radeloff, an ecologist at the University of Wisconsin–Madison. After the program and its 800,000 images were declassified in 1995, Radeloff recognized that repository as a potential treasure trove of ecological information, a chance to trace changes in landscapes over time. He and his colleagues have since mined the images to reveal changes in forest cover along the Latvian-Russian border and a surge in tree-felling that occurred in Romania in the 1960s.

Radeloff’s former student Catalina Munteanu, who coauthored the Romania study, was speaking a couple years ago with some ecologists who were involved in a project to tease out the interplay between agriculture and biodiversity on the Kazakh steppe, when the topic of the bobak marmot (Marmota bobak) came up—specifically, the difficulty of getting historical data on the rodents’ populations. These marmots are important from an ecological point of view, Munteanu notes, because they turn over soil and fertilize it with their feces, and their abandoned burrows provide homes for other animals such as foxes and burrowing owls. “They sustain a lot of biodiversity in the steppe, and they are a very good indicator for the overall health of the ecosystem,” says Munteanu, who at the time was a postdoc at the Leibniz Institute of Agricultural Development in Transition Economies in Germany. The ecologists wanted to know how the marmots had fared given dramatic land-use changes in Kazakhstan during the Soviet era and after the USSR’s collapse. 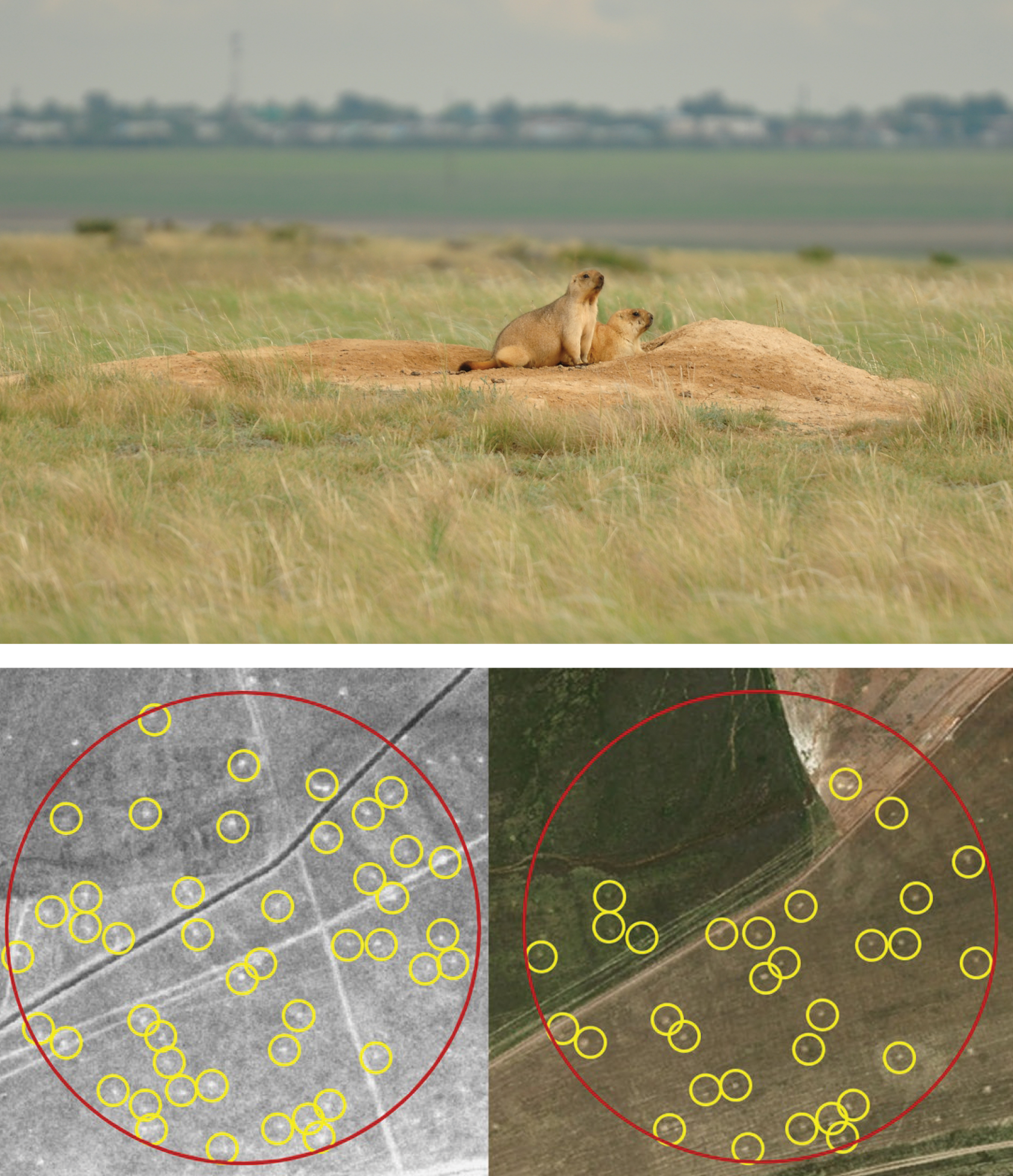 MARMOT MAPS: Marmot burrows are visible on satellite images thanks to the mounds of soil that the rodents make as they tunnel into the ground (above). Many of the burrows researchers observed in images taken in the 1960s (below left) had been abandoned by the 2000s (below right).
ALYONA KOSHKINA; PROC R SOC B, 287:20192897, 2020.

Munteanu suggested to the researchers that they might use Corona photos to track Cold War–era marmot burrows. It was meant half-jokingly, she says. “But then we pulled out some images, and we saw that we could actually see the marmot burrows.” The researchers could find them thanks to mounds of soil that pile up as the marmots tunnel into the ground—on the satellite images these appeared as little spots, a few meters across, that were lighter-colored than their surroundings.

The team compared Corona images taken in 1968 and ’69, soon after a Soviet campaign to ramp up food production motivated the conversion of many grasslands in northern Kazakhstan to cropland, with modern satellite imagery taken of the same areas between 1999 and 2017. Munteanu and her colleagues saw that, initially, the animals seemed to do fine in the newly-cultivated fields—in fact, the overall density of burrows was higher in the fields than in grasslands across both the 1960s images and their more contemporary counterparts.

We need historical information to understand how species are affected by agriculture and other human activities.

But although the marmots are philopatric—meaning that they normally return to the same burrows year after year, generation after generation—about 60 percent of the historical burrows on land cultivated since the 1960s had disappeared, as indicated by a lack of halos of freshly turned soil in the more recent images. Across the studied area, the number of burrows declined by 14 percent over the period encompassed by the study, with long-cultivated lands showing the steepest declines. Meanwhile, the number of burrows in grasslands that remained uncultivated rose by 17 percent. “It wasn’t the single event of converting the marmots’ habitat, but it was the persistent agriculture that led to the decline of the species” in the area, Munteanu posits.

Munteanu, now a postdoc at Humboldt University, suspects that what’s happening with the marmots is that “when one shock occurs—their homes are destroyed by cropping—they tend to come back [and rebuild], and they do this again and again,” so there aren’t obvious population declines in the short term. “But when we look at these long time spans . . . we realize that this coming back and rebuilding means investing a lot of energy in maintaining the housing,” leaving less energy for tasks such as gathering food and caring for young, and eventually causing a decline in the population. A key takeaway for humans making planning decisions that affect the environment, she says, is to consider such potential long-term ecological effects when making changes to the landscape.

Radeloff, who was not involved in the research but has collaborated with several of its authors, agrees. “It highlights that we need historical information to understand how species are affected by agriculture and other human activities,” he says.

The study is an interesting and rare example of an ecological application for Corona data, says Melanie Vanderhoof, a geographer with the US Geological Survey who was not involved in the project but uses satellite images in her own research. “One of the major limitations in relying on satellite imagery for lots of applications is the date range over which the satellite imagery is available,” she notes. “It can be hugely advantageous” to make use of earlier satellite imagery when possible. That said, the black-and-white Corona images aren’t as information-rich as those from newer satellites, which can capture reflected light in various color and infrared bands, she notes, making the Corona images harder to analyze accurately using artificial intelligence techniques. For that reason, she says, “it seems like [Corona] imagery would work best for localized applications that don’t require automating the detection or image classification process.”

The new research convincingly ties changes in land use to a decline in marmot populations, says Ken Armitage, an emeritus professor at the University of Kansas who studied the animals for decades. For him, though, a drawback of the study is its “inability to distinguish between grazed and ungrazed grassland” in the satellite images. That’s important, he says, because other studies have found that marmots do well in grasslands grazed by larger animals, but not in areas filled with tough, tall grasses. Despite the downsides of cultivated fields from marmots’ point of view, then, “they could well be doing much better on the cropland then they did on the ungrazed grassland,” he says.

Munteanu acknowledges that her team’s approach was unable to distinguish between these two grassland states, but says this doesn’t affect the study’s finding that persistent agriculture was associated with declining marmot populations. She and her colleagues are now working on using spy satellite data to examine the effects of livestock grazing on the Kazakh steppe. “We hope that we can find new ways to evaluate biodiversity based on these historical data sources,” she says. “I think there are endless possibilities for this [satellite] data . . . and many of them relate to areas that maybe are otherwise out of reach for scientists.”