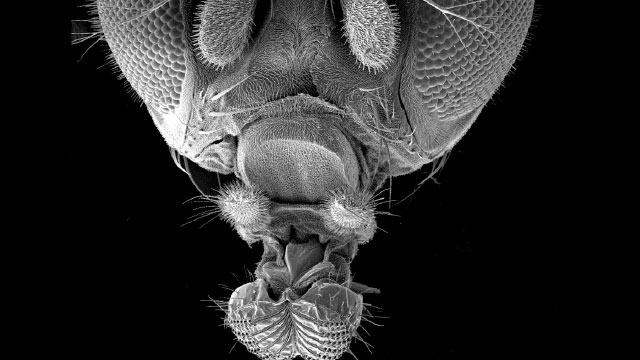 Every couple of weeks, Naoyuki Fuse steps into a darkroom carrying a handful of milk bottles. In the reddish gloom, he transfers the contents of existing bottles into the new ones he’s brought in, one after the other, until all the old bottles are empty. He’s been doing this for eight years now—for the previous five decades, it was someone else’s job. But carrying out this chore regularly and carefully is critical for the bottles’ contents: members of a population of very special fruit flies that have spent the last 62 years evolving in the dark.

“It’s tough work, especially over a long time,” admits Fuse, a molecular developmental biologist who’s part of an ongoing project at Kyoto University using these flies to identify genes involved in adaptation to life without light.

Dark-fly, as the Drosophila melanogaster...

You can get a complete “fossil record” of evolution.— Jeffrey Barrick,
University of Texas at Austin

Done right, says molecular biologist Jeffrey Barrick of the University of Texas at Austin, this sort of approach can be extremely powerful. Keeping track of populations evolving in controlled lab conditions, “you can get a complete ‘fossil record’ of evolution,” he says. “There are no missing links if it’s done very carefully from the beginning.”

But the Dark-fly study was not originally envisioned as a decades-long project, meaning that various precautions that are common practice in long-running evolution experiments—such as keeping populations large and avoiding inbreeding—were not established at the outset.

And, vexingly, only a fraction of the original fly lines have survived. “In some cases, the incubator broke, and the temperature collapsed,” says Fuse. “Another time, fungi grew on the fly food.” All three original control lines were lost, and only one of the three Dark-fly lines lived beyond 2002, eliminating the possibility of making direct comparisons between populations evolving in parallel.

“That was very unfortunate for the experiment,” notes Barrick, who collaborates with Michigan State University’s Richard Lenski on a now 28-year evolution project in E. coli. Microbes can be stored frozen, Barrick adds, so that “if something goes wrong, you can always go back to the freezer. The game is saved, so to speak.” Flies, by contrast, don’t freeze well—they’re either living and breeding, or unusable.

To get at the genetic factors underlying these differences, the researchers sequenced Dark-fly’s genome, identifying 220,000 single-nucleotide polymorphisms, or SNPs (PLOS ONE, 7: e33288, 2012). Approximately 2 percent of those SNPs, in more than 4,300 genes, were nonsynonymous—i.e., they caused changes in amino acid sequences.

But the interpretation of these data in light of Dark-fly’s small, unreplicated population proved difficult. “In any one population, in fruit flies or any lab organisms, you’re always going to have accidents of genetic drift which will fix deleterious alleles,” explains Michael Rose, an evolutionary biologist at the University of California, Irvine. Without replicates to confirm the consistent appearance of supposedly adaptive mutations, “you don’t know which features of genomic differentiation are due to genetic drift versus due to the effect of selection.”

So the Kyoto researchers tried another approach. They interbred multiple populations of wild-type flies with Dark-fly, and kept the resulting mixed populations in one of two conditions: normal light, or total darkness. After 0, 22, and 49 generations, the team analyzed the genomes represented in each population, and identified mutations in 84 genes that repeatedly cropped up in dark-kept offspring (G3, 6:365-75, 2016).

“Experimental breeding gives a clearer answer of what genes are involved in selection,” explains Anna Kukekova, a molecular geneticist at the University of Illinois at Urbana-Champaign who studies evolution in experimental, five-decade-old populations of silver foxes. Although some loci may never be fixed completely, she adds, identifying alleles common to offspring from parallel experiments in selective environments may highlight particular mutations that confer an advantage.

Fuse and his colleagues have already linked some of the identified genes to chemoreception and pheromone synthesis, hinting at potentially adaptive shifts in communication by Dark-fly. But many of the 84 candidate genes have never been studied—not an uncommon result in evolution experiments, Barrick notes. “You learn something about genes that are clearly important—that you would never learn by doing a genetic screen—by letting evolution last longer in these interesting environments.”

The goal now will be to start homing in on the role of these genes in adaptation, says Fuse, adding that he hopes that the project, despite its limitations, will continue well into the future. “Dark-fly is a kind of heritage,” he says. “It’s special.”