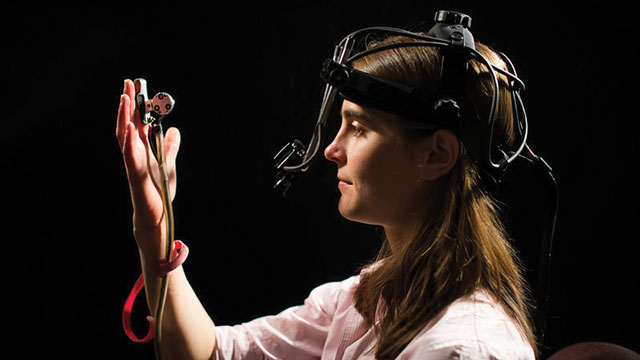 Nearly 10 years ago, Vanderbilt University cognitive neuroscientist Randolph Blake and his postdoc Duje Tadin needed to give their study participants the experience of complete darkness. They were testing their new transcranial magnetic stimulator (TMS) and developing protocols for a series of experiments involving the generation of phosphenes—light experienced by subjects when there is none. So the researchers ordered high-end blindfolds, designed to block all light from reaching the eyes.

When the blindfolds arrived, Blake tried one out. “I can’t remember what prompted me to do it, but on a lark, I put them on myself first and waved my hand in front of my eyes,” he recalls, “and had this faint sense that I could see my hand moving.”

Tadin then tried it and had the same experience. The two replicated the mini experiment in the TMS lab, a small, dark room on the sixth floor. And again,...

The duo traipsed around the building eagerly blindfolding their colleagues and asking them to report what they saw. “About half reported seeing something,” Blake says.

To test what was happening, however, the researchers knew they needed to come up with a better way to characterize what people were actually seeing. “What we discovered was an inherently subjective experience,” says Tadin. “There’s no easy way to ascertain that I’m telling the truth.” Unable to think of a reasonable way to measure the phenomenon, they set the project aside.

A few years later, running his own lab at the University of Rochester, Tadin told the story to graduate student Kevin Dieter, who encouraged Tadin to give the project another shot. They devised a conservative experimental setup in which they attempted to control the subjects’ expectations: they told study participants that one blindfold had little, imperceptible holes that might allow them to see through, while another blindfold would successfully keep out all light. (Both blindfolds were, in fact, totally lightproof.) A subject’s experience with the first blindfold could then guide his expectations for a second trial using the other blindfold. Specifically, if he had seen something with the first blindfold, he would certainly not expect to see anything with the second one. But even under these conditions, nearly 50 percent of subjects reported having at least a “visual sensation of motion” while wearing the second blindfold.

The results hold “implications for how our different sensory systems work together,” Tadin says. Dealing only with subjective reports, however, still made him uneasy. So he turned to an eye-tracking device—used without the blindfolds but in complete darkness—to detect the movement of subjects’ eyes as they viewed the hand they reported seeing. People cannot move their eyes smoothly unless they have a visual target to lock on to, Tadin explains. If they just thought they saw their hand, jerky eye movements should reveal the truth.

“There are examples where stimulating one sense changes what you experience in another sense,” says experimental psychologist Charles Spence, director of the Crossmodal Research Laboratory at the University of Oxford, who was not involved in the research. “This is a stronger example of that—doing something in one sense conjures up something out of nowhere in another sense.”

Interestingly, people with synesthesia—who often see letters of the alphabet, numbers, or days of the week in specific colors, or associate particular sounds with visual stimuli—tended to score higher on Tadin’s blindfold experiment in terms of how much they saw. “They were literally off the chart,” he says. One synesthete produced such smooth eye movements that Tadin at first thought the data were erroneous: “Her smooth eye movements were almost perfect.” Research has suggested that synesthetes exhibit higher levels of cross-brain connectivity, which may play a role in the generation of the visual perception as a result of the kinesthetic input.

Regardless of the underlying neural mechanism, Tadin suspects that there are likely other examples of how the senses blend together—in synesthetes and in people with normal sensory experiences. In 2005, for example, when Norimichi Kitagawa at NTT Communication Science Laboratories in Japan and his colleagues recorded the sounds generated inside the ear of a dummy head by brushing the outside of the ear with a paintbrush, then played those sounds to participants who received no ear strokes, many reported feeling a tickling sensation (Japanese Journal of Psychonomic Science, 24:121-22, 2005). “This phenomenon [of ‘seeing’ one’s own movements] may be just the tip of the iceberg,” Tadin says.