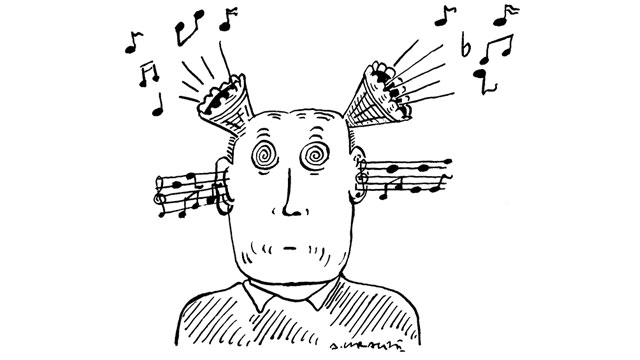 The first time Sven Vanneste, who studies tinnitus at the University of Texas at Dallas, encountered a patient with musical hallucinations, he noticed on her chart that it was her birthday. “Happy birthday,” he told her at the start of their visit, not knowing yet that “Happy Birthday” was the very song she was hearing over and over again in her head.

“Happy Birthday” is not a lovely song by any stretch, and the prospect of having it repeated ad infinitum is maddening. It’s no wonder, then, that musical hallucinations—typically incurable and chronic—can be so distressing. Such hallucinations, rare phenomena affecting one to three percent of people who seek treatment for tinnitus, are the perception that music is playing outside the body (as opposed to getting a song stuck in your head, colloquially an “earworm,” which you don’t perceive as having an external source). Recent studies of...

The human brain routinely fills in missing bits of information to form the perception of patterns—even when no such patterns exist. We may see a cat crouched on the sidewalk, when in reality it is the shadow of a mailbox. Or we think we hear our name, when it is only someone calling out for another. “The brain doesn’t like to have holes,” says Josef Rauschecker, a tinnitus researcher at Georgetown University.

Auditory hallucinations, however, are formed out of whole cloth. The brain doesn’t mistake one thing for another, it invents the perceived stimulus altogether. But our brains’ pattern-making tendencies may also underlie the formation of these phantom stimuli.

Vanneste prefers the term “musical hallucinosis” to describe the condition. Unlike people with schizophrenia, who are commonly convinced that their visual and auditory hallucinations are real, patients with hallucinosis are generally aware that the music is not really being played outside their heads, and the condition is typically not indicative of any deeper psychoses. Another clear distinction—and one that offered an early clue to the origins of musical hallucinosis—is that nearly all those who suffer from it have moderate to severe hearing loss.

Vanneste seeks to understand how, on a neural basis, musical hallucinations are different from tinnitus, which is the perception of phantom tones, buzzing, or hissing. He and his colleagues collected EEG recordings from 30 people: 10 with tinnitus, 10 with musical hallucinosis, and 10 normal participants. Perhaps not surprisingly, patients who perceived phantom sounds always had hyperactivity in the auditory cortex. But compared to patients with tinnitus, people with musical hallucinosis showed additional increases in activity in several brain regions, including those related to language and music (NeuroImage, 82:373–83, 2013).

Another region with increased activity was the dorsal anterior cingulate cortex—a gherkin-size chunk of brain residing a few centimeters behind the forehead—which is associated with filling in missing auditory information and with conscious perception. “One of the models [for musical hallucinosis] is that your brain is compensating for the hearing loss” by producing stimuli, says Vanneste. Because auditory stimuli are weakened by partial deafness, the brain fills in blanks with auditory memories. But why it’s music in particular, instead of barking dogs or lawn mowers, “we don’t know,” he says.

More recently, Timothy Griffiths, a neurologist at Newcastle University in the U.K., came across a patient with an interesting observation about her own musical hallucinations. For her, hearing actual music seemed to tamp down the phantom melody. Griffiths and his colleagues took advantage of this opportunity to manipulate the intensity of her hallucination—a snippet of the Gilbert and Sullivan operetta H.M.S. Pinafore—by playing Bach. They recorded her brain activity using magnetoencephalography (MEG) with and without the real music playing.

Periods when the musical hallucination was most intense correlated with increased activity in a number of brain regions, notably the anterior superior temporal gyrus—thought to be involved in melody perception—and the posteromedial cortex, which may be involved in the retrieval of musical memories (Cortex, 52:86-97, 2014). “What we think this might represent is a form of melody retrieval that’s acting on the abnormal perception” due to the hearing loss, Griffiths says. He suspects that the two regions’ malfunctioning contributes to, firstly, an invented sound, and secondly, a lack of inhibition of that sound. The brain wasn’t receiving enough corrective sensory input to offset the invented perception and thus halt its processing into what the patient perceived as a real sound, Griffiths explains.

One of the reasons why the memory retrieved by that imprecise signal is music, Griffiths supposes, is because “music is something which is very familiar and predictable and overlearned.”

In the book Musicophilia, author and neurologist Oliver Sacks proposes the same idea: that musical hallucinations occur when the brain—to make up for missing auditory pieces—masks the silence of hearing loss with melodies. He explains how the human brain is inherently attracted to music because of its repetitions. Not surprisingly, then, “the balance sometimes shifts too far and our musical sensitivity becomes a vulnerability.”