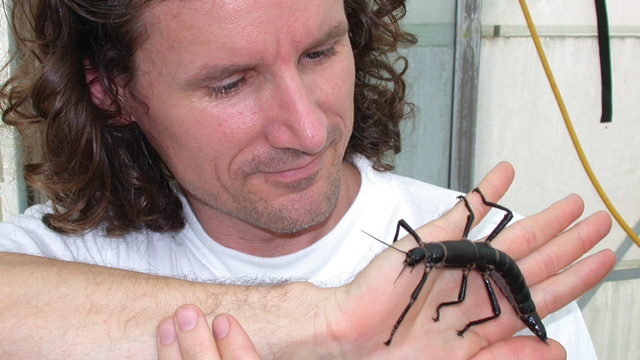 Australian government ecologist Nicholas Carlile was often asked to review requests from outdoors climbers to visit the normally restricted island of Ball’s Pyramid off the nation’s east coast. An extremely narrow, 562-meter (1,844-foot) high spire of rock, it is the tallest sea stack in the world and a perfect challenge for ambitious climbers.

Some requests were made under the guise of looking for a phasmid, a stick insect the size of a human hand that went extinct from nearby Lord Howe Island in the early 20th century after a supply ship ran aground and released a swarm of hungry—and prolific—rats. There had been rumored sightings of the insects’ skeletal remains and freshly dead specimens on Ball’s Pyramid, and climbers often claimed they were part of a scientific expedition in search of the lost species.

But Carlile, who specializes in island and seabird ecology for the state of New South Wales (NSW) Office of Environment and Heritage, had his suspicions. “You’d look at the list of people who were in the crew, and there wasn’t a scientist,” he recalls. “We knew this was just a ruse for a climbing troop.” Convinced that the phasmids were extinct—the bare rock of Ball’s Pyramid simply didn’t have the creature’s preferred humid habitat—Carlile and his colleague David Priddel decided they needed to mount their own survey of the island to prove it once and for all. “Then we could tell these people they had no basis for their climbing,” Carlile says.

So he gathered up a small team, planned for 4 years, then set out for Ball’s Pyramid in February 2001. The team carefully leapt from the pitching boat onto the rocky island, then traversed its jagged perimeter while slowly ascending to GanNet Green, the largest patch of vegetation on the island, about 150 meters, or nearly 500 feet, above sea level. Finding no evidence of the Lord Howe phasmid, Carlile and company began to make their way back down to base camp. During the descent, Carlile spotted some old insect excrement near a bush. Large insect excrement. But, hot and out of water, the team continued downward.

After several cups of a tea and a rejuvenating swim, Carlile decided he would return to the bush where he’d spotted the feces that night, when the nocturnal phasmids might be moving about. Just as it got dark, Carlile set out with Lord Howe ranger Dean Hiscox. When they reached the shrubs, they saw an adult female phasmid—the first sighting of the insect in nearly 80 years. “It was such an amazing experience,” Carlile recalls. “I’d not seen such a large invertebrate. [It was] like going back to the Jurassic, when insects ruled the world.”

When he returned home, Carlile contacted entomologist Patrick Honan at the Melbourne Zoo about starting a breeding program. After 2 years—“both to overcome the logistics of moving invertebrates as carry-on luggage that people weren’t allowed to open up, as well as dealing with the bureaucracy of wanting to collect what is potentially the rarest invertebrate in the world,” Carlile says—government approval was granted and Carlile returned to Ball’s Pyramid to collect four individuals; two males and two females. One pair went to Honan, while the other went to NSW entomologist Stephen Fellenberg, who had bred other species of phasmids. But starting a breeding program was easier said than done, Honan writes in an e-mail. “We knew almost nothing of their biology, let alone their husbandry.” Determined to make it work, he stayed with the phasmids every night for the first month. “With only one [pair], and little chance of collecting another, we have to make sure [to get it right the] first time,” says Honan, now a manager of live exhibits at the Melbourne Museum. Today, the captive population is thriving with more than 500 individuals, and Honan and his successor at the Zoo, Rohan Cleave, have sent phasmids to other institutions to start their own colonies. In total, there are more than 1,000 adults and 20,000 eggs now in captivity all over the world, Carlile says.

Studying the phasmids has revealed “an enormous amount about a highly unusual species, whose behavior, morphology, ecology, and reproductive strategy is unlike just about anything else,” says Honan. Eventually, Carlile and his colleagues hope to use the captive-bred phasmids to repopulate Lord Howe. “The phasmid was the major consumer of vegetation on the island, and therefore a key component in the ecosystem in terms of turning over nutrients,” Carlile explains.

The Lord Howe phasmid is “a really important case study in terms of rearing and reintroduction,” says Aaron Dossey, an entomology postdoc at the United States Department of Agriculture’s Agricultural Research Service and the founder and owner of All Things Bugs, a company that promotes the use of insects as a human food source. But before the phasmids can be reintroduced, the rodents that drove them off the island in the first place must be eradicated. The project, which is slated to start later this year, will take some $10 million and 3 years to complete.

“This is an enormous task and has been in the planning stages for about 7 years,” Honan says. “It would be one of the biggest and certainly the most complicated eradication project ever.”

Once the rats are gone, Carlile will begin reintroducing the phasmid, as well as a biological control, such as an owl species, to avoid overpopulation by the phasmid. “It’s part of the rebuilding of the ecology of the island,” Carlile says. “You’ve got to deal with a number of components to get the pieces to fall back into place.” 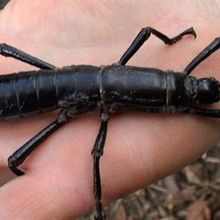