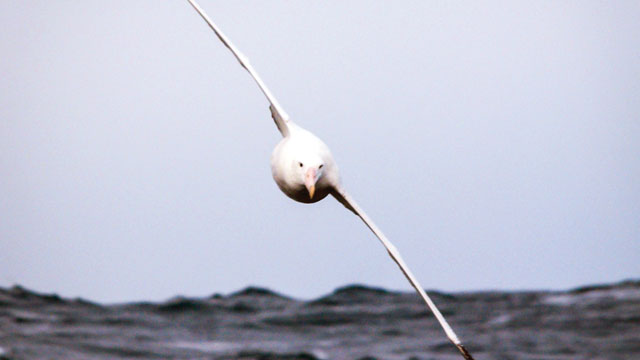 THE WANDERER: An albatross in effortless flightCOURTESY OF PHIL RICHARDSON

Albatrosses, the largest birds able to achieve sustained flight, can soar thousands of kilometers through horrendous winds, all without flapping their wings. “It’s quite impressive to see—even with the strongest winds that you might see out in the ocean, you’re wondering if you’re going to survive, and the albatrosses just seem to be gliding by at ease,” says Rob Suryan, a seabird researcher at Oregon State University.

The birds manage flapless flight through a looping maneuver called dynamic soaring. Lord Rayleigh—Nobel Prize–winning physicist and discoverer of argon—first proposed an explanation of the mechanism in a letter to Nature in 1883. Albatrosses, he wrote, take advantage of a vertical gradient in wind velocity to gain energy. Wind speed is typically slowest near the ocean’s surface and accelerates as altitude increases until about 10 to 20 meters above the water....

It sounds simple enough, and in fact, albatrosses do fly in these arc patterns, but “it’s a rather complicated flight maneuver,” says Gottfried Sachs, an aeronautical engineer now retired from Technische Universität München. Albatrosses trace giant, three-dimensional S-curves. The birds bank with their beaks into the wind, say, to the left, and rise up above the water where the wind speed continuously picks up. They then bank right at the top of this path to slide down toward the ocean with the wind at their backs. At the bottom of the loop, near the surface of the sea, the birds turn again windward and repeat the maneuver—over and over and over. While dynamic soaring is pretty much agreed upon now as the mode of transport among albatrosses, only with the evolution of GPS trackers light enough to attach to the feathers of these long-distance flyers have scientists been able to capture empirical data and figure out how the birds gain energy during dynamic soaring.

The wandering albatross, Diomedea exulans, has a wingspan of three meters. While not the only bird to fly using dynamic soaring, it is “by far the biggest,” says Suryan. A sheet of tendon in the wing locks it in place, acting like a strut, when the wing is fully extended, a trick that spares the bird muscle energy for keeping its wings outstretched during flight. Several years ago, Sachs’s colleagues traveled to the Kerguelen Islands in the Indian Ocean to affix GPS loggers to 20 wandering albatrosses. The process involved leaping on a bird that was sitting on a nest, grabbing it by the beak, and sticking the device to its back with tape and glue. The birds then left the islands for weeks at a time. Sixteen returned with their GPS trackers still attached.

Using the data retrieved from the units, Sachs and his team determined that the birds get the most energy gain during their dynamic soaring at the top of the loop, just as they are making the turn from flying into the wind to flying with the wind. “By turning [to fly] with the wind they gain this speed, which they direct into the intended flight direction,” says Anders Hedenström, an animal-flight researcher at Lund University in Sweden. “I think [Sachs and his group] are quite close to the truth” in explaining how the birds extract energy from the movements of the air, he adds.

It’s quite impressive to see—even with the strongest winds that you might see out in the ocean, you’re wondering if you’re going to survive, and the albatrosses just seem to be gliding by at ease.—­Rob Suryan, Oregon State University

Phil Richardson, an oceanographer at Woods Hole Oceanographic Institution, disagrees. Having spent time piloting gliders and worrying about maneuverability, “you have to pay attention to airspeed,” he says. Richardson says that Sachs’s data focus on the birds’ ground speed, which decreases as the birds swoop upward against the wind. Airspeed, on the other hand, is the speed of the bird relative to the air around it. “If you look at things through the airspeed viewpoint you get very different answers than what Sachs gets.”

Richardson has done his own theoretical analysis of albatross flight, and he finds that the birds gain the most energy during dynamic soaring as they are climbing out of lower elevations with reduced wind speeds and into the upper part of the arc where the wind is stronger. As the bird flies close to the water where there is little wind, his airspeed is low. But as the bird swoops up into the upper part of his trajectory where the wind is stronger, and he therefore experiences a greater airspeed, “he gains energy,” Richardson says. Then, as the bird descends down the loop with the wind, his speed relative to the air around him declines. Suryan agrees that airspeed is important, and says both models likely hold clues about how albatrosses extract energy during dynamic soaring.

Albatrosses offer an appealing template for building planes that could seize upon this “free” energy, and a few groups have taken an interest in trying to develop one. The applications, of course, would be limited by the fact that anyone riding in the aircraft would be subjected to the nauseating cycles of dynamic soaring. Even if it would be possible for large aircraft to take advantage of the winds, “which may be not the case,” says Sachs, “you cannot expose passengers to such dynamic maneuvers.” Unmanned vehicles might be a better target.