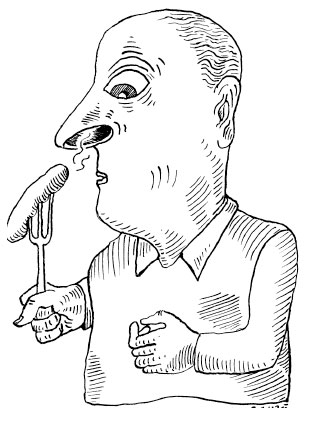 ANDRZEJ KRAUZEThe season to chow down at parties, surrounded by delicious smells, is behind us. But a leftover candy cane can give you a surprising peek into how the human brain helps process those delectable flavors.

Take a deep breath and pinch your nose shut. Bite into the candy as you hold your breath, and then breathe out. Experience how the minty flavor only emerges when you exhale—not when you take that first bite.

When you chew, volatile compounds are released in the mouth and, upon exhaling, carried up into the back of the nose. Here, they bind to odor receptors, which send a signal to the brain. Combined with sensory input from taste buds, and sensations of temperature and texture from other receptors, that back-of-the-nose smell, known as retronasal olfaction, creates what we perceive as flavor.

To understand precisely how smell and taste come together to create flavor, Shepherd turned to colleagues, some of whom specialize in studying the flow patterns of fluids on airplane wings, and others who work with 3-D printing.

Together, the researchers created a 3-D model of the inner surfaces of the throat and mouth of an adult woman. They found that when air flowed in through the nose, the anatomical structure of the pharynx created a “curtain” of air that separated the back of the mouth from the throat, preventing air from the mouth from entering the lungs. But when air flowed out through the nose, it swept up into the space at the back of the mouth. If volatile molecules from food were in the mouth, this exhaling breath caused them to be preferentially blown up into the back of the nose, enabling retronasal smell (PNAS, 112:14700-04, 2015).

“It seems so obvious now, but we didn’t know how this happens,” Shepherd explains. “We didn’t have any mechanistic evidence of how volatiles from the mouth reach the nose.”

The opposite of retronasal smelling—known as orthonasal olfaction—is much more familiar. It’s what we do when we sniff a perfume or turn our heads away from a pile of trash. Sniffing in through the nostrils to smell is reflexive, but we rarely think of the fragrances of food wafting up the back of our mouths and into our noses. And studies have revealed that smells sensed in these different ways are also processed differently by the brain.

In 2005, researchers tested how volunteers responded to the smell of chocolate, lavender, or a 4- or 23-carbon alcohol when the odors were delivered to their noses or the back of the mouth via fine tubes. A smell administered retronasally activated different brain regions than one delivered orthonasally. Both kinds of smell activate the insular cortex, but a retronasal food smell is also likely to activate regions that trigger mouth movements and chewing, according to Thomas Hummel of the Dresden University of Technology in Germany, a coauthor of the 2005 paper. Moreover, smells delivered via the mouth were also processed differently: the smell of chocolate activated different brain regions than a non-food smell such as lavender (Neuron, 47:593-605, 2005).

A physician by training, Hummel sees approximately 20 patients a week who suffer from disorders of smell and taste. In the clinic, he noticed that many patients who complained of being unable to taste foods had actually lost their sense of retronasal smell.

Neuroanatomy researcher Johannes Frasnelli of the University of Montreal in Canada also studies how olfaction changes with illness or injury. In a meta-analysis of patients with Parkinson’s disease, he and his colleagues reported that the loss of smell was often one of the earliest observable signs—preceding even clinical disease symptoms (Mov Disord, 19:1196-1202, 2004).

Hummel, Frasnelli, and others have reported that conditions ranging from traumatic brain injury to nasal polyps can alter olfaction. Some disorders affect retronasal perception more than orthonasal, and several drugs can alter patients’ sense of smell and taste.

“I think it’s always a bit forgotten. Many people on certain types of chemotherapy suffer olfactory loss and also taste loss,” says Hummel. “For patients, it’s a real problem. When you don’t want to swallow what’s in your mouth there’s a high risk of ending up more sick or malnourished.”

Although researchers are uncovering the ways in which drugs and disease influence retronasal olfaction, little is known about how to fix a faulty sense of flavor.

The anatomical structures that Shepherd and his coauthors created in their 3-D–printed model have 260-million-year-old counterparts in the earliest mammalian ancestors. In June 2015, Shepherd and paleontologist Timothy Rowe of the University of Texas at Austin compared the skulls of extinct cynodonts and other mammalian ancestors, and found that early brain development was driven by the expansion of the olfactory cortex. Beginning as a simple membrane in our ancestors, the palate that separates the nose from the roof of the mouth resulted in the anatomy needed for retronasal olfaction. Diaphragmatic breathing—which allows the exhaling breath to waft volatiles upward—was another key player (J Comp Neurol, doi:10.1002/cne.23802, 2015).

“It looks as though many of the morphological features that empower retronasal smell, and this duality of olfaction, arose in ancestral cynodonts, which include ancient mammals and their extinct relatives,” says Rowe.

In humans, the ability to experience retronasal odors may be particularly powerful. Because the back of the mouth is closer to the nasal cavity in humans than in most other animals, it suggests humans are particularly adapted for retronasal smell in order to sense flavor, according to Shepherd.

While a simple sniff may not always reveal if something is edible, detecting flavors created by retronasal odors can assist.  It’s a skill that may have helped our ancestors gain a survival advantage. Now, simply remembering to exhale as you dig into holiday leftovers could make them tastier—or tell you when it’s time to toss that casserole.