Nearly 5,000 years ago, Egyptian physician Imhotep observed a grotesque but revealing detail about tumors: some grew so large that they burst open—and eventually disappeared. Seeing this happen, ancient texts suggest, he developed a radical cancer treatment: pierce patients’ tumors and then wait to see if they got smaller, cancer researcher Andrew Zloza of Rush University Medical Center in Chicago tells The Scientist. Sometimes they did.

With no knowledge of the human immune system, Imhotep had hit on an essential connection between tumors and infections that wouldn’t appear again in the scientific literature until the turn of the 20th century, when bone surgeon and cancer researcher William Coley began injecting live bacteria and later bacterial toxins into individuals with sarcoma. Although Coley’s technique showed some success in treating patients’ cancer, it was quickly abandoned in favor of emerging chemo-therapy and radiation therapy, Zloza says.

Imhotep devel­oped a radical cancer treatment: pierce patients’ tumors and then wait to see if they got smaller.

Now, as immunotherapy captures cancer researchers’ attention, Zloza and others have begun to recognize that Imhotep and Coley might have been onto a major breakthrough in immunotherapy: they were using infections to kick-start cancer patients’ own immune systems to target and kill their tumors. Zloza and his colleagues recently added to the evidence for this approach with a study of tumor-bearing mice treated with the seasonal flu vaccine: injecting the vaccine, which consists of inactivated flu viruses, directly into mice’s skin tumors dramatically slowed the growth of tumors and in some cases reduced their size, the researchers reported in January in PNAS.

“Having this fairly bland vaccine have such a profound effect on tumor immunity is super surprising,” says Thomas Kupper, a dermatologist who studies skin tumor treatments at Dana-Farber Cancer Institute in Boston and was not involved in the study. If the results hold up in human clinical trials, he says, it could offer an innovative way to target certain types of tumors that have been exceedingly tricky to treat, as well as cancer cells that are on the move to other parts of the body.

Zloza and his team were focusing on just those sorts of difficult-to-treat tumors, known as cold tumors because they don’t have many immune cells infiltrating them.Compared to other tumors, in cold tumors there are fewer chances for the immune system to identify the presence of cancer cells that differ from normal cells in the body, and any immune cells that are present tend to suppress rather than activate the immune system.

The researchers suspect that the injection of flu-associated proteins into the mouse skin tumors signaled to the mice’s innate immune system that foreign material had entered the body. The resulting immune response, the scientists hypothesized, converts cold tumors to hot ones. Consistent with this idea, the team found that the treatment only worked when flu proteins were injected directly into the skin tumors. Injecting the live influenza virus into the tumors did not affect the cancerous cells, probably because the virus is unable to replicate and produce viral proteins in these cells, the researchers suggested in their paper. Injecting heat-inactivated virus or viral proteins outside of the tumor—into the mice’s muscles, for example—didn’t affect the tumors, either.

When the team injected the flu vaccine into the tumors, dendritic cells, the foot soldiers of the innate immune system, swarmed the cancerous cells. Those dendritic cells began to pick up bits of the flu virus called pathogen-associated molecular patterns (PAMPs), which help trigger an immune response, and to engulf bits of the tumors. When the dendritic cells present viral and tumor antigens on their surfaces to attract T cells, they may trigger attacks on both the flu and the cancer cells. “We haven’t proved this yet, but we think what happens . . . is that you turn the tumor microenvironment into an immune hotbed, and so the antitumor response is aided in that way,” Zloza says.

The team detected an increase in killer T cells carrying receptors for a specific tumor antigen, suggesting that those cells had indeed been primed to target tumor cells. The researchers also showed that when a mouse had two tumors, both the treated and untreated tumors, grew more slowly after the flu shot injection compared with tumors in untreated mice. “That would mean you elicited an adaptive immune response that’s specific to the tumor itself,” and that the anti-cancer T cells circulate through the body primed to kill, says immunologist David Masopust of the University of Minnesota who was not involved in the study. “That would be important in the setting where the tumor has metastasized, which is often the case.”

To see if something similar would happen with human tumors, Zloza’s team implanted human breast cancer cells into mice’s mammary fat pads. As happens in this form of human cancer, the fatty tissue tumors metastasized to the mice’s lungs. Just as the team had found when working with mouse tumors, a flu shot into the primary tumor in the fat pad led to reduced growth of both that tumor and any metastatic lung tumors that had started to form.

However, there’s an important difference between mice and humans that intrigues both Zloza and Masopust. Lab mice have never been exposed to the flu, but humans have, and many get vaccinated every year against it. That means that there could be lingering T cells that are primed to respond to the inactivated virus if it’s injected into humans’ tumors. Masopust and his colleagues have been studying whether they can use this idea to tap the adaptive immune system, harnessing these virus-primed T cells to quickly target the viral proteins once the vaccine is injected into tumors and then spur the immune system to target the tumors too.

Sure enough, in tumor-bearing mice that had T cells primed to remember infection with a particular RNA virus, injecting a peptide from that virus into the tumor did jump-start the mice’s immune system to target the tumor, Masopust and his colleagues reported last year. The result suggests that in humans, memory of a flu virus may actually add to the immune response incited by a viral injection into a tumor.

Kupper notes that the research also shows that clinicians could use viral immunotherapy to boost the effectiveness of another form of cancer treatment, checkpoint inhibitors, which are known to be less effective in cold tumors. “Checkpoint inhibitor therapy, when it works, tends to work in patients with hot tumors, tumors that are already infiltrated with T cells,” Kupper says. There’s a lot of interest in turning cold tumors into hot tumors, and this work on using the flu vaccine is “a good first step towards that.” 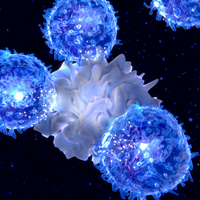