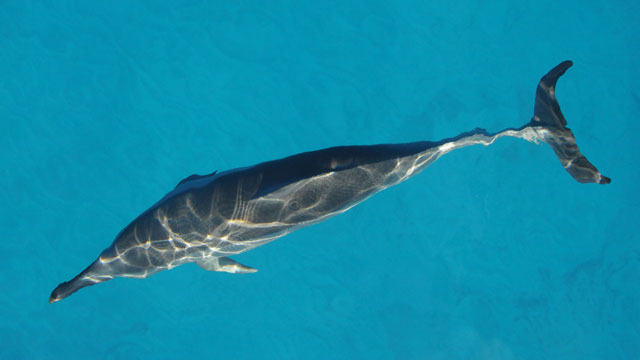 MIGHTY FLIPPERS: Dolphins are able to swim so rapidly by generating large amounts of power from the oscillations of their flukes.COURTESY OF FRANK E. FISH

Writing in the Journal of Experimental Biology in 1936, British zoologist James Gray made a simple calculation based on observations of a dolphin swimming alongside a ship in the Indian Ocean. The dolphin, he reported, had passed the vessel, from stern to bow, in 7 seconds. The ship was 41 meters long and it was moving at 8.5 knots. “This dolphin must therefore have been travelling at 20 knots [10.1 meters per second],” wrote Gray, who concluded, after an avalanche of more complex calculations, that dolphins couldn’t possibly have attained that speed using muscle power alone.

In an attempt to resolve the quandary, which became known as “Gray’s paradox,” he suggested that dolphins must use some trick of fluid dynamics to overcome drag,...

Frank Fish, a biologist at West Chester University in Pennsylvania who studies the biomechanics of aquatic mammals, read such tales with interest. “To resolve the paradox was to assume that flow over the dolphin’s body is laminar, meaning that the particles all move parallel to one another and to the skin, when everything said it would be turbulent,” says Fish. “The argument brought forth ideas that the dolphin has some adaptations in the skin to smooth out the flow.”

But Fish was never convinced. Instead, he believed that dolphins’ muscular tails and flexible, wing-like flukes produce ample propulsive force to swim as fast as they do, without the need for any enigmatic hydrodynamic adaptation.

In 1993, Fish used a hydrodynamic model to show as much (J Exp Biol, 185:179-93, 1993). But the point was difficult to prove because it was impossible to directly measure the thrust produced by free-swimming dolphins. For small fish, researchers use a method called digital particle image velocimetry (DPIV). A tank is filled with water and glass microbeads, a thin layer of which is illuminated with a sheet-like laser beam. Using a high-speed video camera to film how the beads move as the fish swims through, researchers can visualize the jets and vortices its motion creates. Then, once the footage is separated into successive frames and digitized, the investigators apply an algorithm to figure out the propulsive forces generated. The problem is, says Fish, “there’s no chance anyone would let you throw in glass beads and shine laser beams at dolphins. It’s way too risky.” 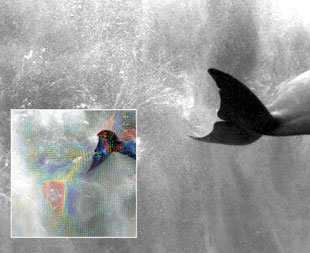 WHAT A WAKE: As a dolphin swims through a bubble curtain, its powerful fluke generates vortices (inset) that can be filmed and analyzed using digital particle image velocimetry.COURTESY OF FRANK E. FISH; TIM WEI (INSET IMAGE)Fish was stuck. But then he met Timothy Wei at an informal hydrodynamics meeting at Princeton University in 2005. Wei, now an engineer at the University of Nebraska, had been measuring the propulsive power of Olympic swimmers by asking them to swim through a curtain of air bubbles. “It was perfect,” says Fish. The bubbles reflect light, so no lasers are required, and there is no need to worry about swallowing air bubbles. “All we needed now were the dolphins,” Fish adds. So he called up longtime friend and collaborator Terrie Williams, an animal physiologist at the University of California, Santa Cruz (UCSC), who works with two captive bottlenose dolphins named Primo and Puka.

The team laid 6 meters of fine-pored garden-soaker hose in a straight line along the floor of a large outdoor pool at UCSC’s Long Marine Laboratory and hooked it up to a SCUBA tank of compressed air to generate bubbles. The group filmed the bubbles as Primo and Puka, after some gentle persuasion from their trainers, swam through the 2-cm-wide bubble curtain, churning up the bubbles with their flukes as they went. “The hardest thing was to get them to stop investigating the bubbles or us,” says Fish. “They’re very curious animals.”

After processing the data with DPIV software, Wei and Fish worked out that the dolphins generated up to 2,380 watts, or 3.2 horsepower, of thrust when swimming steadily at 3.4 meters per second and up to a whopping 5,400 watts, or 7.2 horsepower, when accelerating from rest (J Exp Biol, 217:252-60, 2014). Fish also calculated that “the dolphins were actually incurring a heavy drag load, suggesting they don’t have any special drag-reduction tricks.” Just as he’d thought, dolphins generate enough power to overcome their drag. “So the idea of Gray’s paradox, in which the dolphin doesn’t have enough muscle to maintain a high speed, falls apart.”

Ann Pabst, an animal physiologist at the University of North Carolina Wilmington who was not involved in the work, is impressed by the authors’ strategy. “[They] figured out a very clever method to tap into the power of DPIV . . . but to do so in a way that was safe for these protected animals,” she told The Scientist in an e-mail. “Replacing lasers and neutrally buoyant particles with sunlight and air bubbles was ingenious.” The study, says Pabst, “will be the final nail in the lid [for Gray’s paradox].”

And because it appears that dolphins incur high levels of drag, the idea that their skin holds the secret to achieving laminar flow looks like a red herring. “We should certainly stop looking for special fluid dynamics–based trickery in the flow over swimming dolphins,” says Harvard biologist George Lauder, who studies fish hydrodynamics but was not part of the study. “There is no more trickery there than is present over the body of any swimming fish.”