ABOVE: A wildfire swept through the Great Smoky Mountains National Park in late 2016.
© KAREN HUGHES

After the Chimney Tops 2 Wildfire charred 11,000 acres of the Great Smoky Mountains National Park along the North Carolina–Tennessee state line in November 2016, rangers closed affected trails to visitors. Mycologists Andy N. Miller and Karen Hughes and their teams were an exception. Toting hard hats and sample collection kits, these scientists jumped at the opportunity to track down their research subjects: pyrophilous (“fire-loving”) fungi, which produce mushrooms prolifically after forest fires and then disappear as the forest recovers.

The level of destruction was incredible. Everything I touched left black carbon on my hands.

The severely burned areas of the Smokies were almost completely lifeless two months after the blaze, when the group first ventured into the affected zone. “The level of destruction was incredible,” recounts Hughes, a researcher at the University of Tennessee, Knoxville, in an email to The Scientist. “Everything I touched left black carbon on my hands. It was incredibly quiet.” Miller, who is based at the University of Illinois Urbana-Champaign, also noted a surreal lack of activity. “There’s nothing running around, no birds singing,” he says. To him, the site smelled “like a house had burned up.” When the researchers returned to their collection sites a few months later, however, their mushrooms of interest had risen from the ashes. Miller noticed that when these fungi surface, they do so en masse: “They’re less than a millimeter in diameter, but there’s a lot of them, and once you train your eyes, they’re just all over the place.”

The researchers were interested in documenting which species of pyrophilous fungi are present in the Smokies. They also wanted to test a theory about where the fungi go during the long periods between forest fires. Some fire-loving fungi are known to lie dormant in the dirt as spores or other heat-tolerant structures until post-fire soil conditions trigger growth and reproduction. Other species exist between burns in a vegetative state, aiding decomposition of dead organisms or interacting with tree roots. But many fire-loving fungi don’t fit into any of these categories. A new proposal, known as the body snatchers hypothesis, posits that some pyrophilous fungi hide out inside plants or lichens in between fires, nestling among host cells in a so-called endophytic or endolichenic state.

To test the hypothesis, the researchers traveled to the burn site every few months for more than a year to sample the soil, as well as the mosses and lichens that sprang up while the forest recovered. They also gathered specimens from unburned areas of the park for comparison. In May 2018, members of Miller’s lab began analyzing the samples they’d collected. DNA sequencing results identified a total of 22 pyrophilous fungal species in the Smokies. Of these, three species were present only in the soil, while the remaining 19 were found inside plant samples from burned and unburned areas, either exclusively or in addition to being found in the soil. In line with the body snatchers hypothesis, “almost all of our pyrophilous fungi were found as endophytes,” Miller says. 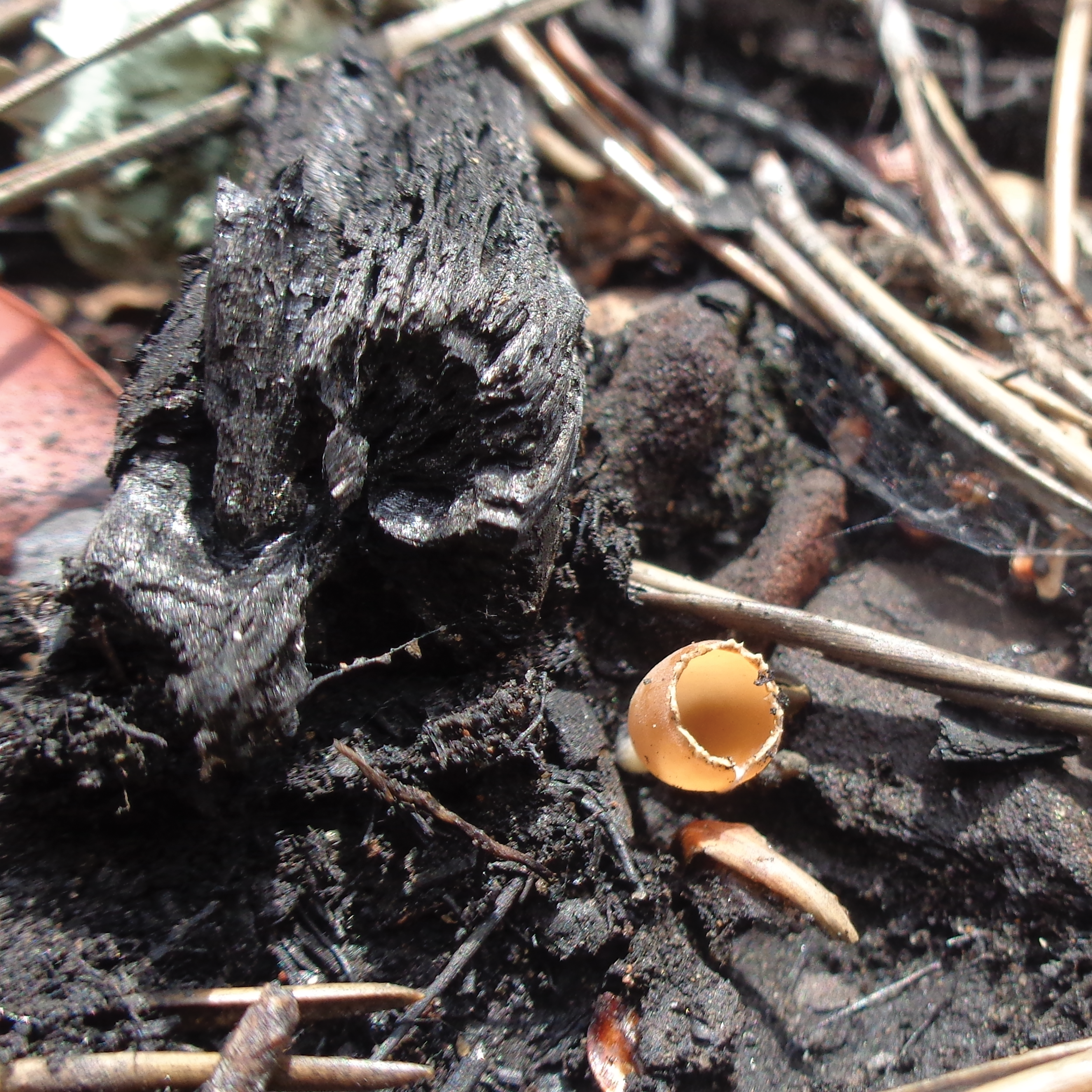 Mosses and lichens often live in difficult-to-reach places such as rock crevices and may be hardy enough to withstand minor flames, so fungi living inside these hosts could theoretically survive a low-intensity wildfire. But it’s still unclear how all of these organisms might persist through a moderate or severe burn, and how a fire-loving fungus would escape its host to recolonize a charred forest. Hughes has a hypothesis based on her observations at the burn site: “After the fire, I saw numerous tiny lichen fragments on the burned soil, as if they had been lofted into the air while trees were burning and settled on the ground after the fire,” she says. These burned plant fragments may inoculate the soil with the fungi they harbor, giving the fire-loving fungi a way into the dirt.

This is a feasible way for both a pyrophilous fungus and its host to rebound after a fire and maintain their relationship, according to Keith Clay, who studies plant-fungus interactions at Tulane University and was not involved with this study. “If [a moss fragment] lands in a good place, it can regenerate the whole plant,” says Clay. “If the endophyte is in that fragment, presumably it can just colonize these newly grown plants as well from the get-go.” Post-fire fungi may also acquire new hosts after a burn, Miller notes. One mushroom can produce millions of airborne spores that likely land on nearby mosses and lichens, germinate, and invade the tissues of these new hosts, he says.

To check whether their findings might apply to other forests, Miller and Hughes analyzed moss and lichen samples from other sites around the US. A handful of the fire-loving fungi identified in the Smokies were also present as endophytes in Indiana and Alaska. That result was surprising because “there was really no evidence that a fire had occurred in the last few years in those areas,” Miller says. “What are they doing there if they’re not waiting for a fire to come along?”

One possibility is that, while body snatching between fires, pyrophilous fungi use their plant hosts as nutrient sources, says Clay. He notes that many plants and fungi have mutualistic endophytic relationships, where the plant typically provides the fungus with “a home where they can live and sugars, carbon, from photosynthesis.” In return, the fungus often produces alkaloids that benefit the host. Yet for the pyrophilous fungi examined in this study, Clay says, “what they offer the plant is not clear.” Sydney Glassman, a microbial ecologist at the University of California, Riverside, who was not involved with the study, notes that in vitro assays using carbon isotopes could help uncover these trade-offs by revealing “nutrient transfer between the plants and the fungus.”

Miller and his team plan to examine the details of fungus-host interactions by recreating body snatching in the lab and conducting long-term field studies, he notes. After all, many forests where pyrophilous fungi live go for decades without fire, he says. “So how is that relationship maintained?”

Annie Greene is freelance science and nature writer based in Washington, DC. Find her on Twitter at @ScienceGreene.