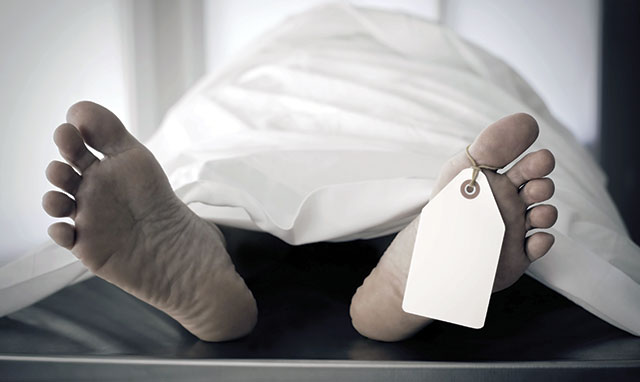 In April 2009, epidemiologist Marc Weisskopf of the Harvard T.H. Chan School of Public Health and colleagues came across a puzzling correlation as they were looking for links between the neurodegenerative disease known as amyotrophic lateral sclerosis (ALS) and exposure to 11 different chemical classes. They analyzed mortality data from a sample of more than 1 million people involved in the American Cancer Society’s Cancer Prevention Study II. While the researchers found little evidence of a link between ALS and most of the chemicals they examined, one did raise a red flag: formaldehyde, a compound commonly used in funeral homes and medical laboratories. Those participants who reported being regularly exposed to the chemical were more than twice as likely to die from ALS, compared to people with no exposures (J Neurol Neurosurg Psychiatry, 80:558-61).

“We started that [study with] an interest in the pesticides and...

Little is known about what causes ALS. Approximately 10 percent of cases are familial, and about 10 percent of those—or 1 percent of all ALS cases—can be attributed to mutations in SOD1, a gene that encodes an enzyme that protects cells from metabolic waste. The origins of the other 99 percent of ALS cases remain a mystery, and researchers were quick to follow up on Weisskopf’s findings regarding formaldehyde as a potential trigger.

We started that study with an interest in the pesticides and herbicides exposures . . . but since we had the information on the other compounds, we looked at them as well.—Marc Weiss­kopf,
Harvard University

Just five months after Weisskopf’s study came out, Freya Kamel, an epidemiologist at the National Institute of Environmental Health Sciences, and colleagues published a new analysis of a case-control study conducted in New England in the mid-1990s. In contrast to Weisskopf’s group, the researchers did not find an association between ALS and formaldehyde exposure, though four individuals with the greatest exposure did appear to be at an increased risk of the disease (Environ Health Perspect, doi:10.1289/ehp.0900580, 2009). More research was clearly needed to determine what role—if any—the chemical might play in ALS pathology.

Four years later, Kamel and her colleagues published another study, this time looking at some 11,000 mid–20th century garment workers, who were often exposed to formaldehyde as it leached off resin-treated fabrics used in permanent press clothing. Again, “we found relatively little evidence for an association,” Kamel says (Amyotroph Lateral Scler Frontotemporal Degener, 14:353-55, 2013).

But the garment workers constituted a relatively small sample, especially if the researchers hoped to find associations with a disease as rare as ALS, which only afflicts a handful among every 100,000 people. Yet again, more data were needed for researchers to make sense of Weisskopf’s original finding.

So Weisskopf and his colleagues turned to the biggest data set they could think of: the National Longitudinal Mortality Study of the US Census Bureau. The researchers analyzed data on nearly 1.5 million people, assigning each person a probability of formaldehyde exposure based on their occupations. And with this mega-dataset, the researchers did indeed find evidence to support a link between the chemical and ALS: men with jobs that gave them a high probability of formaldehyde exposure—in this case, funeral directors, who are exposed to the chemical during the embalming process—had an almost three times greater rate of ALS mortality (J Neurol Neurosurg Psychiatry, doi:10.1136/jnnp-2015-310750, 2015). (There were too few women in jobs assigned a high probability of formaldehyde exposure to evaluate an increased risk of ALS.)

“It’s a nice study,” says Kamel. “This is certainly suggestive that there’s something here that needs to be looked at more carefully. . . . This study keeps the issue open.”

But the story is not cut-and-dried. For one, because both ALS and high levels of formaldehyde exposures are so rare, there were only two men among those assigned to the high probability of exposure group in Weisskopf’s study that died of ALS. “It’s an issue—so few people to base a finding on,” says coauthor Andrea Roberts, an epidemiologist at Harvard’s School of Public Health. “It’s sort of ridiculous to do a study with 1.5 million people and then say you need another study, but unfortunately that’s where you end up.”

All of the men in Weisskopf and Roberts’s high probability group were funeral directors, who deal with numerous chemicals in addition to formaldehyde. “They are exposed to all sorts of other stuff,” Roberts says. “We can’t really point the finger at formaldehyde, even though that was our intention.”

For now, funeral directors should proceed with caution, ensuring proper ventilation in corpse preparation rooms to minimize exposure to formaldehyde, says Jessica Koth, a spokesperson for the National Funeral Directors Association (NFDA). “NFDA will keep its members apprised should more definitive data about the connection between formaldehyde and ALS be published.”