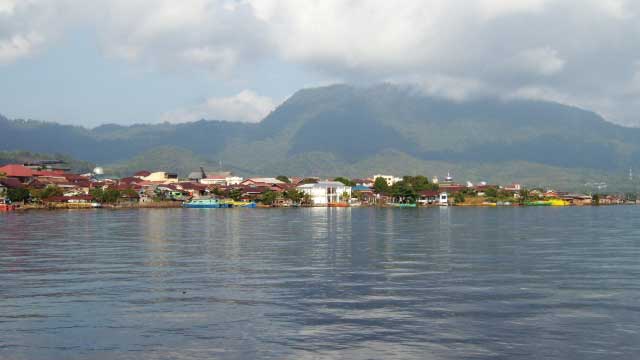 ROLLIN’ IN THE DEEP: A view of the Indonesian village of Sorowako from Julia Maresca’s research vessel floating on iron-rich Lake MatanoJULIA MARESCA

Until 2008, a simple molecule—one carbon flanked by four hydrogens, aka methane—had oceanographers scratching their heads. Methane levels are supersaturated on ocean surfaces, meaning they are higher than expected given atmospheric concentrations. Yet, scientists only knew of methanogenesis in anaerobic archaea deep down on the oxygen-depleted ocean floor. The abundance of methane in oxygen-rich surface waters became known as the “methane paradox,” a curiosity with potential implications for global warming given that the greenhouse gas moves easily from supersaturated water into the atmosphere.

But the source of methane underlying the paradox remained unsolved until David Karl at the University of Hawaii and colleagues discovered that laboratory-grown aerobic marine microbes can break down methylphosphonate and produce methane (Nat Geosci, 1:473-78, 2008). Four years later,...

Numerous freshwater systems also have methane in their upper, oxygen-rich layers, and, like oceanographers, limnologists didn’t know how it got there. Even out in the middle of the Great Lakes, methane is supersaturated, says Paul del Giorgio of the University of Quebec in Montreal. “Very far from anoxic sediments, very far from shore, it’s not obvious where the methane comes from,” he says. Researchers raised a variety of possibilities: perhaps it blows in from anoxic waters near the edges of lakes; maybe there are anoxic micropockets in the upper layers where methanogens can do their thing; or perhaps aerobic microbes are releasing methane like those in the ocean.

Several years ago, Hans-Peter Grossart of the Leibniz-Institute for Fresh-water Ecology and Inland Fisheries in Germany and colleagues produced evidence supporting the third idea: that methane production can occur in oxic lake water. In the laboratory, they incubated water samples from the upper levels of nearby Lake Stechlin, a clear body of water in northwestern Germany that reaches 70 meters deep, and observed methane concentrations increase (PNAS, 108:19657-61, 2011).

“We really had problems to get [the paper] accepted because we were acting against the current paradigm that methane is only produced in anoxic environments,” says Grossart. “We showed there is internal production, but we couldn’t well define the processes. That was the problem.”

Earlier this year, Julia Maresca of the University of Delaware filled in some of the missing pieces of the methane puzzle. She had been studying how microbes obtain phosphorus in an unusual lake in Indonesia. At nearly 600 meters deep, Lake Matano is one of the deepest lakes in the world. It is also rich in iron and poor in phosphorus. Maresca thought it might be possible that, to get the phosphorus they need, bacteria there break down methylphosphonate just like microbes do in oxic ocean waters.

To find out, she and her colleagues motored for more than an hour to the middle of the clear, blue lake and collected water samples from 10 meters below the surface. They froze the samples in a kitchen-turned-laboratory at a house in a nearby mining town and then brought them back to the U.S. for meta-genomic analyses. Genes coding for enzymes responsible for producing phosphate and methane from methylphosphonate popped up in the results (Appl Environ Microbiol, doi:10.1128/AEM.02399-16, 2016). “What we saw was that pathways for phosphonate degradation seemed to be pretty enriched,” says Maresca.

Her team took a closer look at one gene in particular, phnJ, which is responsible for cutting the carbon-phosphorus bond and finally releasing methane. The Alphaproteobacteria, Gammaproteobacteria, and Actinobacteria Maresca’s group isolated from Lake Matano express phnJ when methylphosphonate is present and produce methane as long as phosphate isn’t around. Presumably, the microbes do not need this pathway if phosphate is abundant.

Maresca’s group also found homologs of phnJ present in numerous other metagenomic data sets from freshwater systems, including Lake Stechlin. “This might be a pretty common mechanism,” she says.

One outstanding question is how much this mechanism contributes to the methane levels observed in lakes’ oxic waters. “It’s interesting that they identified this process,” says David Bastviken of Linköping University in Sweden. “It may be important, it may not be. We do not know.”

Bastviken says he suspects that horizontal transport of methane from shallow, anoxic zones toward surface waters above deeper zones may be the main source of methane at freshwater surfaces. Frank Peeters, head of the environmental physics group at the University of Konstanz’s Limnological Institute in Germany, also points out that the mechanism Maresca identified operates in low-phosphorous conditions, and “most lakes have substantially larger phosphorus concentrations than the limiting value.” It is possible, he added in an email, that the depth at which temperature and oxygen concentration change drastically—the thermocline and oxicline, respectively—change seasonally. “The high methane concentrations typically found in the deep water might extend to depths shallower than 100 meters during some years or seasons,” he speculates.

Maresca says it will be important to figure out how much these various methods contribute to methane levels at the surfaces of freshwater systems to better model their contributions to global methane cycling. “Globally, freshwater produces a lot of methane and we don’t know how much and how [these bodies of water] do it.”