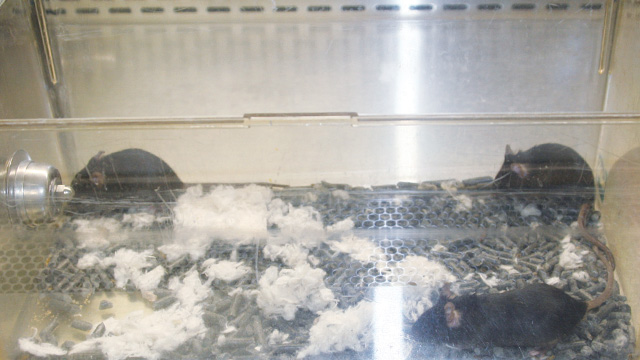 In 2003, glycobiologist Yu Yamaguchi received a phone call that would change the course of his scientific career.

At the time, the Sanford-Burnham Medical Research Institute scientist was studying heparan sulfate (HS), a polysaccharide active in all animal cell types. He scoured the brain for HS and found it concentrated around synapses after they had fully developed.

Yamaguchi was surprised to hear a woman on the other end of the phone identifying herself as a mother. However, Sarah Ziegler isn’t just any mother. When she learned that her son had a rare bone disease called multiple hereditary exostoses (MHE), in which unchecked cell growth forms hundreds of painful though benign tumors in a child’s bones, she founded the MHE Research Foundation to fund scientists working on treatments. She called Yamaguchi because she...

Two-thirds of MHE cases are caused by a mutation in the gene Ext1, which normally encodes a protein that assists in the formation of HS. Ziegler asked Yamaguchi flat-out if he knew that his polysaccharide was linked to the devastating disease. “At that time I was aware of it, but I did not pay much attention to it,” he recalls. After all, what would a bone-growth disorder have to do with the synapses formed in the brain?

But Ziegler was not calling to talk about osteology. She suspected that her son not only suffered from MHE but was on the autism spectrum. She explained the symptoms to Yamaguchi: avoidance of social interaction, repetitive behavior, and communication problems. “Teachers and physicians think that the shyness or peculiar personalities [of kids with MHE] may be the consequence of this traumatic experience,” he says. “So they didn’t pay any attention to these other symptoms.” SUGAR-FREE MICE: Normal mice display social behavior, nesting together in a corner of their cage.
FUMITOSHI IRIE AND YU YAMAGUCHI

Yamaguchi developed a mouse model to study the effects of mutant Ext1in the brain. But he and his lab mates had no experience studying behavior, so they had to train themselves “entirely from scratch,” he says.

The mice seemed normal to Yamaguchi. But as they sexually matured, he noticed that they weren’t building nests like normal mice. And more complex behavioral tests detected all three core symptoms of autism. The male mice didn’t sing to females, suggesting communication issues, and were uninterested in exploring, instead repeating the same motions over and over again.

Yamaguchi found that, during social interactions, his model mice had significantly lower activation in their amygdalae, the brain region associated with emotion and memory. Zooming in even further, Yamaguchi identified a problem with the placement of glutamate receptors in the brains of these mice. Glutamate, an amino acid and the major excitatory neurotransmitter, has recently been linked to several autism-spectrum disorders, including the relatively common Fragile X syndrome.

“Just looking at electrophysiology and glutamate, you can’t say that it’s autism; it could be anything,” says pharmacologist Shashank Dravid of Creighton University Medical School. “But you could say that these mice probably have some behavioral deficits associated with social or emotional behaviors.”

That changes in such a seemingly insignificant sugar as HS could cause such a variety of problems is not entirely surprising, says Jerry Turnbull, a glycobiologist at the University of Liverpool. “Heparan sulfate is very multifactorial in its functions, so one single deficit or change in the overall structure could impact a number of different pathways.”

But Blanchard suspects that this isn’t just a coincidental finding. In her autism studies she uses the widespread BTBR mouse model, which is inbred and asocial. Recently, she found that these mice also have a problem with their HS, hinting at a common mechanism. “I don’t know if heparan sulfate is going to turn out to be the mother lode or not,” she says. “But at least for right now, it has a way of focusing our attention on the possibility of some common mechanisms that—nevertheless—can have a range of important effects. It’s a very good place for autism research to go.”