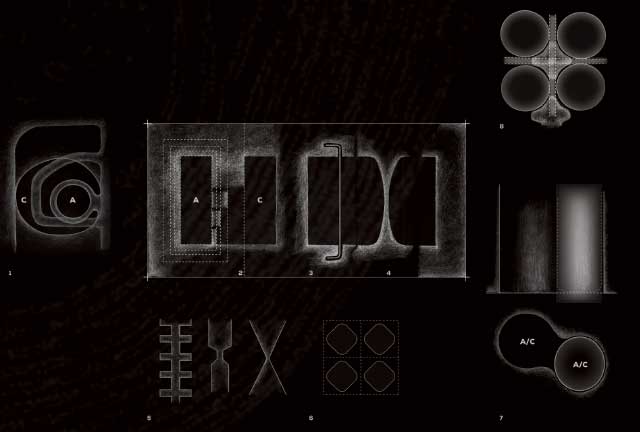 PROTONIC WINDOWS: These exploratory drawings of the construction of microbial fuel cell-containing building materials aim to generate questions and prototypes that can be tested experimentally.SIMONE FERRACINA/LIVING ARCHITECTURE CONSORTIUM

Bristol Robotics Laboratory, on the grounds of the University of the West of England (UWE Bristol), is a clean, dynamic place. Thin partitions separate researchers sitting next to their meticulously designed robots in a huge, open-plan think tank. But down the hall is a separate room, cut off from the hubbub.

Ioannis Ieropoulos and Gimi Rimbu have not shared why their lab is sealed off from the rest of the site as we open the door and take our first step inside, so it’s a shock when we’re met by an odor that brings tears to the eyes. The vile smell that Ieropoulos’s and Rimbu’s acclimated nostrils barely notice? Wastewater—delivered a few days prior from the local sewage treatment...

Rimbu describes how each six-hole brick houses three microbial fuel cells (MFCs). In one hole sits an anode and, in another, the cathode. “In the hole with the organic waste, water is oxidized,” he says. “And in the other, the water is recombined on a carbon substrate which is the electrode. And from this, you clean the water, produce electricity, and harvest small quantities of useful compounds.” Connected with crocodile clips and wires, two of these bricks can power a digital thermometer.

The malodorous bricks in Bristol Robotics Laboratory are part of the wider Living Architecture (LIAR) project, an exploratory multinational collaboration funded by the European Union’s Horizon 2020 Framework Programme to build a prototype freestanding partition composed of up to three types of bioreactor building blocks. The first is Ieropoulos and Rimbu’s MFC. The second is an algae bioreactor, a sealed container of algae that grows and produces biomass or sucks up CO2 from the surrounding air. The third involves programmable synthetic microorganisms that can act like a metabolic app to produce any product the researchers desire.

Only the insane would want urine running inside the walls of their house.—Andrew Adamatzky
University of the West of England, Bristol

LIAR was originally conceived on Christmas Eve 2013 when Andrew Adamatzky, an expert in unconventional computing from UWE Bristol, and Rachel Armstrong, a University of Newcastle experimental architect, started talking. They envisioned “a gut-building or kidney-building which takes away your metabolites,” says Adamatzky. “But we realized gut analogies are not that sexy for the general public.” Since then, the project has morphed into a mission to make buildings literally come alive brick by brick. Essentially, LIAR’s living bioreactor bricks will use sunlight, wastewater, and air to generate oxygen, electricity, proteins, and biomass.

Biomimicry is fashionable in architecture and engineering, but LIAR is a step beyond simply aping natural processes or forms. “Living architecture is where things are not ‘like’ biological systems, they have original physiology and perform ‘as’ living things,” Adamatzky explains.

Each bioreactor acts as an elementary processor that can communicate locally with its neighbors, meaning an array of bioreactors arranged as a wall acts as parallel processor. “Bioreactors have several innate capabilities, such as sustainability, adaptability, and parallel operation, which traditional silicon-based electronics struggle to replicate,” adds UWE Bristol’s Neil Phillips. LIAR aims to utilize these abilities to provide a type of unconventional computing capability, which would be difficult or impossible to achieve through established technology.

For example, using the electricity it produces, a living-wall bioreactor array could self-assess its own health and even solve tasks a conventional computer solves using silicon chips. As an analogy, the GeForce GTX 780 graphics card has 2,304 CUDA cores. Likening each brick to one computing core, the ~20,000 bricks needed to construct a typical 4–5 bedroom detached house represent the same computing power as 10 GeForce graphics cards. “That is enough computing—in principle and we are talking about the distant future—to do real-time physical modeling of the behavior of all occupants,” essentially merging the fields of artificial intelligence, supercomputing, and green energy production, explains Adamatzky.

While a programmable living house may sound outlandish, Armstrong is keen to highlight that LIAR’s aims are grounded. “This is not a paper project,” she says. “It is not speculative; it’s high-risk, but implementable.” Others working in microbial electrochemical technologies see great potential in the LIAR project. “This would be an innovative approach to exploit the capabilities of MFCs for sustainable architecture,” says Iowa State University mechanical engineer Nicole Hashemi, who recently demonstrated electricity production from the world’s first paper-based MFC.  But, she warns the MFCs “may face issues with biofouling or specifically macrofouling in regions where biofilm formation is not intended.”

Korneel Rabaey from Ghent University in Belgium sees further problems. “Do not expect any notable current to come from these systems,” he says. “Also, stability in the longer term may be challenging. If the system requires maintenance then logistics will need to be developed, and an additional challenge is to show that the power coming off the wall can be harvested.”

Back in Bristol, Rimbu has two goals for the next few months: to build an actual 3 ≈ 3 meter prototypical wall made of MFC bricks and to replace wastewater with another renewable resource—human urine. “The electrical output should be two or three times better, as there are some chemicals and ions in urine that the microbial fuel cells like,” he notes.

Whether or not home owners will buy into the idea of their dwellings digesting their own waste matter may be a moot point as “only the insane would want urine running inside the walls of their house,” jokes Adamatzky.

But Ieropoulos argues that we already have toilet plumbing running through our households, and there is only odor when something goes wrong. “The same applies for living architecture,” he says. “Especially since the technology is actually helping bring down the smell from human waste.”