When a beetle larva bites into the leaf of a goldenrod plant, a perennial herb known for its bright yellow flowers, it gets a mouthful of food to fuel its growth. But the plant’s perspective is rather different. The bite damages the goldenrod (genus: Solidago), causing it to launch molecular defenses against the insect and to emit a concoction of chemicals that change the physiology of goldenrod plants nearby. It’s as if the plants are communicating about the invader.

For researchers studying plants’ responses to herbivory, the reasons for this communication are something of a mystery. “We don’t have a good understanding of why these plants are emitting these cues,” Rick Karban, an entomologist who studies plant communication at the University of California, Davis, tells The Scientist. “We don’t even know if the cues that plants are emitting—that other plants can perceive and respond to—are somewhat intentional,” or just a byproduct of leaf damage.

Plants aren’t merely
eaves­dropping on one another.

The notion that plants communicate was controversial until the end of the 20th century. Biologists first argued that trees and plants could “talk” to one another in the 1980s, but data supporting the idea were dismissed by many researchers as statistically sketchy. Over the past few decades, however, the scientific community has revised its opinion. A series of papers have shown that when a plant such as goldenrod is damaged, it releases volatile organic compounds (VOCs) that prompt neighboring plants to mount their own chemical defenses against an impending herbivore attack. Karban says researchers are now focused on why the emitting plant puts out this signal, and whether it derives a benefit from telling those around it that it’s being eaten.

It’s possible that surrounding plants are merely eavesdropping on the signal emitter, which derives no benefit from the situation. Researchers have also proposed two alternative hypotheses that involve a benefit to the emitter. The first—the kin selection hypothesis—states that the plant emitting the signal indirectly benefits thanks to the increased survival of genetically related individuals in its vicinity, even if the plant itself is damaged by herbivory. The second—the mutual benefit hypothesis—posits that the plant emitting the signal directly benefits from communication because the preemptive chemical defenses launched by all its neighbors result in a hostile environment that encourages the herbivorous insect to move away from the area.

Finding evidence to distinguish between these scenarios hasn’t been easy, especially because plant communication is a small field. But a long-running project offers new clues. In 1996, a team at Cornell University started an elaborate experiment on one goldenrod species, S. altissima, regularly spraying rows and rows of the plant with the insecticide fenvalerate, while leaving other rows untreated. After 12 years, the researchers collected plants from each of the rows, brought them to the lab, snipped the stems, and grew clones. Then, the team set up collections of the clones in pots at a nearby farm, let goldenrod beetle larvae munch on some of the plants, and measured the emission of VOCs. 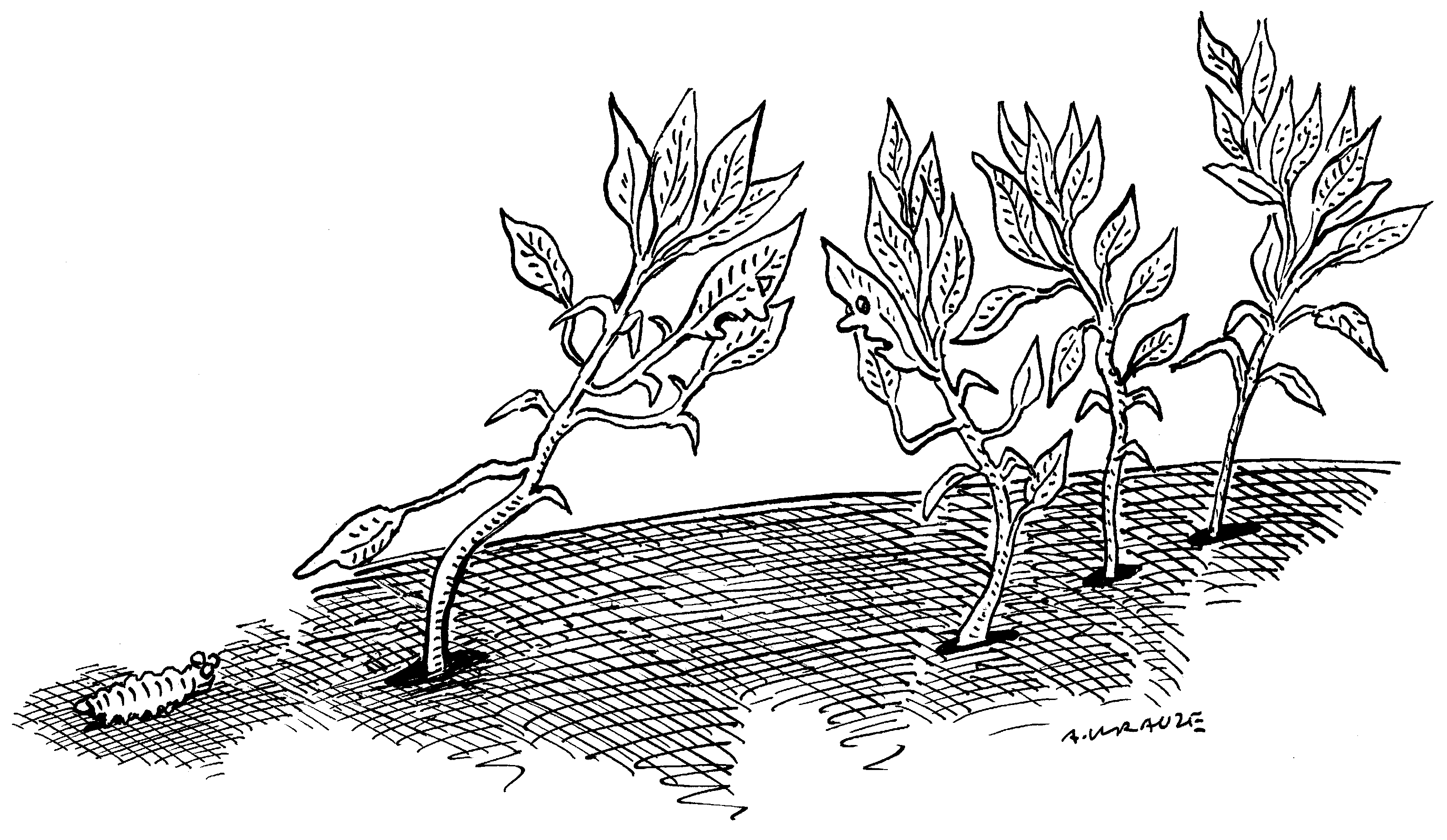 “This research was really mostly curiosity driven,” says Aino Kalske, a postdoctoral researcher in ecology and evolution biology at the University of Turku in Finland and a former graduate student at Cornell who helped with the experiment. She and her colleagues were particularly interested to see if the goldenrod’s chemical messages would evolve differently depending on whether the plants had been treated with insecticide and were protected from insect attacks or had been left untreated and experienced higher levels of herbivory. Differences in signaling between the treated and untreated plants’ descendants might be a small step toward determining which hypothesis about plant communication was correct.

The team found that VOCs emitted by goldenrod plants whose predecessors had been sprayed with the insecticide only induced genetically identical plants to mount preemptive chemical defenses to insect invasion—consistent with the kin selection hypothesis. But VOCs emitted by goldenrod whose predecessors hadn’t been sprayed with the insecticide induced the preemptive defense from all the other goldenrod plants around them, even plants that weren’t their kin—consistent with the mutual benefit hypothesis.

Additionally, the plants exposed to herbivory converged on a shared VOC signal over the course of the study—with all of the goldenrod plants eventually emitting the same chemical signals whether they were genetically identical to the emitter plant or not. Plants treated with insecticide showed no such signal convergence, the researchers reported in Current Biology last September. This sort of convergence on a single chemical signal is thought to benefit plants exposed to herbivory by providing a stronger deterrent against invading insects or a stronger attraction for the herbivores’ natural enemies. Kalske says the study provides the first concrete evidence that plants aren’t merely eavesdropping on one another, and that the emitter derives a benefit from releasing its chemical messages.

“The main value of the paper is the extremely long-lasting experiment needed to assess an evolutionary change in an organism,” Emilio Guerrieri, a researcher at the National Research Council of Italy’s Institute for Sustainable Plant Protection who was not involved in the study, writes in an email to The Scientist. The experiment, he says, “represents a sound demonstration that herbivores shape the VOC emission of a plant.”

Researchers still don’t know much about how the plants actually receive and respond to the VOC cues, Kalske notes, or whether the presence of other types of herbivores, such as mammals, influences similar signal changes. These are questions that the team would still like to answer, she says, not least because of the potential agricultural applications. “Understanding the intricacies of the plant world and plant-plant communication in more detail can potentially help us in plant protection in the agricultural context, if we can learn how to use these volatiles to turn on defenses in crop plants effectively.”