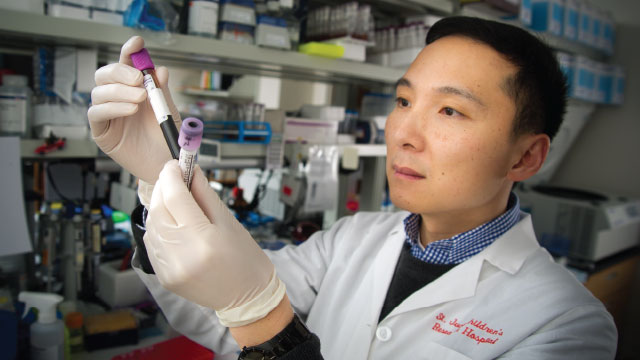 There are cancers with mutated genes, and then there’s hypodiploid acute lymphoblastic leukemia (ALL). This rare subtype of ALL, a childhood leukemia, is characterized by deletions of whole chromosomes—and worse survival rates than other subtypes. More than 90 percent of ALL patients, but fewer than half of pediatric hypodiploid ALL patients, survive with treatment. In 2013, researchers at St. Jude Children’s Research Hospital and colleagues looked into whether there was anything distinctive about the gene variants carried by patients with hypodiploid leukemia. Within a cohort they examined, they found, first, that the subtype itself has two subtypes; and then, in one of those, called low hypodiploid ALL, 91 percent of patients carried certain variants of the TP53 gene, which codes for the tumor-suppressing...

The finding made Jun Yang, a genetics researcher at St. Jude who wasn’t involved in that study, wonder whether germline mutations in TP53 might be implicated in more-common types of childhood leukemia too. To find out, he and colleagues combed through data from two clinical trials on 3,801 children with ALL. For each child, the researchers sequenced the coding regions of TP53; to find novel variants, they dug deeper by testing the alleles’ effects on the transcriptional activity of downstream genes in vitro, and by using a computer model to predict whether the variants might be pathogenic.

Children who’d been diagnosed with ALL were five times more likely to carry at least one copy of a putatively pathogenic TP53 mutation than were healthy controls, the researchers found. And among the children who’d had ALL, those with a pathogenic variant had a one in four chance of developing a second cancer in the five years after they went into remission—while those without such a variant had a greater than 99 percent chance of remaining cancer-free over that time (J Clin Oncol, 36:591-99, 2018).

Many families are very thankful for the possibility of cancer screening.—Kim Nichols, St. Jude Children’s Hospital

The team’s results reinforce findings on TP53 germline mutations that stretch back to the description of a rare, cancer-predisposing disorder known as Li-Fraumeni Syndrome (LFS) in 1969, says David Malkin, a pediatric oncologist at The Hospital for Sick Children and the University of Toronto who was not involved in the study but has collaborated with one of its authors. People with hereditary LFS are prone to develop a variety of cancers, often while relatively young; the syndrome has been linked to TP53 mutations in some families. But Malkin contends the new study stops short of proving TP53 mutations can cause ALL; to do that, he tells The Scientist, researchers would need to show that the leukemia cells of patients with the mutations express the bad copy of TP53, and not the good one.

Yang says that the results suggest that physicians should consider alternative courses of action for cancer patients who carry such a mutation, particularly when it comes to administering potentially DNA-damaging therapies. “I think it will be important to think twice before you give radiation, especially total body radiation, to these children with TP53 variants. You might have to explore other, less genotoxic therapy,” he says. What’s more, once the cancer goes into remission, these patients could be monitored closely in order to catch any second cancer early, he adds.

As it turns out, St. Jude began a program in 2014 to capitalize on knowledge about genetics to improve care for children with cancer. Every cancer patient at the hospital is offered a consultation at the institution’s genetics clinic, explains the clinic director, Kim Nichols, who was a coauthor on the new paper. Those patients whose physical exam or family history indicates cancer predisposition variants are offered genetic testing. The testing offers peace of mind for families whose children’s results come back negative for such variants, she says—only about one in 10 pediatric cancer patients carries a known predisposition variant. But for the families of those who do, “it’s very difficult, because the molecular testing makes it a reality and no longer just a possibility,” she says. Knowing he or she is at a relatively high risk of future cancers is “a reality that the child is going to need to live with lifelong.”

Nichols concedes it’s not always possible to avoid therapies that could raise the risk of a second cancer for patients with predisposition variants. “Sometimes you just have to do what you have to do to take care of the first cancer,” she says. “My hope in the future is that by understanding how these predisposition genes do what they do, how mutations affect the function of the encoded protein, we can develop targeted therapies” that aren’t as damaging.

In the meantime, doctors can take advantage of the knowledge that a patient has a predisposition gene by implementing an aggressive screening program for second cancers. “If you monitor [a patient with a predisposition variant], you’re not going to prevent a second cancer from occurring, but if you pick it up earlier, it’s so much more treatable,” Nichols says. “The surgeries are usually easier, [and] oftentimes you may not need to use chemotherapy, or you can use less-intense chemotherapy.” Depending on the gene variant, patients whose first cancer has gone into remission may need to come back every 3-12 months for these screens. In one study, led by Malkin, people carrying known TP53 pathogenic mutations who opted for surveillance and were later diagnosed with cancer had an almost 90 percent five-year survival rate, while those who developed cancer after opting out of surveillance had a lower than 60 percent survival rate (Lancet Oncol, 17:1295-1305, 2016).

But much remains to be done on the basic-science front to better understand how to help people who carry predisposition variants. For example, Yang’s study turned up 27 variants of unknown pathogenic significance in the TP53 genes of ALL patients; his team plans to investigate their biological consequences. He also hopes to identify therapies that could improve the outcome for patients with TP53 variants. The researchers also reported that many of the TP53 germline mutations were found in those members of the cohort with low hypodiploid ALL—but questions remain, notes cancer genetics researcher Sabine Topka of Memorial Sloan Kettering Cancer Center (who was not involved in the study), including: “What is the significance of this very strong association of TP53 variants and the hypodiploid phenotype of ALL? Is it because of the genomic instability that this hypodiploid phenotype arises, or is it a different causal relationship? That is not really clear.”

Despite such uncertainties, families who find out one or more of their members carries a predisposition gene don’t tend to succumb to fatalism, Nichols says. “My experience has been that families get over that initial distress, and many in the end find it empowering. They can now use this information to change what they’re doing at home . . . [and] really try to make sure the family lives a healthy lifestyle. Many families are very thankful for the possibility of cancer screening.”