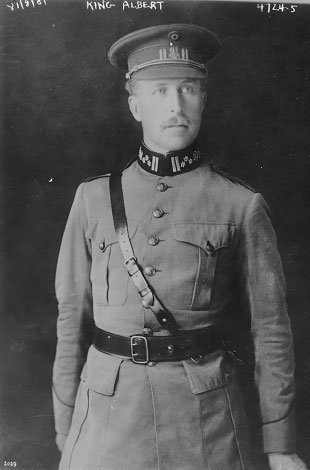 LONG LIVE THE KING: Conspiracy theories about the death of King Albert I of Belgium are being laid to rest thanks to modern genomic technology.© WIKIMEDIA COMMONS/LIBRARY OF CONGRESSIn 1934, King Albert I of Belgium died in a rock-climbing accident at the age of 58. Eighty years later, Belgian TV journalist Reinout Goddyn purchased some bloodstained leaves supposedly collected from the site of the accident after the body was discovered in the middle of the night. He wanted to settle the conspiracy theories that circulated after the king’s death, which no one had witnessed.

In 2014, Goddyn reached out to Dieter Deforce, director of the Laboratory of Pharmaceutical Biotechnology, Forensic DNA, at the University of Ghent, Belgium. “He asked if I could do a DNA analysis to prove if it was the blood of the king or not,” recalls Deforce, who was hesitant to help because doing...

It could be also the blood of his brother, but he died many years before King Albert I. There is only one person who can give this blood.—Maarten Larmuseau,
University of Larmuseau

Watching that broadcast was forensic geneticist Maarten Larmuseau, a postdoc at the University of Leuven, Belgium. But Larmuseau was not satisfied with the results Deforce and Goddyn presented. “That was not the end of the story,” he says. “You had to identify with DNA if the blood indeed belonged to the king or not.” He reached out to Deforce, who connected him with Goddyn, and the journalist immediately agreed to the project. Larmuseau also contacted two distant relatives of King Albert I—one on the dead king’s father’s side and one on his mother’s side. He planned to compare both Y chromosome and mitochondrial DNA sequences between the living relatives and the blood recovered from the site of King Albert’s demise.

The family members agreed, and Larmuseau paid them each a visit to collect saliva samples. He also sampled the blood from Goddyn’s leaves. Because the blood was 80 years old, the DNA was highly degraded, but thanks to advances in technologies to deal with such poor-quality samples, Larmuseau and his colleagues were able to run the comparison on 42 Y-chromosome loci and sequence the entire mitochondrial genome. The DNA from the blood was a match with both the Y-chromosome loci of his paternal relative and the mitochondrial sequence of his maternal relative (Forensic Sci Int Genet, 24:202-10, 2016).

“It could be also the blood of his brother, but he died many years before [King Albert I],” Larmuseau says. “There is only one person who can give this blood.”

“It’s like a jigsaw puzzle; you’re trying to put it together and determine what the picture is,” says Michael Baird, chief science officer at DNA Diagnostics Center in Fairfield, Ohio. “The more pieces you have to work with the more likely you are to get the picture and be able to determine what it is. . . . I thought they did a very thorough job in the analysis and were able to identify with a very high degree of certainty who [the blood] was from.”

But the genetic analysis was the easy part, says Larmuseau. Once the researchers had their results, “that’s when the problems started.” They didn’t know how to publish. The raw data contained the Belgian royal family’s sensitive genetic information. Comparisons of the Y-chromosome data with other family members’ DNA sequences, for example, could identify cases of infidelity, says Larmuseau. Certain mutations on the Y chromosome could also indicate infertility or risk of disease, and publishing mitochondrial sequences carries similar ethical and privacy pitfalls. On the other hand, the researchers couldn’t exactly omit the raw data altogether and just ask paper reviewers and the scientific community to take their word for it.

After speaking with other researchers, including several bioethicists, Larmuseau and his colleagues decided to get two independent experts to validate the data and results. Walther Parson of the Institute of Legal Medicine at Innsbruck Medical University in Austria reviewed the mitochondrial data, and Lutz Roewer, a forensic geneticist at the Institute of Legal Medicine and Forensic Sciences at the Charité University Hospital in Berlin, reviewed the Y chromosome analysis. “I totally agree with the authors that such genetic data should not be published and should not be available to the public via the publication,” says Roewer. “It’s a family case and that’s private data. If there is external review that the approach is correct and that the raw data are correct, then it’s enough.”

Larmuseau says that, in addition to personal and historical curiosity, the ethical issues surrounding the publication of historical genetic data is what motivated him to reach out to Deforce and Goddyn in the first place. “For me it was immediately clear that we had to deal with a lot of ethical questions,” he says. “It’s a sample which is not taken during medical care, so there are no ethical guidelines [regarding the data]. . . . I wanted to make that clear with this sample.”