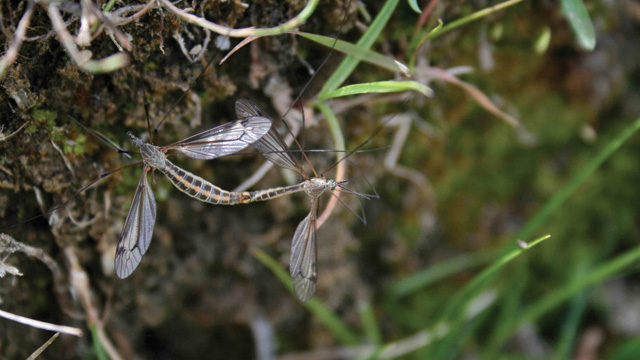 Almost every year for the past decade and a half, a crew of about 20 entomologists, water ecologists, meteorologists, and other specialists converges on the shorelines of Mongolia’s lakes, rivers, and streams, just when swarms of aquatic insects do the same.

For three arduous weeks, teams traverse the sparsely populated countryside by jeep, helicopter, horse, and on foot. They sweep nets, set traps, flip rocks, dig into the soils, and sample water in order to collect as many insects as possible. The specimens are then sent to specialists around the world, who identify them and prepare them for museum collections.

Led by Jon Gelhaus, a curator of entomology at The Academy of Natural Sciences of Drexel University and a specialist in crane flies, the Mongolian Aquatic Insect Survey...

“A big part of the focus for everybody involved is training young Mongolians to be aquatic scientists and to be able to understand the insect fauna in their streams.”
—Jon Gelhaus, Academy of Natural
Sciences of Drexel University

Gelhaus first visited Mongolia in 1996 to assist Academy colleague Clyde Goulden with a comprehensive ecological study of Lake Hövsgöl in the northwest of  the country. For 2 years, Gelhaus sampled populations of crane flies along the lake’s shore and its feeder streams while the other team members studied fish and insect populations, water chemistry, geology, and meteorology.

In the early 1990s, Mongolia had just opened its doors to the West, after ending nearly 70 years of Soviet rule. Not only was the country struggling to make the transition from communism to democracy and capitalism, it was lacking in scientific expertise and infrastructure—so data on its native insect fauna was scant.

“The knowledge that was available had been acquired almost exclusively by foreign scientists,” says John Morse, a Clemson University entomologist who also worked with Goulden at Lake Hövsgöl in the 1990s and continues to co-lead the Mongolian Aquatic Insect Survey. “They just didn’t really have the facility to do much.”

Mongolian entomologists were still using World War II-era Russian microscopes to examine insects, Morse remembers. “They were pushing these microscopes up to a fluorescent tube that ran down the center of the table and directing their mirrors toward those fluorescent tubes to try to get enough light on the specimens.” ON THE HUNT: Mongolian researchers and students return from sampling the water chemistry and aquatic insects of the Bulgan River, Khovd Province, Mongolia, in June 2009.
JON GELHAUS

In 2002, Gelhaus, Morse, and Barbara Hayford, a researcher at Wayne State College in Nebraska who studies nonbiting midges, obtained a grant from the National Science Foundation to extend the original Lake Hövsgöl project to include the Selenge River basin, the major watershed connecting Lake Hövsgöl to Lake Baikal in Russia. The researchers were able to set up laboratory space at the Institute of Meteorology and Hydrology in Mongolia. “We equipped it and hired young Mongolian people to staff it,” Morse explains. The staff was tasked with identifying and curating the specimens collected by the team and making them accessible to other institutions within Mongolia, an effort that continues today.

“A big part of the focus for everybody involved is training young Mongolians to be aquatic scientists and to be able to understand the insect fauna in their streams,” Gelhaus says.

Starting in 1998, Morse organized courses at various Mongolian institutions to teach aspiring entomologists how to use aquatic insects to monitor water quality in Mongolia. Among his first batch of students was Oyunchuluun “Oyunaa” Yadamsuren, then a sophomore at Mongolia’s State Pedagogical University, who early on expressed an interest in crane flies. Morse connected her with Gelhaus, who hired her to help survey the Selenge basin and arranged for her to spend a month at the Academy of Natural Sciences in Philadelphia in 2003. It was the first time Yadamsuren had ever left her country.

In Philadelphia, Gelhaus taught Yadamsuren how to meticulously preserve and identify insects as well as how to develop experimental designs and write scientific papers. “It can be said that Dr. Gelhaus taught me everything, beginning with the ABCs of scientific research,” Yadamsuren says.

“Now these are young scientists that can really make a difference in Mongolia and are in positions where they are teaching or are in policy situations,” Gelhaus says. Mongolian students and scientists have even recently established a professional society of freshwater entomologists.

Yadamsuren is currently pursuing her PhD in Morse’s Clemson University lab. Like many of her peers, Yadamsuren plans to return to Mongolia and use what she’s learned to preserve her country’s water quality, which has been degraded by overgrazing, deforestation, mining, climate change, and urbanization.

In 2008, Gelhaus and his colleagues won a second NSF grant to explore the aquatic insects of the Altai and Hangai mountain ranges in western Mongolia. To date, Morse, Gelhaus, and Hayford have succeeded in doubling the number of caddisfly, crane fly, and nonbiting midge species known in Mongolia and have discovered dozens of new species. Gelhaus named one of the new crane fly species Gonomyia oyunaae, after Yadamsuren.

“Eventually we want to walk away and be really happy that Mongolians can do this research and that we’ve left them with this area of expertise that they can call their own,” Hayford says.