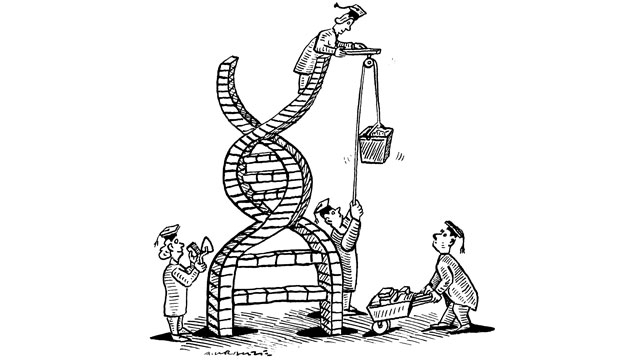 James DiCarlo was only a freshman at Johns Hopkins University in the spring of 2007 when his research advisor, Jef Boeke, approached him about taking a new class Boeke was putting together.

“Do you think students would be interested in a class about synthetic biology and building genomes?” DiCarlo recalls Boeke asking.

“I was like, ‘Yeah, that sounds awesome, I would take that class,’” DiCarlo, now a grad student in biomedical engineering at Boston University, recalls.

That class was Biology 420, aka Build-a-Genome. Instead of concentrating on typical cookbook-style experiments, Build-a-Genome teaches undergrads the fine points of synthetic biology and then turns them loose to rebuild their own 10-kilobase slice of yeast chromosome three. The course, a kind of lab class–cum-independent project, was conceived as part of an international yeast genome engineering research consortium called Sc2.0.

Bioinformatics has become such an integral part of research. And being...

Boeke, director of the High Throughput Biology Center at Hopkins, has actually “franchised” Build-a-Genome, with satellite operations established or planned at North Carolina State University, Loyola University Maryland, Hartwick College in New York, and Tianjin University in China. According to Lisa Scheifele, a former Boeke postdoc and assistant professor at Loyola, the beauty of Build-a-Genome is that it doesn’t require additional infrastructure to get started. “The techniques are basic molecular biology techniques,” she says—things like PCR, cloning, and gel electrophoresis. “What’s different is how you’re using them and the questions you’re asking.”

DiCarlo describes the course as “fully immersive,” and it does indeed sound like being thrown into the deep end of the pool: “You’re given the tools and you’re taught how to do it, and then you’re kind of sent off, and they say, ‘Okay, go do it,’” he says. “There are trials and tribulations associated with that, but it’s a great learning experience.”

There are, in fact, a number of such courses popping up in undergraduate curricula across the nation, many of which focus not so much on techniques as on bioinformatics.

“Bioinformatics has become such an integral part of research. And being able to do this, to use these tools in an informed way and in a way that’s somewhat discerning . . . is really important,” explains Cheryl Kerfeld, director of the Genomics and Bioinformatics Education Program at the Department of Energy’s Joint Genome Institute (JGI). “There’s no reason we cannot start doing this at the undergraduate level.”

This focus on data analysis has also taken hold at Kerfeld’s old digs. Prior to joining JGI in 2007, Kerfeld established an intercollegiate program at the University of California, Los Angeles, called the Undergraduate Genomics Research Initiative. Students learned the ins and outs of old-school Sanger sequencing methods and bioinformatics as they slowly cloned, sequenced, and annotated the genome of the bacterium Ammonifex degensii.

Today, such an exercise is obsolete. Instead, as of 2011 all students in UCLA’s departments of Microbiology, Immunology, and Molecular Genetics (MIMG) and Molecular, Cell, and Developmental Biology must complete a two-quarter, omics-focused research experience (unless they work independently in a research lab), explains MIMG professor Erin Sanders.

Students in the program’s five interdepartmental courses perform independent projects around a central theme during the first quarter, and analyze their data during the second. In one course, the students isolate and characterize novel viruses from their own skin that can infect and kill the bacteria that cause acne; they then sequence those samples (using 454 sequencing technology) and perform annotation and comparative genomics. Other students use in situ hybridization to study gene expression in sea urchins and then build phylogenetic trees for the genes they’ve characterized.

In such a program, Sanders says, the projects are discovery-based. “The students are actually knowledge producers rather than knowledge consumers,” she explains. In addition, the students learn to read and analyze scientific articles, think critically, and present their data. The experience is vastly different than in most undergraduate labs. “Here, they constantly have to troubleshoot, and the expectations [for] the students are so much higher. They can’t just come in and coast through the course,” Sanders says. And, she emphasizes, each student discovers something new: “We are actually writing a paper in one case.”

Students learn similar skills and independence in Build-a-Genome. According to DiCarlo, that experience gave him confidence and self-reliance, traits he recognizes as important now that he’s a PhD candidate.

But the best part of the course, he says, was a side project he began during the semester and pursued through graduation. That project involved figuring out how to transfer all the tRNA genes from yeast chromosomes onto an extrachromosomal plasmid. As part of that work, DiCarlo attended lab meetings where he presented his progress—and got put in the hot seat more than once—an experience that helped prepare him for his PhD qualifying exams.

“I found that very useful, and kind of fun,” he says of the good-natured grillings during lab meetings. “Seeing what you don’t know helps you direct where you want to go.”