Nikolai Vavilov’s story has stuck with Longjiang Fan ever since he learned about the Soviet plant biologist during his undergraduate studies in China in the 1980s. Vavilov’s scientific ideas were both important and novel, explains Fan, now a crop scientist at Zhejiang University. Vavilov refused to renounce those ideas even when he faced a death sentence in the 1940s because his research on genetics and inheritance ran counter to the Lamarckian ideas favored under Joseph Stalin. He died of starvation in prison in 1943.

One of Vavilov’s enduring contributions to science is a concept known as Vavilovian mimicry. Based on his observations of domesticated oats and rye, as well as of their wild relatives, Vavilov proposed that the crops’ ancestors were weeds that, over generations, came to resemble domesticated wheat because wheat-like characteristics helped them avoid being weeded out by farmers. It was only after this transformation, Vavilov conjectured, that people began to purposely cultivate and eat these interlopers.

It’s just such a fasci­nating phenomenon, this evolution

of these weedy species that are exploiting crop environments.

Such human-driven evolution of weeds to resemble crop plants has never been conclusively demonstrated, Fan tells The Scientist. But recently, with genome sequencing becoming ever faster and cheaper, Fan thought the time had come to see whether genetic analysis of apparent weedy mimics would support Vavilov’s idea.

Fan chose to focus initially on a weed that seems to have evolved its crop-mimicking characteristics in China: barnyard grass (Echinochloa crus-galli), a variety of which takes on a rice-like appearance early in its lifecycle. This mimicry had been documented in the early 1980s by University of Toronto plant evolutionary biologist Spencer Barrett, who proposed that hand weeding of rice fields had exerted selective pressure on the variety, driving it to grow upright like rice rather than spread out along the ground like its close relatives.

Fan’s team collected 328 specimens of barnyard grass from paddy fields throughout the Yangtze River basin—the epicenter of rice cultivation in China for centuries—and grew their seeds in a field and in a greenhouse to determine whether their seedlings had the rice-mimicking phenotype. The researchers also sequenced each plant’s genome and used the data to construct a phylogenetic tree of barnyard grass varieties. The mimic and non-mimic varieties diverged from each other about 1,000 years ago, the research team concluded, and the mimic’s genome showed evidence of selection in 87 genes thought to control plant architecture. The timeline, the researchers note in their paper, coincides with intensified rice cultivation in the Yangtze basin during China’s Song dynasty.

The results are consistent with the idea that humans, through hand weeding, provided the selective pressure that drove the evolution of the rice-imitating variety. It’s remarkable that Vavilov’s decades-old predictions align so well with the data, says Manyuan Long, a University of Chicago evolutionary biologist who was not involved in the research but wrote a review of the paper for the site F1000.com. Fan’s study, he says, is “really wonderful work.” Like Fan, Long remembers learning about Vavilov as an undergraduate in China in the 1980s. “Vavilov is my hero in science,” he says, although he notes that he hadn’t been aware of the idea of Vavilovian mimicry until he read Fan’s paper. 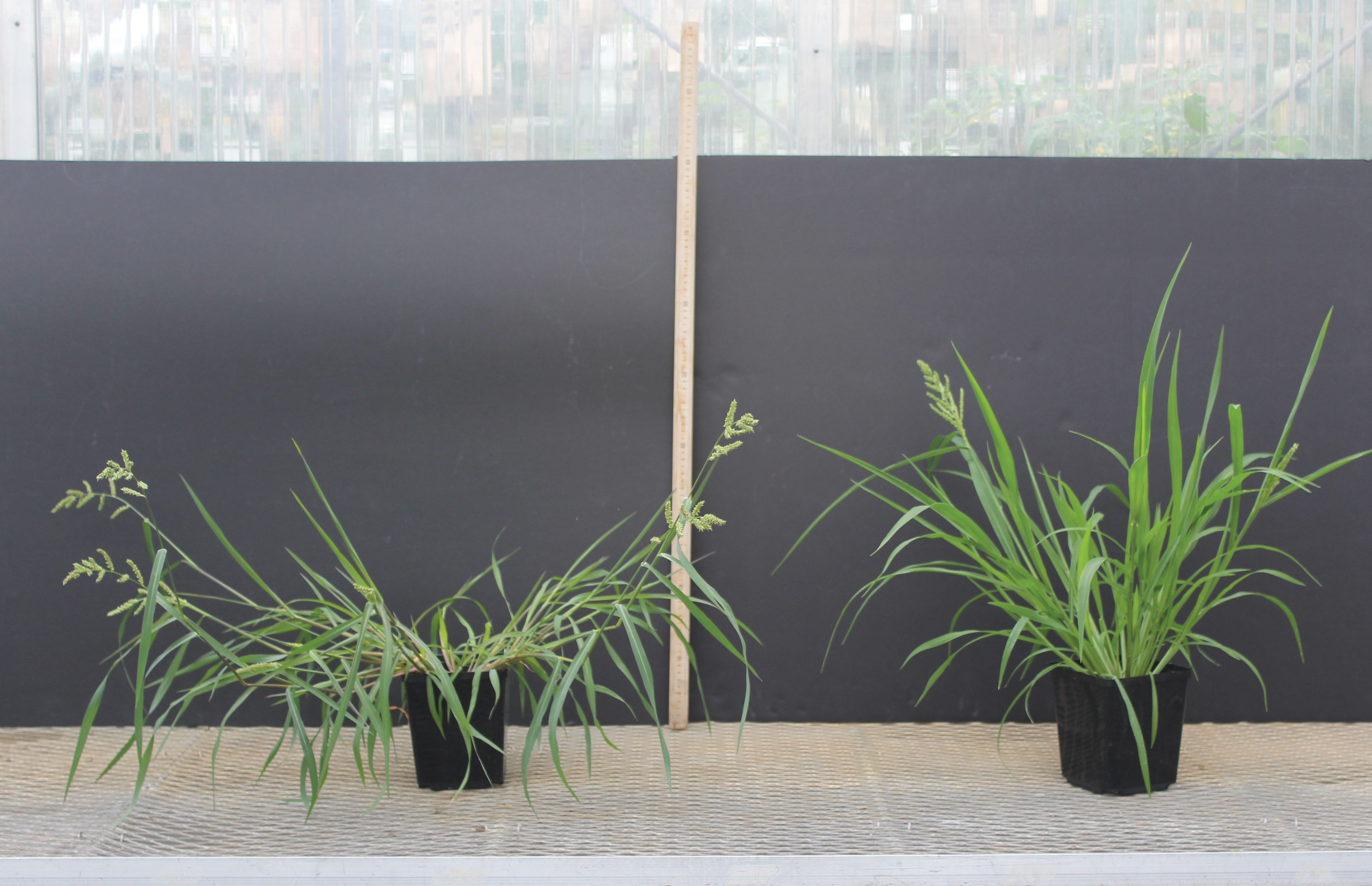 BLENDING IN: A variety of barnyard grass takes on a rice-like appearance early in its lifecycle (right), growing upright instead of staying low to the ground like its close relatives (left).
© Jordan R. Brock

Fan’s collaborator on the study, Washington University in St. Louis plant biologist Kenneth Olsen, says it was exciting to revisit Barrett’s work with the benefit of modern sequencing technology. “It’s really satisfying in a way to see these results at the genetic level and the genomic level,” he says. The results line up nicely with the known history of rice agriculture, he adds, but the study couldn’t confirm that the genes found to have been under selective pressure really do control the rice-like phenotype in barnyard grass. His group is now working on follow-up experiments to more conclusively determine the relationship between the mimics’ genes and phenotypes.

Olsen also studies a variety of rice known as weedy rice, an offshoot of domesticated rice that’s re-adopted some characteristics of wild plants that farmers find undesirable. Like other weeds, he explains, weedy rice plants are “aggressive competitors in crop fields. But at the same time, they aren’t actually wild species; they’re really specifically adapted to these agricultural environments that we’ve created.” Such a system, he explains, can lend insight into whether the genes that control certain traits differ between truly wild rice and domesticated rice with a rebellious streak. “It’s just such a fascinating phenomenon, this evolution of . . . these weedy species that are exploiting crop environments,” he says.

As Olsen takes a closer look at barnyard grass genetics, Fan is planning to apply the approach from their recent study to other species. His mind still on Vavilov, Fan wants to use genomic sequencing on rye and oat to see whether their phylogenies show evidence that they were selected based on mimicry of wheat.

Indeed, the barnyard grass study “adds an impetus to going after and looking at some of these other cases that had been well documented phenotypically, but not at the genomic level,” says Elizabeth Kellogg, a plant geneticist at the Donald Danforth Plant Science Center in St. Louis who collaborates with Olsen but was not involved in the new work. “That is, we don’t know what specific genes were selected, and I think there [are] clearly now opportunities to go after those specific genes.”