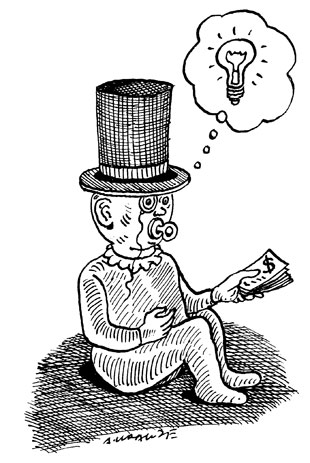 ANDRZEJ KRAUZEScott Shane, an economist at Case Western Reserve University who has been teaching entrepreneurship for 20 years, has heard it all when it comes to his undergraduates pitching ideas for new businesses. Some students put in extensive time and research to come up with a business proposal that flops when they try to express it as a convincing pitch. Others put in no effort and wing it after glancing over some information, but come up with a marvelous proposal. “It’s like an intuitive sense,” Shane says, “like they could see what the marketplace would want.”

In Shane’s field, business phenoms who so effortlessly produce innovative ideas and succeed at starting businesses are often referred to as “born entrepreneurs.” For years, Shane’s been interested in whether science could corroborate such a genetic endowment. So in 2008, he turned to a UK registry of several thousand twins to find...

A year later, Zhen Zhang, now a management professor at Arizona State University, followed up with another twin study, but added a twist. Zhang looked at the sex of the participants from a different twin registry and found that, for men, genetics had nothing to do with their becoming an entrepreneur. For women, on the other hand, starting a business was 65 percent heritable (Organizational Behavior and Human Decision Processes, 110:93-107, 2009). Zhang interprets the findings as having to do with the extra hurdles women face in business. Among women, he speculates, “only those people who are really determined, who have that genetic makeup [to their advantage], emerge as entrepreneurs because of the hardship in the environment.” For men, the social supports in the business community might help overcome any genetic disadvantage, Zhang reasons.

It’s like an intuitive sense—like they could see what the marketplace would want.—­Scott Shane, Case Western Reserve University

So what genes might be at play in influencing business acumen? Shane and others have turned to genome-wide association studies (GWAS) to hunt for single nucleotide polymorphisms (SNPs) that might be involved. His group and another headed by Roy Thurik, an entrepreneurship researcher at the Erasmus School of Economics in Rotterdam, Netherlands, showed that the genes, not surprisingly, are difficult to pinpoint. In two separate GWAS studies, the groups identified a number of promising SNPs, none of which, considered in isolation, amounted to more than 1 percent of the variance (International Journal of Developmental Science, 6:127-35, 2012; PLOS ONE, 8:e60542, 2013).

Shane has also taken a different tack, digging into the psychology of entrepreneurs. Studies have shown that entrepreneurs are known to have a higher likelihood for certain traits, such as thrill seeking or extroversion. Some researchers have suggested that thrill seekers have dopamine transporters and receptors that make the feel-good neurotransmitter less available, Shane explains, thereby driving them to seek out extreme stimuli to get a rush. Perhaps dopamine could explain the attraction to the high-stakes world of startups.

In 2011, in a study of more than 1,300 twins, Shane and his colleagues found evidence for a polymorphism in a dopamine receptor gene—a so-called “candidate gene”—that was associated with entrepreneurship and could explain 0.5 percent of the likelihood of becoming an entrepreneur (Small Business Economics, 36:151–55, 2011). “This is a tiny amount of evidence . . . but it’s the first evidence of a specific gene,” Shane says.

The results suggest that our biology might contribute to a decision as important and complex as career choice. But the candidate-gene approach, which analyzes genes already thought to be involved in a particular trait, as opposed to the unbiased approach of GWAS, is outdated and unreliable, says Thurik. He believes that GWAS could offer answers, if the right phenotype is measured and the right data are used.

“To establish something of any significance you need an immense data set,” says Thurik, adding that no data sets currently contain the right scale and measurements to properly look for genes involved in starting businesses. Thurik concedes that his own GWAS study also measured the wrong outcome, entrepreneurship, and instead should measure the underlying psychology that drives people to start a business. That being said, “with the wrong measure and the wrong phenotype, we came so close” to identifying candidate genes.

Thurik has shown that it is possible through GWAS to get down to the genetics of complex behaviors or traits. Last year, he and his colleagues identified SNPs associated with educational attainment (Science, 340:1467-71, 2013). While the results don’t point to an education gene, they demonstrate the utility of GWAS in such applications. “This is just opening a door with no practical implication, and this now should convince scientists or people who finance [such research] to do it better.”