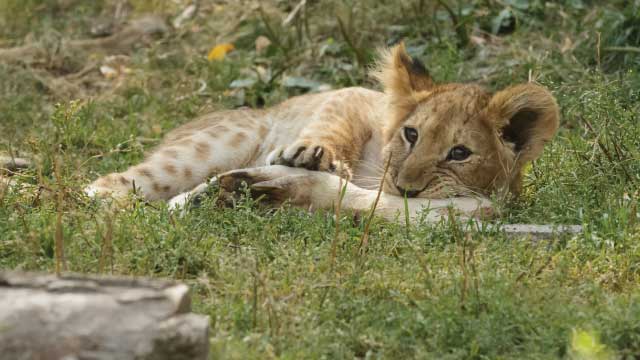 HOOFING IT: A lion cub at the Copenhagen Zoo munches on fresh meat. In 2014, meals for the zoo'a lions included a young giraffe euthanized and dissected at the facility.COPENHAGEN ZOO

In 2014, the Copenhagen Zoo grabbed the world’s attention by killing and publicly dissecting Marius, a healthy 24-month-old giraffe. Today, scientists still invoke Marius when talking about public engagement in the social media age, the role of zoos in society, and the complicated choices involved in animal management. Aarhus University’s Cathrine Sauer was at the zoo when Marius was put down, dissected, and fed to lions. But she wasn’t one of the hundreds of spectators. She was collecting data for her doctorate on the digestive function of giraffes.

Sauer, an animal nutritionist, defended her PhD thesis in November and has published several papers on the anatomy, digestive patterns, and intestinal microbiomes of giraffes in the wild...

But Sauer says we have much to learn about the physiology of animals such as giraffes. “Cows, goats, and sheep are well studied, but we don’t know much about the digestive system of exotic ruminants,” she says. “We need basic knowledge to better understand how to feed them.”

Tobias Wang also studied Marius for Aarhus University’s Danish Cardiovascular Giraffe Research Programme. “Because giraffes are the tallest living animal on earth, they have twice the blood pressure of other mammals,” says Wang, zoophysiology professor at Aarhus and scientific adviser for the Copenhagen Zoo. “But they don’t get the problems of humans with high blood pressure like heart enlargement, kidney failure, or edema in the legs. We’re interested in knowing why.”

Cows, goats, and sheep are well studied, but we don’t know much about the digestive system of exotic ruminants.—Cathrine Sauer,
Aarhus University

Sauer’s research was unique because of its scope. Opportunities to measure organs from exotic ruminants are rare, so similar studies on their digestive tracts typically include fewer than 10 animals. Sauer used data from 38 wild-caught or zoo-raised giraffes. This allowed her to do statistical analyses and detect significant variations from expectations. For example, she says, “we found that giraffes have smaller salivary glands than predicted, compared to other browsing ruminants. We’re asking ourselves the consequences of that. Maybe they don’t tolerate the tannins in browse as well as other species?”

The finding that some parameters deviate from expectations, such as salivary gland size, supports the need for large, comparative studies with comprehensive measurements. “The take-home message,” says Sauer, “is if you only examine digestive tracts, you have to evaluate more than a few parameters to predict the feeding ecology of an exotic ruminant.” Her work also highlights the fundamental difficulty of conducting basic research on exotic animals. Randomized trials with multiple control groups are impossible, so Sauer collected measurements opportunistically, when wild or zoo giraffes became available.

Marius was one such animal. As he matured, his father became increasingly aggressive toward him. Marius’s genetic background was already represented in the European zoo giraffe population with close relatives at other zoos, so he was removed from the group and euthanized before a public necropsy. The media attention attracted some protesters, “and lots of people to watch,” says Sauer. “We’d done public dissections before, but never with so much fuss.” The kids who attended were fascinated, she says, and “asked clever questions.”

Mads Bertelsen, a veterinarian at the zoo’s Center for Zoo and Wild Animal Health and an affiliate professor at the University of Copenhagen, explains the justification for the public event: “Most people see zoos as entertainment,” he says, “but we see ourselves as also doing education, research, and conservation.” Feeding Marius to the carnivores ensured that the entire animal was used, he says.

SNACKTIME: One of the Copenhagen Zoo’s lions, which were allowed to dine on the body of Marius, the young giraffe dissected at the facility in 2014COPENHAGEN ZOO“That’s what it’s like in nature,” adds Sauer. “Most Danes probably feel the same way.” Still, she says, the experience taught her the importance of media training and considering how news and images spread. “I’ve never met anyone who didn’t understand, if you sat and talked with them about what you are doing and why,” she says. “But that conversation takes time. On social media, you have only a few lines, so you can’t have that conversation.”

The Marius controversy wasn’t all bad, contends Cheryl Asa, director of the Association of Zoos and Aquariums (AZA) Reproductive Management Center, headquartered at the Saint Louis Zoo. “It’s been a chance to raise people’s consciousness about the complexity of managing zoos and conserving genetic diversity,” she says. The Marius affair also revealed a philosophical divide among zoos: some control breeding using contraception, while others allow natural breeding and cull animals later. The Copenhagen Zoo mainly lets animals mate and raise young, removing offspring when they would normally leave the group and euthanizing them if necessary for space or genetic diversity reasons. In US zoos, however, “the general approach is not to use euthanasia for management,” says Asa, stressing the safety of animal contraception. That said, “no one from the zoo community who spoke to me about the incident was critical of the Copenhagen Zoo’s euthanasia policies,” she adds.

Breeding policy is an evolving discussion as zoos come together to coordinate internationally on conservation, says Bertelsen. “For some species,” he says, “all the zoos in Europe, and now sometimes the world, are considered one population with a species coordinator planning breeding to maintain long-term diversity.” The coordination of global breeding programs is making zoos more collaborative, says Asa, and talking about policy differences will be good for the field. Even if zoos don’t change their practices, “at least they’ll have considered the alternatives,” she says. In the meantime, Danish zoos continue to use public dissections to educate the public about animal anatomy. In October, the Odense Zoo, 170 kilometers west of Copenhagen, created its own media splash by publicly dissecting a 9-month-old lion.

Correction (February 1): The original version of this story gave an incorrect age for Marius, He was 24-months-old at the time of his euthanization. Also, the image captions incorrectly indicated that they showed the zoo's lions eating the body of Marius. These mistakes have been corrected. The Scientist regrets the errors.